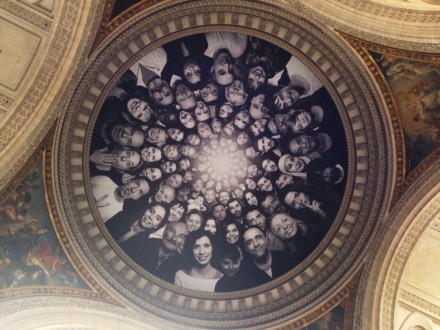 The 31-year-old French photographer and artist JR has completed an impressive installation for his global INSIDE OUT project, which allows participants to express themselves through photographing their own portraits and allowing JR to paste them in a new artistic statement.  The French artist started the project after he was awarded the TED prize in 2011, which gave him $1 million to make a world-inspiring idea to come to life.  Since then, INSIDE OUT has traveled across the country: California, New York, and Minnesota; and the globe: Italy, Brazil, Palestine, etc.  Now in Paris, JR has covered the floor, cupola, and dome of the Pantheon in Paris with 2,500 of his signature black and white portrait posters. 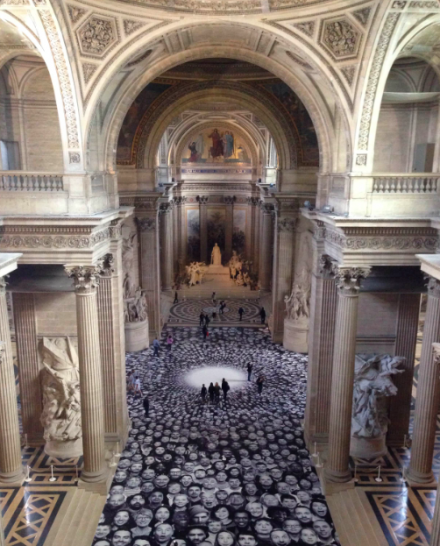 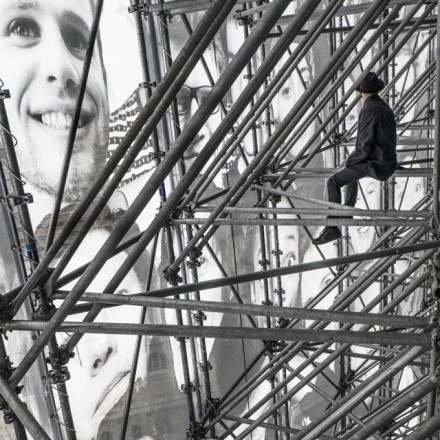 JR During the Installation of Au Panthéon!,  Courtesy of the Artist

The Pantheon, the burial temple for famous French figures such as Voltaire and Victor Hugo, is undergoing a massive reconstruction period that will last for at least ten years, and The Centre des monuments nationaux (CMN) has commissioned JR to turn the temple’s reconstruction into an artistic feat. The artist chose to continue with the INSIDE OUT portrait pastings to decorate the monument, and leave the space visuals to remind the public of the humanist aspects of its broader community. 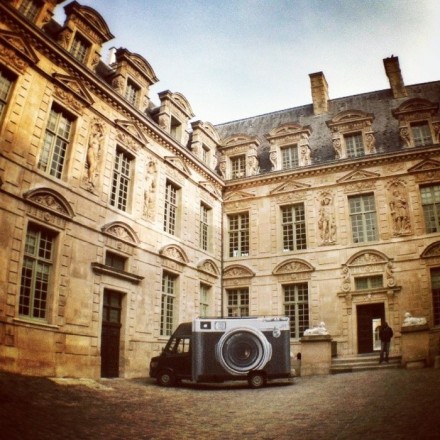 JR’s Photo-booth Truck for Au Panthéon!,  Courtesy of the Artist

In order to gather these portraits, JR sent a photo-booth truck to 8 national monuments in France to photograph participants.  Portraits were collected at The Basilica Cathedral of Saint-Denis, the Counts of Carcassonne, the château of Angers, Carnac alignments, La Rochelle, Palais du Tau, Villa Savoye, and the Pantheon from February 25th to March 29th. The artist also set up a website so that people could upload their portraits from their own computers. The resulting count turned out to be more than enough, and JR narrowed down the pool to pictures that he felt were the most expressive. Beginning installation on Monday, May 12th, Au Panthéon! was completed and officially opened to the public on June 4th.

This is not the first time JR attempted an ambitious project.  In 2007, his Face 2 Face project earned a degree of controversy when he illegally pasted large-scaled portraits of Israelis and Palestinians side-by-side on the wall that divided the two nations. In his 2008 project 28 Millimeters, Women Are Heroes, the artist covered a slum hill in Rio de Janeiro, Brazil with photographic posters of the local women to honor those who have been victimized by violence, rape, and war.  Now Au Panthéon! will mark another step for INSIDE OUT, in which JR will continue to prove the powerful impact the participatory audience has in art, and the important universal unification of individual expression. 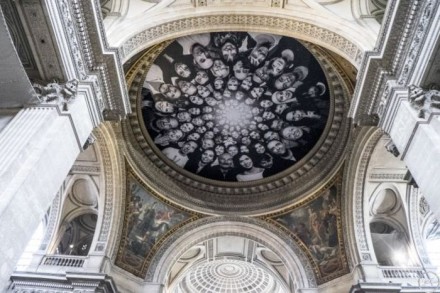 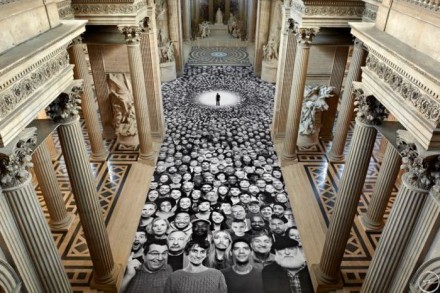 This entry was posted on Sunday, July 13th, 2014 at 12:00 am and is filed under Art News. You can follow any responses to this entry through the RSS 2.0 feed. You can leave a response, or trackback from your own site.