New York – Dan Graham and Günther Vogt: “The Roof Garden Commission” at the Metropolitan Museum of Art Through November 2nd, 2014 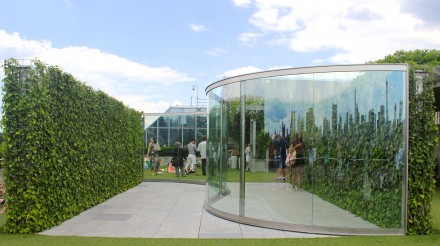 The annual rooftop commission at The Metropolitan Museum of Art always manages to draw a crowd, whether it be Imran Quereshi’s bloody installation last year, or Tomás Saraceno’s vastly popular Cloud City.  For this year’s Rooftop Commission at , the Met has sided with a more heritage artist, Dan Graham, working in conjunction with Swiss landscape architect Günther Vogt to create the work Hedge Two-Way Mirror Walkabout (2014).  Graham, 71, known for his conceptual bent and exploration of multiple mediums, including drawing, painting, sculpture, photography, installation, and performance art, has long focused on how architecture directly impacts its occupants and shapes their experiences of looking, a strikingly perfect fit for the Met’s scenic view and unique location. 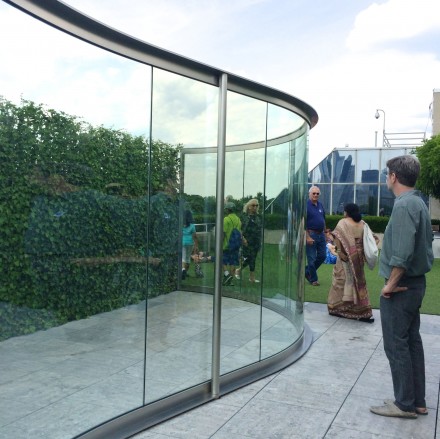 The Walkabout is a curved wall of near-transparent mirror glass, resembling a mathematical sine wave, and is framed by a pair of parallel ivy-hedged walls that connects the structure’s endpoints. It is one of many of Graham’s “pavilions,” the name he gives his signature structures composed of steel, mirrors and glass.  Much like past work, Graham’s piece here is a staid affair.  His  exteriors avoid flamboyance, and Vogt’s framing hedges resemble ordinary hedges in any neighborhood. But as confused visitors edge closer (after taking note of what others are doing), they see the complications that were initially masked the simple facade. 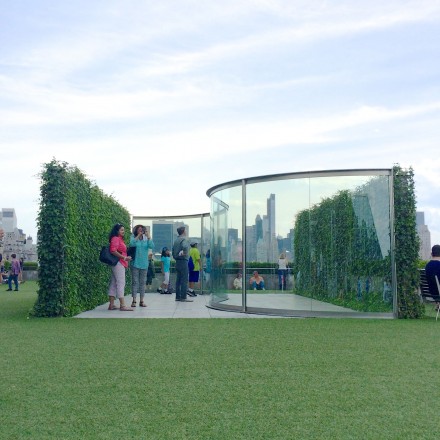 Graham’s pavilions are equally interactive areas as much as they are artworks, and in Hedge Two-Way Mirror Walkabout, the S-shape of the wall forms two pockets, and creates a false sense of privacy, inviting viewers to reflect on their surrounding environment while simultaneously observing other visitors on the other side of the wall.  Depending on where one stands along the glass, the views range in either a spiky panorama of the New York skyline, or a mirror of the Central Park’s green expanse.  “I designed the changing convex and concave pavilion as a funhouse for kids and a photo op for parents,” Graham said in the press-preview. 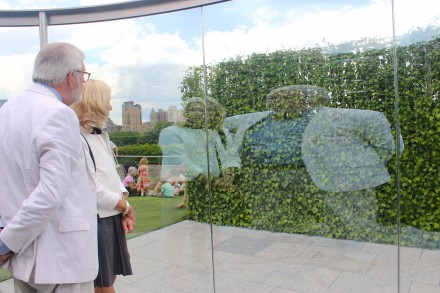 Visitors looking at their reflections in Hedge Two-Way Mirror Walkabout

For the Metropolitan Museum commission, Graham wanted his work to refer back to Central Park, reinforcing the theme in his past works around the overlapping grids of suburb and city, and was particularly attracted to the Met’s border location between Central Park and Manhattan’s urban grid. In between these two arenas, he saw the Metropolitan’s roof as a “leftover space,” and sought to reinvent it to communicate the implications of its location.   The Walkabout’s structure recalls the cool, silver tone of New York City’s buildings and streets, and planted on the spread of artificial grass, the work becomes a microcosm of the greater New York City, reminding viewers that the urbanized city had once spread out of a more natural terrain. The sparse green space in today’s Manhattan undeniably points back to the vastness Central Park, and Graham’s work invites, even forces speculation on the idea of urban development against nature through the multiple encounters that are allowed here. 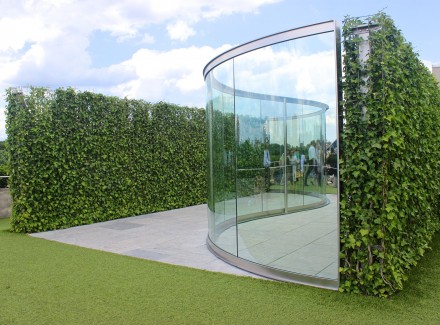 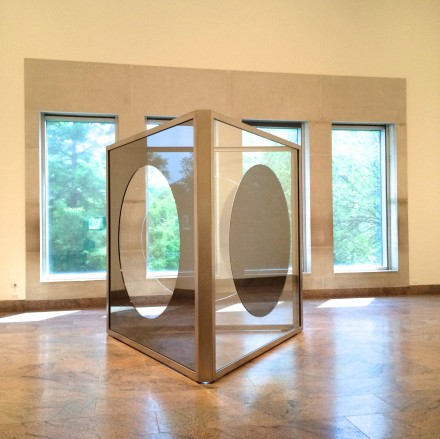 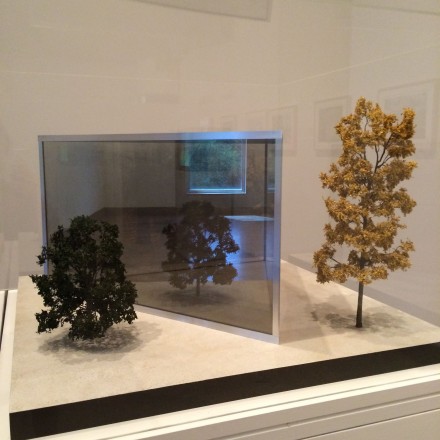 This entry was posted on Wednesday, August 27th, 2014 at 12:00 am and is filed under Art News. You can follow any responses to this entry through the RSS 2.0 feed. You can leave a response, or trackback from your own site.