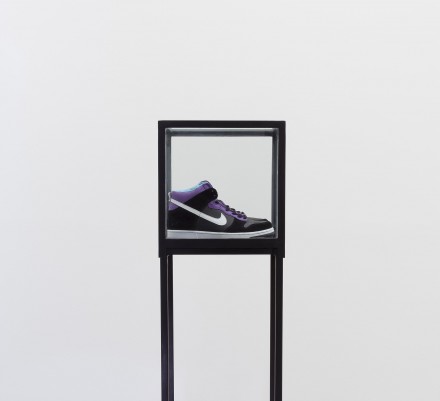 For the past several years, Arizona-born, L.A.-based artist Scott Benzel has been mining the mundane objects of capitalism and its reflection in the cultural agenda through his assemblage and display-based works, challenging the designated meanings of everyday objects as they enter into dialogue with each other. Approaching  simple and mostly utilitarian commodities as reflections of their collective or individualist identities, Benzel decodes dismissed or undiscovered subtleties in contemporary culture, and allows unspoken connections to come to the fore. 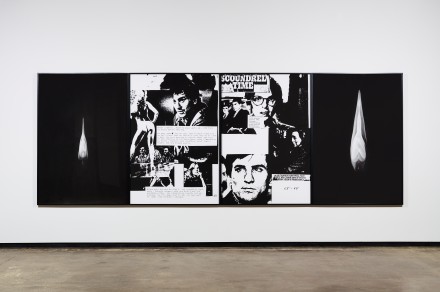 For his first exhibition at Maccarone, Benzel orchestrated a significant mass of objects each depicting a singular narrative while connecting with one another in oblique ways. Greeting the visitors at the entrance is a pair of never-mass-produced Nike “Heaven’s Gate” sneakers, Counterfeit Nike ‘Heaven’s Gate’ SB Dunks, presented in a glass and steel container. Idolized as a pair of desire objects that are impossible to attain, the sneakers stand as a symbol of social status despite their failure to enter mainstream manufacture.  At the same time, the work makes express reference to the death of the Heaven’s Gate cult, and the horrific subject matter of their group suicide entering into cultural exchange again as a pair of sneakers.  Similar to a pair of sneakers, an unrealized film, The Story, portrays the dilemma between the failure and the victory, suggesting the thin separation of the real and the fictitious through a set of storyboards from the unrealized film. 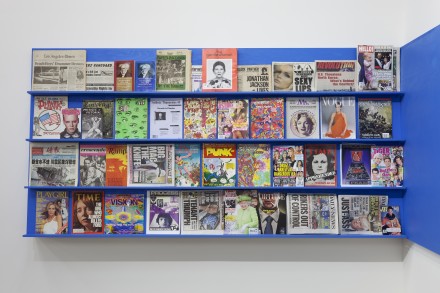 The artist also investigates the media and its depiction of cultural phenomenons through appropriating posters of some films, such as the notorious, The Trip, recognized for its bold depiction of drug use, presented here with its original censorship stickers covering the film’s LSD referencing motto ‘A Lovely Sort of Death’, or the Polish poster of 1984’s Hollywood romantic comedy Romancing the Stone, promoting the film rather as a psychological thriller through a strikingly gruesome graphic design. 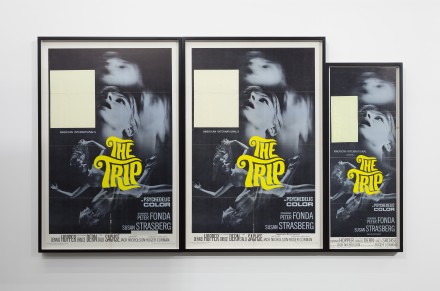 Nearby, a duo of black and white photographs, Lady Diana “Fakir” image and Spock “Slash” image, present two icons of the popular media, Lady Diana and Captain Spock, photoshopped to anonymous nude bodies, contributing to Benzel’s argument on the depiction of the real and the feigned. Elsewhere, the artist gathers a large group of printed materials, placed on two long shelves displaying an absurdly irrelevant selection of books, magazines and newspapers, among which are Time Magazine and a few tabloid magazines, commenting on the relativity of the high and low cultures through blending them in the dynamics of everyday life.  Adjacent to these works are Jean Genet’s Querelle, Hunter S. Thompson’s Hell’s Angels, and works by Thomas Pynchon, bringing a classic opposition of mindsets and identities from the same time frame together. 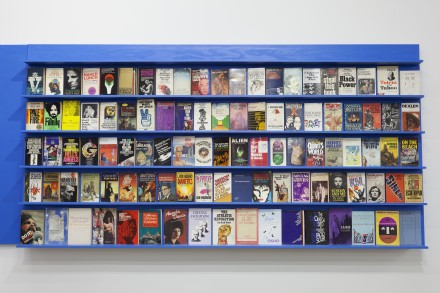 The definition of core value and its fluidity finds its most versatile form in Spectrum, a multimedia installation combining sound, technology and physics to orchestrate an unlikely symphony. Two pocket size vibrators, placed inside a baby grand piano, make the piano’s tonic cords create a high pitch noise reinforced by a microphone, while the connected speakers stimulate the microphones hanging from the ceiling, causing them to swing back and forth. The result is an impressive spectacle of visual and audio stimulation for the viewers, similar to a Rube Goldberg machine, ridiculing the set notions attached to commodities inside the frame of utilitarianism.

Scott Benzel is on view at Maccarone Through August , 2014. 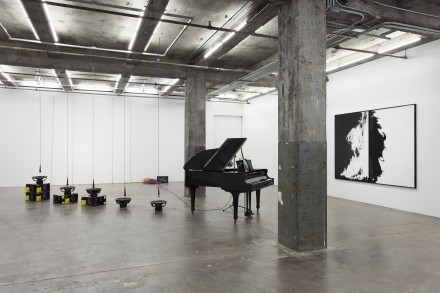 This entry was posted on Wednesday, August 6th, 2014 at 12:00 am and is filed under AO On Site. You can follow any responses to this entry through the RSS 2.0 feed. You can leave a response, or trackback from your own site.