Jessica Morgan to Take Over Directorship at Dia Foundation 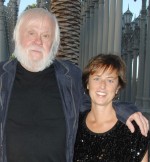 Dia Art Foundation has announced Jessica Morgan (curator of international art at London’s Tate Modern) will take over for Philippe Vergne as director of the New York arts organization.  Morgan has a challenging road ahead of her, including stalled plans for Dia to build a new museum for its collection between Chelsea and the Meatpacking District, and will seek to negotiate the demands of such a space with the foundation’s longstanding commitment to living artists.  “It has to be a relationship that’s relevant to the current moment,” she says. “It can’t rest on a notion of its past.”Read more at Artnet

This entry was posted on Thursday, September 11th, 2014 at 1:04 pm and is filed under Art News. You can follow any responses to this entry through the RSS 2.0 feed. You can leave a response, or trackback from your own site.