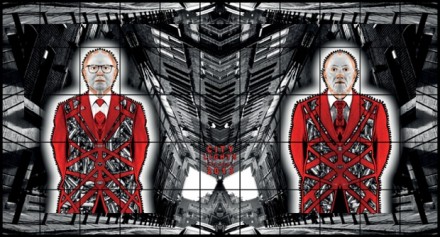 Now in their early seventies, the artist duo Gilbert & George have built a trademark artistic presence through their eccentric personas, often mocking British conservatism and aristocratic stereotypes. The duo’s artistic and romantic partnership has produced an ambitious body of work over the past 40-plus years, taking their home in London’s East End, with its multi-cultural and occasionally chaotic atmosphere as a home and inspiration for their politically and socially engaged practice.  Extending this practice, White Cube’s Bermondsey gallery is presenting an exhibition of the duo’s recent large-scale photomontages, collaging London streets with images of the dup.  Scapegoating Pictures for London, containing over sixty pieces of predominantly black, red and white works, delivers the duo’s profoundly satirical and often provocative tone, triggering concerns over terrorism, globalism, surveillance and religion in a massive and ever-shifting urban landscape. 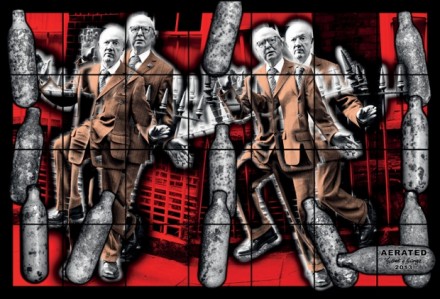 If there exists one driving concept throughout much of their career, Gilbert & George’s strongly anti-religion and anti-elitist stance takes a prominent foreground, so much so that they consider themselves living sculptures, infused into the course of daily life, redefining art as a mean for everyone while challenging hierarchical structures. Their “Art for All” motto contributes to viewpoint, strengthening the highly political art-making they practice.  The exhibition at White Cube is no exception, and various depictions of Gilbert and George, repeated in full or cropped body parts, are matched with striking scenes culled from contemporary London.  A prime symbol of European aristocracy, with its rapidly changing cultural makeup, signifies a perfect point of convergence, where hundreds of different immigrant groups have settled, building a diverse and occasionally challenging terrain. 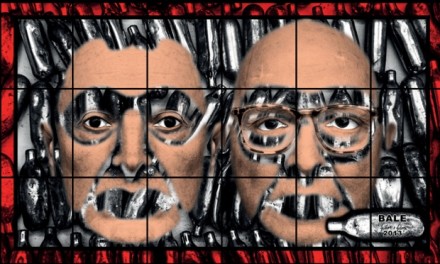 The most notable  symbol of the city’s chaotic nature throughout the exhibition is the continuously repeating canister of nitrous oxide, a drug inhaled to create temporary sensations of joy and relaxation.  Commonly found on the streets of London, these cans, reflect the constantly transforming subcultures of the city the duo has been living in since they met. Elsewhere, Muslim women in niqabs are merged with images of Gilbert and George in their signature suits, while in others their heads are placed inside the hoodies worn by anonymous city dwellers, next to skeletons that also adopt the duo’s faces and shoes as theirs. 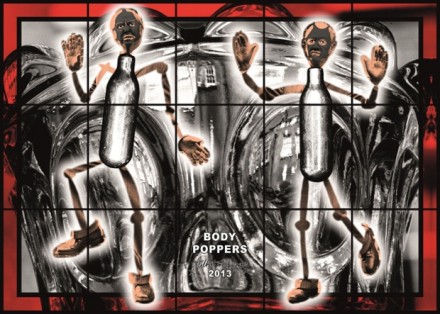 As humorous and witty as they are, Gilbert and George do not hesitate to editorialize here. The structural decay they witness in their city and around the globe caused by feuds over power, fundamentalism, pollution and crime resolve in these montages through plays on gruesomeness and absurdity. Red, black and white are repeat throughout, and the pieces occasionally recall propaganda posters seen around city streets to declare and impose opinions.  Equally, it’s an interesting point to note the artist’s slowly but surely alienating their own from their works, slowly chipping away at the consistency of their own form as they move further away from the landscape of a new London.

Gilbert & George: Scapegoating Pictures for London is on view at White Cube through September 28, 2014. 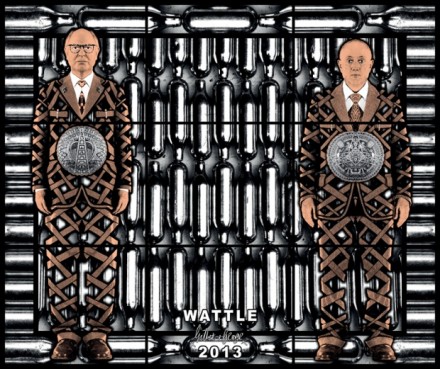 This entry was posted on Sunday, September 7th, 2014 at 12:00 am and is filed under Art News. You can follow any responses to this entry through the RSS 2.0 feed. You can leave a response, or trackback from your own site.