Artists Design Their Own Ads in New York Times 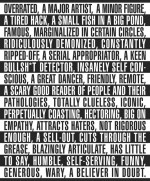 In a special feature, The New York Times has invited 15 artists to create imaginative advertisements for themselves as they might run in the newspaper, with submissions from Jenny Holzer, Carol Bove, and Francesco Vezzoli, whose particularly bizarre ad offers a body double of himself as a sexual partner.  ‘‘I immediately felt that it would be hilarious to see a real/fake prostitute ad in the pages of the most respected newspaper in the world,” the artist writes.

This entry was posted on Monday, October 20th, 2014 at 4:53 pm and is filed under Art News. You can follow any responses to this entry through the RSS 2.0 feed. You can leave a response, or trackback from your own site.