Boldly distorting otherwise rigid phenomena, Pierre Huyghe has ambitiously orchestrated and staged alternative recreations of the daily and the mundane. For his current show at Hauser & Wirth’s London location, the Paris-born artist is covering the gallery space with his unfamiliar narratives, which emerge from more familiar territory. IN. BORDER. DEEP. invites the viewers into a hub of various experiments and observations, merging various mediums with science and art history itself. 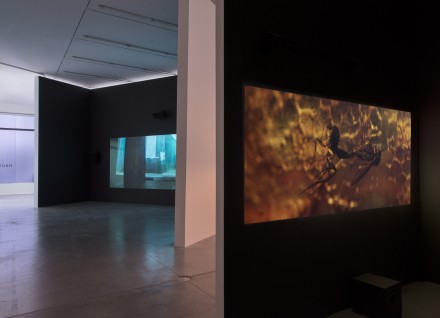 The Hugo Boss Prize winner has always been keen on blurring the already complicated borders of the real and the ephemeral, as much as building pristine modes of perceptions towards the engrained, and he is provided ample space here to continue his project.  On view in the exhibition is Human Mask, a nineteen minute video depicting the eerie story of a monkey after the Fukujima disaster in Japan. Trained to serve as a waitress in a restaurant, the monkey in the video is wandering around the ruins of the restaurant after the disaster hit the city, wearing a human faced mask and a dress. Due to the difficulty in comprehending the actual identity of what sits behind the mask at first glance, the viewers catch glimpses of familiar gestures and the human attire, perpetuating the notion of a living creature in an eerily serene scenario. The thin line between survival and disappearance collapses with the disturbing absurdity of the told plot, while relocating the origin of man into the frame as the lone survivor. 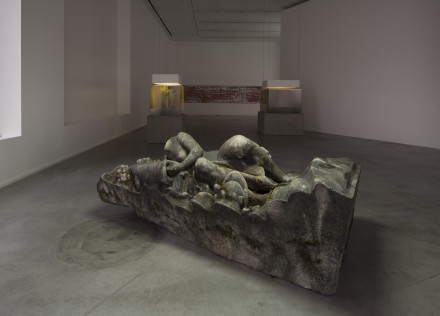 Made out of concrete cast for an exhibition in 1931, La Déraison is a reclining sculptural figure of a woman still sporting sets of pearl necklaces on her headless neck. An unfamiliar warmth stems from the mold covered body, irritating conventions of visibility. Through a heating mechanism placed inside, this sculpture of a woman imitates the average heat of a human body, making the growth of moss possible. Touching the sculpture is encouraged, and viewers are encouraged to take part in a foreign intercourse with an inanimate source of familiar, living energy. 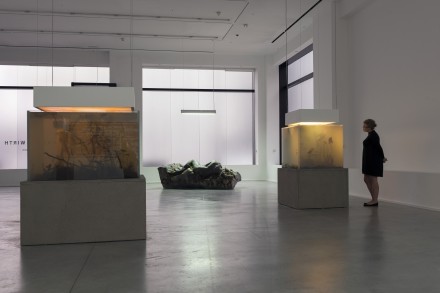 The recurrence of the time, and the transformation of a timeless artistic mind are embodied in three aquariums placed around the gallery, containing plants brought from Monet’s pond in Giverny where he painted his Nymphéas series. The tone of the glass windows change between matte and transparent based on the recorded climate changes in Giverny between 1914 and 1918 when Monet made his series of water lilies, providing a strong comment on the representation of art history, embodying the scientific and materialistic existence of art making.  Huyghe rebuilds such iconic phenomena available inside the gallery space, thrilling the viewers with a sudden marrying of the past and the present. 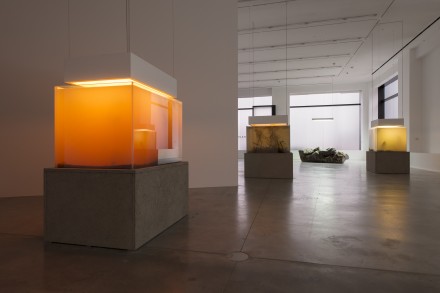 Combining the historical, surreal and perceptually challenging, Pierre Huyghe: IN. BORDER. DEEP. is on view at Hauser & Wirth through November 1, 2014.

This entry was posted on Thursday, October 30th, 2014 at 12:00 am and is filed under Art News. You can follow any responses to this entry through the RSS 2.0 feed. You can leave a response, or trackback from your own site.