New York – Jean Dubuffet: “Soul of the Underground” at MOMA Through April 5th, 2015 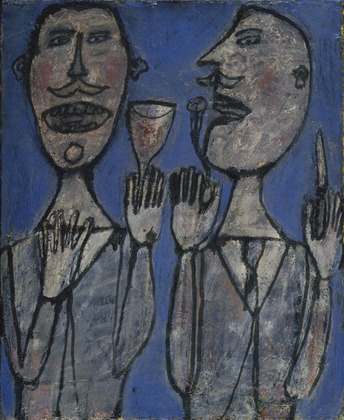 Jean Dubuffet, Snack for Two, (1945) via Museum of Modern Art

Currently on view at New York’s Museum of Modern Art is a retrospective focused on the work of French artist and sculptor Jean Dubuffet. Bringing together the museum’s unmatched collection of paintings, sculptures, drawings, prints, and illustrated books from Dubuffet’s prolific output, the exhibition focuses predominantly on the key years of his career: from the 1940’s to mid-1960’s. 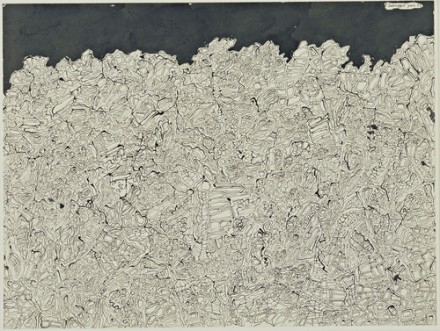 Born in 1901 in Le Havre to family of wealthy wine merchants, Dubuffet’s art was marked by a desire to rebel against contemporary notions of class, beauty and standards of good taste. His art set itself apart for its abstract constructions and disregard for conservative figurative portrayals. His search for Art Brut, a term he coined in 1945 referring to an art that was outside the fine art tradition, led him initially to be inspired by the drawings he saw done by mentally ill patients that he saw in Switzerland. He later incorporated art done by children and self-taught artists into the genre, and into his own aesthetic approach. The movement was further elaborated by Dubuffet in a series of texts that were published in the journal of L’Art Brut and Asphyxiante Culture (1968). His ideal was to create an art whereby the artist was devoid of all cultural and social influences, as well as art schooling. The resulting creations were thus pure and not inspired by any art traditions. Art, he believed, needed to the result of an individual’s independent vision and own personal resources. 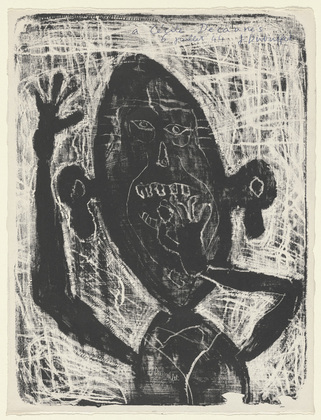 Displayed throughout the exhibition are the child-like renderings that Dubuffet is known for and which reflect on his idea of Art Brut. The works furthermore shed light on the artist’s radical experimentation with material and form during a pivotal time in twentieth century art history. Creating work which often appeared primitive and childlike, Dubuffet mixed sand, gravel and other materials, including dirt, fruit peels, leaves as well as other organic material into his pigments, which he applied as layers with palette knives and brushes onto his canvases. The resulting images were laden with a thick impasto, created from scraping and scratching with the handle of his paintbrush. Aware of the importance he placed on material, Dubuffet once wrote, “Art must be born from the material and from the tool, and must preserve the trace of the tool or the tool’s battle with the material.” 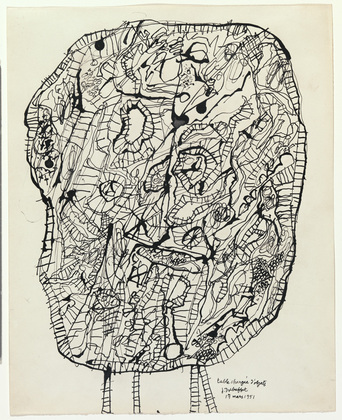 Dubuffet also revolutionized lithography by experimenting with different textures. For example, he would attach lithographic stones to rags, sandpaper and various chemicals in order to create prints incorporating a variety of forms and textures. In addition, his drawings in ink or gouache would often replicate acts of combination and re-combination – akin to the process of collage. The resulting surfaces would reveal decaying shapes, abstract renderings of reality and intriguing organisms. 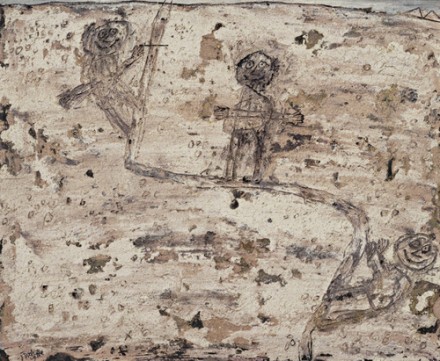 Highlighted works of the exhibition include the monumental lithographic project the Phenomenaseries (1958–62), which portrays the artist’s fascination with surfaces of the earth and natural forces. The work, which was created between 1958 and 1962, reveals around 300 abstract prints that portray surfaces similar to those of rock formations and water. The series was made using materials as diverse as salt, orange peel and sugar and became a base for future works the artist did across a variety of mediums. 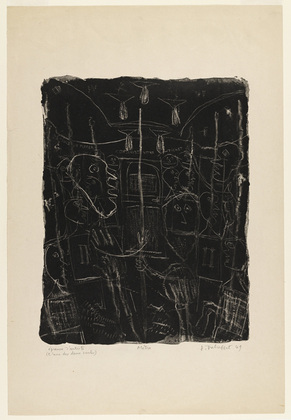 The works in the show particularly emphasize flattened perspectives and aerial views, much in the manner of how a child would draw a landscape. But while rebelling against conventional artistic methods, the show, which was organized by Jodi Hauptman, Senior Curator, and Sarah Suzuki, Associate Curator, Department of Drawings and Prints, also points to sentiments relevant among many artists just after World War II. Dubuffet, along with his contemporaries, were faced with how to create in the face of mass destruction. Perhaps his reconstructing of materials and rejection of the traditional fine art tradition was his way of coming to terms with the wreckage of the European landscape, his expression and attempts at starting anew.

The exhibition runs through April 15th 2015.

This entry was posted on Tuesday, January 6th, 2015 at 12:00 am and is filed under Art News. You can follow any responses to this entry through the RSS 2.0 feed. You can leave a response, or trackback from your own site.