Hauser & Wirth‘s London space is currently presenting Smile, a new body of work by the New York-based artist Rashid Johnson. Known for his hybrid creations blending photography, sculpture and painting, Johnson had his breakthrough with the Thelma Golden-curated Freestyle show at The Studio Museum in Harlem in 2001. Johnson’s star has been on the rise since, the subject of solo shows in prestigious institutions such as Sculpture Center in New York, and the Museum of Contemporary Art Chicago.

His current show at Hauser Wirth London, where Johnson is showing for the first time, continues  the 2011 Hugo Boss Prize finalist’s central themes, while finding its inspiration in the titular photograph by Elliot Erwitt. Portraying an African-American boy with a big smile on his face and a gun that he is holding at his temple, this intense black and white photograph covers the walls of the exhibition space, while a large steel structure, serving as a base for various objects from house plants to brass objects, is positioned in the middle.  Of these objects located on the grid-shaped structure, entitled Fatherhood, is also a series of books, including Bill Cosby’s memoir of the same name.  Drawing a notable potency due to the controversy around Cosby’s recent sexual assault allegations, this memoir represents Johnson’s long time interest in the comedian as a patriarchal figure and a symbol of American middle-class values.

Additionally, shea butter, a material that Johnson has previously employed for his works, serves here as the main ingredient to various busts that are also positioned on this steel structure. Elements that encompass the nature of African diaspora and the African-American experience abound in Johnson’s intricately constituted composition, narrating an expansive history through entities that seem purposely mundane and silent.

Johnson’s ability to attribute further content to otherwise mute materials has helped him become one of the key figures of the ‘post-black art movement’, and this exhibition at Hauser & Wirth emphasizes the artist’s interest in his core materials, among which bronze is the most common.  Aside from assemblies of mixed objects, bronze panels hung onto the walls contrast the image of the boy holding a gun with their abstract gestures.  Black soap, another material Johnson constantly returns to, appears on these panels, constituting what Johnson calls a “memorialization” of the creative process. 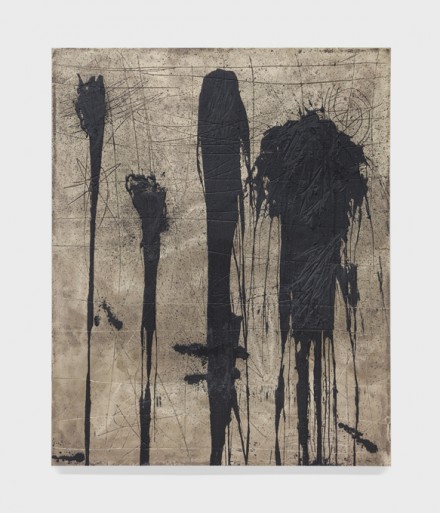 This entry was posted on Thursday, March 5th, 2015 at 1:43 pm and is filed under Art News, Featured Post, Show. You can follow any responses to this entry through the RSS 2.0 feed. You can leave a response, or trackback from your own site.