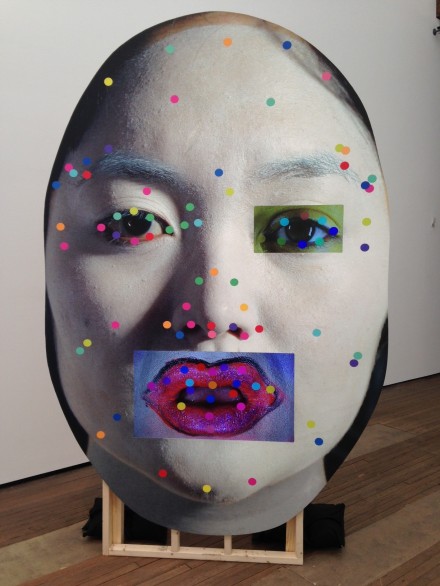 Tony Oursler, EUC (2015), All images are by Osman Can Yerebakan for Art Observed.

The new body of work by acclaimed new media artist Tony Oursler is currently on view at Lehmann Maupin’s Chrystie street location. Aligned with his signature style of analyzing high technology and its idiosyncratic tone in correlation to the human body, Oursler delves into the limits of human expression in his new exhibition.  Although he was born in New York City, Oursler emerged in late 1970s along with a group of West Coast artists such as Mike Kelley and Jim Shaw after graduating from the California Institute of the Arts, where he studied under John Baldessari. 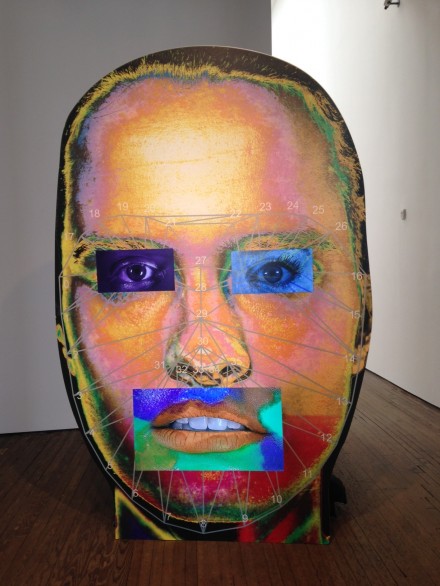 Oursler’s work places harmony at its core, connecting various media and sculptural practices to allow each medium its core essence, both in its own right and in its relation to its corresponding elements in the work. Traditional branches such as sculpture, painting and printmaking correspond with technology-driven elements, primarily video and sound. The physicality of human body and soul initiate tight dialogues with technologically enhanced devices, bearing chaotic, yet coherent landscapes.  Most famously, his footages of human faces reflected on various surfaces, from cloth to fiberglass, complicate built networks between the real and the artificial, while weighing on the vigorous nature of artistic invention. 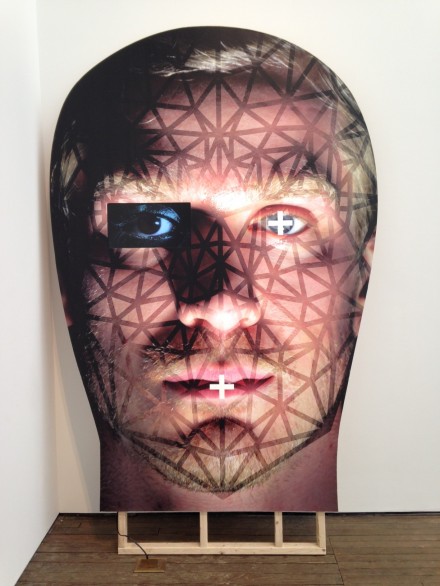 Oursler here parallels the exposed state of the human face and its limits in terms of self expression, against the expansive capacities of machine-generated tools, building mixed media artifacts that echo the human visage in their technological modes of understanding and reproduction.  Each work presents human faces in assorted shapes and sizes, mask-like panels that vary in their color and pattern juxtapositions.  Appropriately positioned TV screens stream recorded footage of mouths and eyes, furnishing those otherwise empty, lifeless parts of these surfaces with a sense of simulated life.

Geometric formations bearing analytical outlines of commonly used facial recognition systems underscore these multimedia structures, situating the tactile reality of human existence in conversation with its own artificial counterpart, and its mode of understanding in a digital economy of the human body.  The introduction of carnality, albeit through recorded footage, leaves imprints of man’s hand, often intruding into the otherwise highly mechanical formations of facial recognition mappings.  Here, Oursler allows the techniques of his previous work to inform a series of works seeking to move away from the human and towards the purely mechanical.  Even so, the negotiation between the two forces an understanding of both perspectives, computer and human, and how those two look back in on each other’s modes of aesthetic and structural machinations.

Tony Oursler is on view at Lehmann Maupin through June 14, 2015. 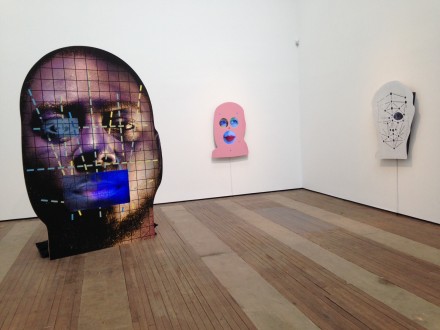 This entry was posted on Thursday, June 11th, 2015 at 12:00 am and is filed under Art News, Featured Post, Show. You can follow any responses to this entry through the RSS 2.0 feed. You can leave a response, or trackback from your own site.