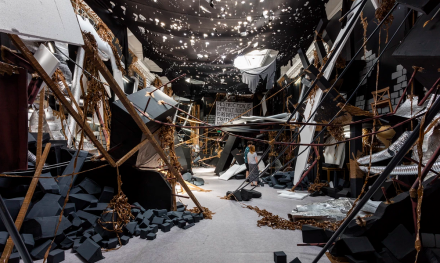 Thomas Hirschhorn has returned to London for his first solo show in the British capital is some time, bringing a new, site-specific work that continues the artist’s interest in crisis, temporality and mediation as necessary components in the understanding and mitigation of trauma.  Borrowing from the aesthetic languages of installation and sculpture, the artist maps a fictitious moment of violence across the South London Gallery, bringing with it a state of suspended aftermath.

The artist has practiced massive, violent overturns of institutional space frequently in the past five years, perhaps most notably in his recreation of the Concordia crash at Gladstone Gallery several years prior, as well as his massive, blown out wall at last year’s Manifesta in St. Petersburg.  In each, the notions of violence, of total destruction are used as an initial condition to examine the moments after a violent intrusion, whether it be a political or terrorist attack, an act of war, or an unexpected catastrophe.  Composed from studies of bomb sites and explosions around the globe, In-Between turns the interior of the gallery into a swirling maze of detritus.  Gaping holes are punched in the ceiling, with light streaming through, while nearby, ropes and cords drape down across rubble and rebar. 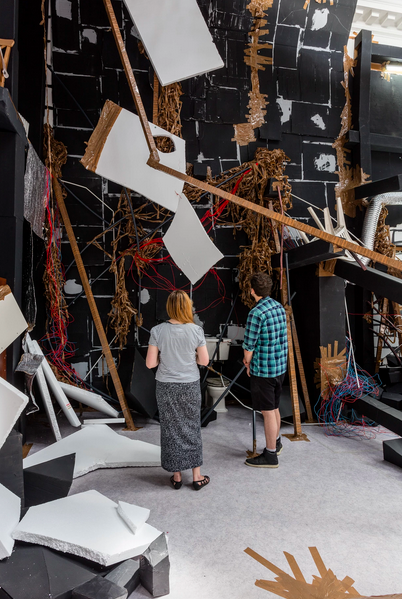 It’s difficult to measure Hirschhorn’s full intent with the exhibition, however, particularly given occasional moments in his work here that feel quite deliberately staged, or the presence of quite clean, spotless materials (some are obviously fake).  These pieces and situations bring a marked surrealism to the work, suspending it somewhere between meticulously placed structure and chaotic collapse.  This withdrawal from the event itself becomes the exhibition’s masterstroke, a choice that keeps the work from pushing full-bore into the horror of destruction, and instead leaves the viewer to ponder the aesthetic and political space between real and fictitious, whole and part, violence and peace.  After all, the gallery, for all its clutter and confusion, still remains the same, day after day, until the exhibition closes. 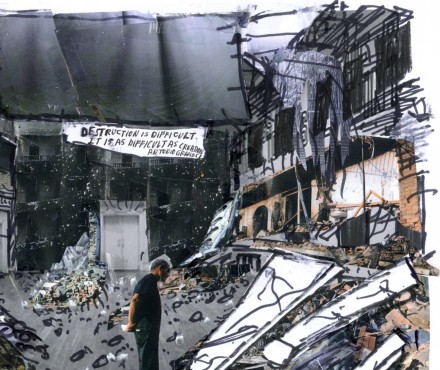 It’s perhaps this note that sounds so strongly in Hirschhorn’s work here, the idea that the placement of this structure, one meant to stand in for the destruction of another, can be a generative force in and of itself.  At the end of the day, Hirschhorn seems to understand, that force can serve either as the impulse to rebuild an institution, or to leave it in rubble.

This entry was posted on Friday, July 31st, 2015 at 12:00 am and is filed under Art News, Featured Post, Show. You can follow any responses to this entry through the RSS 2.0 feed. You can leave a response, or trackback from your own site.