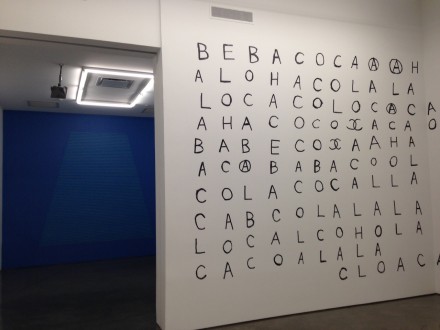 The influx of summer group shows have already begun in New York this year, as galleries presenting diverting and compelling themes take the slow summer months to explore connecting themes among their roster of artists and the broader art world.  Gladstone Gallery’s Hello Walls is one of the most intriguing of these early group exhibitions, placing an emphasis on the wall as a means for contextual experiment and repositioned working structures. 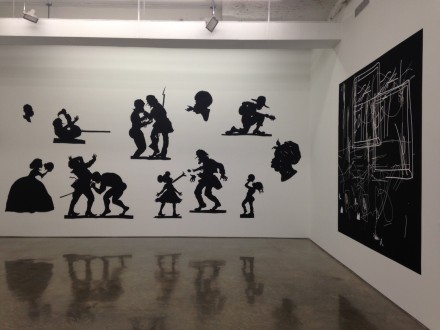 With its long legacy in art history, from pre-historic cave carvings to Modernist murals, walls have served as a varying creative territory for artists, beyond its obvious role as an architectural anchors.  Covering an expansive timeline that dates back to the ‘60’s Conceptualists, this show sheds a light on multiple ways in which walls have been appropriated by artists in various decades and genres. The ambitious checklist includes pioneers such as Mel Bochner, Lawrence Weiner or Sol LeWitt, yet cements its argument with contemporary stars such as Kara Walker, Douglas Gordon and Wangechi Mutu. 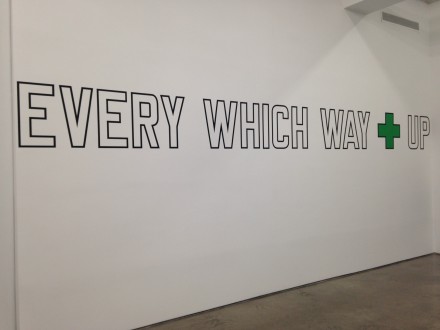 Walls, commonly regarded as symbols of solitude and isolation, are prompted here through the Willie Nelson song Hello Walls, that opens the show’s press release.  Their all-encompassing boundaries are employed here for various statements and experiments throughout the show, occupying both Chelsea locations of the gallery.  Text, one of the most common forms in wall-based artworks, here appears in hands of arguably the most influential living text-based artist Lawrence Weiner, whose vaguely expressive Every Which Way + Up composition contrasts with other fixtures such as Karl Holmqvist and Ricci Albenda, who both deliver more abstract letter formations.  The most expressive text composition comes from Mel Bochner, however, covering one of the walls at the main gallery with the text “Forgetting Is The Only Continuum” in a bold font. 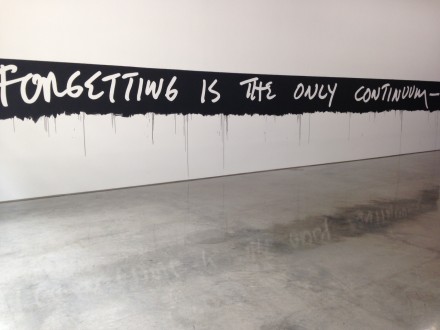 Figuration, on the other hand. emerges through works of Kara Walker, Wangechi Mutu, Raymond Pettibon and Michael Craig-Martin, each valuing the freedom the wall suggests as a lager-than-life surface, unopposed by the limits of a canvas or paper sheet.  Detailed narratives spread throughout white expanses, and invite viewers’ close inspection to capture certain figurative and descriptive details. 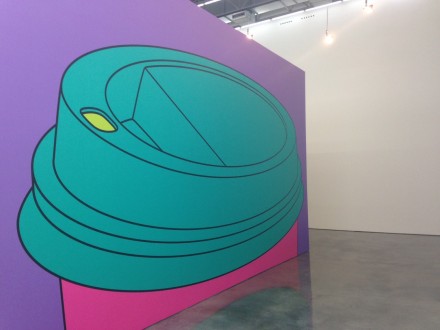 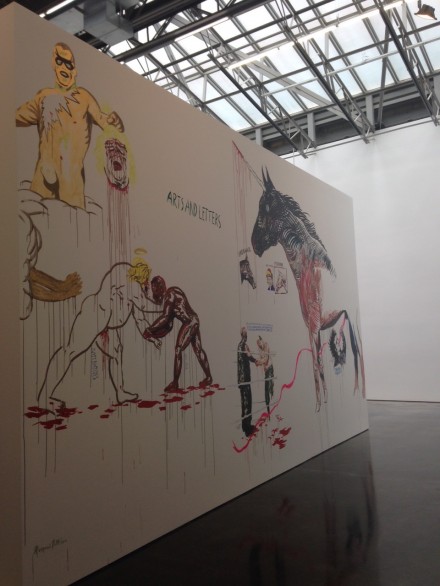 Walker’s signature cut-out composition, by comparison, turns her wall into to a theatrical stage, while Pettibon’s narratively loose tale repurposes the wall as a geographical landscape, building his subliminal and arcane tale on against an otherwise blank surface. Abstraction, especially geometrical precision, is another field explored here, with Ugo Rondinone’s immense sun-like sphere, Angela Bulloch’s densely pixellated painting, by contrast, or Sol LeWitt’s grasping juxtaposition in comforting tones of blue, offer hallucinatory journeys that can only be experienced on such grand scales.

Hello Walls is currently on view at Gladstone Gallery through July 31, 2015. 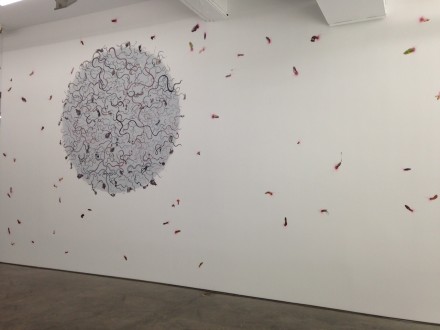 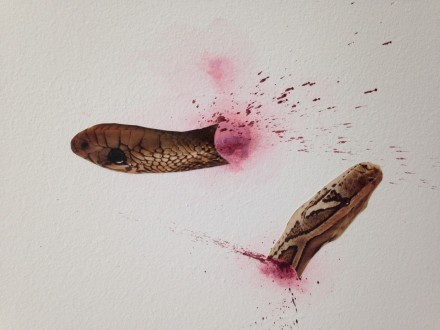 This entry was posted on Monday, July 13th, 2015 at 12:00 am and is filed under Art News, Featured Post, Show. You can follow any responses to this entry through the RSS 2.0 feed. You can leave a response, or trackback from your own site.