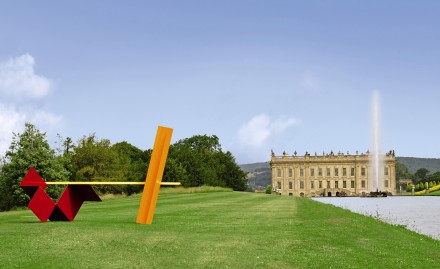 Curated by Royal Academy Artistic Director Tim Marlow, Sotheby’s  tenth edition of its outdoor sculpture exhibition at Chatsworth House in Derbyshire, titled Beyond Limits, swings for the fences with its studious and somewhat understated take on the impact and influence of Britain’s sculptural greats over the past 65 years.  Tracing lines of exchange and dialogue from the formal innovations of the 1950’s and 60’s through the irreverent inversions of the YBA’s during the 1990’s and on to the present, the exhibition is an intriguing examination on Britain’s own sense of the art historical as much as it is a review of its products. 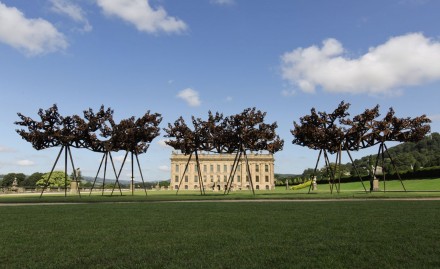 Conrad Shawcross, The Dappled Light of the Sun I, II and III (2015), via Sotheby’s

The focus on the art historical is a strong choice for the grounds of The Chatsworth, emphasizing Britain’s ties to antiquity, or its work’s apparent dissonance with the stately grounds and Baroque appointments.  In one scene, Anthony Caro’s colorful, jutting elements for Sunshine play off against the hard lines and converging planes of the landscape and reflecting pool.  In another, Conrad Shawcross’s The Dappled Light of the Sun series complements the palace grounds and the surrounding forest.  The most recent of the works selected for the exhibition, the piece also seems to hold one of the stronger ties to the Chatsworth’s layout, as if a reflection of history had returned to the foreground of the nation’s artists.  Similarly, a powerful tie is drawn by Antony Gormley’s Big Gauge, sitting in a secluded walkway of hedges, figurative sculptures and erode brickwork that feels like a precise synthesis of the artist’s interests in scale, deconstruction and historical traditions as translated through modernity. 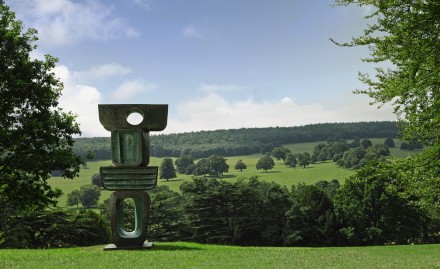 Equally striking is Barbara Hepworth’s daunting Three Obliques, which sits aside a small pond, and plays on the spatial repose of its surroundings.  Staid and calm despite its towering form and rough surfaces, the piece  seems to spring forth from the earth, a natural formation of the British landscape that perfectly emphasize the history and natural interests that dominated much of early post-war British practice. Hepworth is an immediate star of this exhibition, with a number of  her unique forms springing up across the grounds.  The Family of Man, for instance, looks out over a rolling field of trees, underscoring natural space and  archaic formal linguistics to tie deep reflections on British history back to the present day.

Offering a compelling and deeply considered reflection on British sculpture, Beyond Limits is a strong opportunity for British viewers to enjoy the gentle lines of the countryside in conversation with the artworks that so often draw inspiration from it. 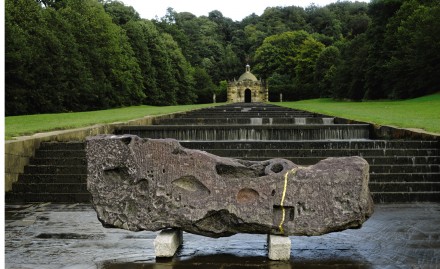 Stephen Cox, Dreadnought: Problems of History – The search for the Hidden Stone (1990-2015), via Sotheby’s 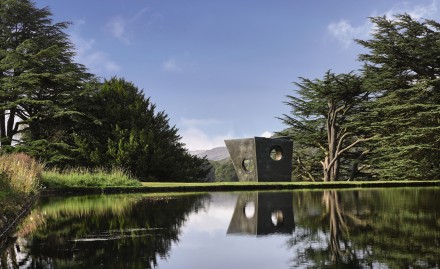 This entry was posted on Sunday, September 27th, 2015 at 12:00 am and is filed under Art News, Featured Post, Show. You can follow any responses to this entry through the RSS 2.0 feed. You can leave a response, or trackback from your own site.