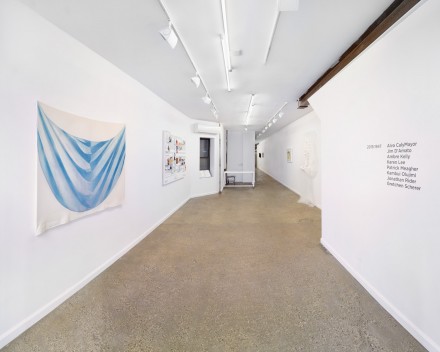 Founded in 1947 by a group of over 160 prominent American artists, among them Thomas Hart Benton, Philip Guston, Edward Hopper, Louise Nevelson and Jacob Lawrence, Artists Equity was formed to advocate for artists’ rights and provide collective resources for economic, legal and health benefits. Following WWII and the end of the WPA Federal Art Projects, amid a political climate growing more conservative and reactionary, artist Yasuo Kuniyoshi began to discuss with other American artists, primarily in New York and Woodstock, the idea of a collective advocacy organization.

Kuniyoshi wanted to establish an organization that set no aesthetic or ideological standard, but rather focused on economic issues pertinent to artists, such as health insurance, copyright and royalties, as well as emergency welfare funds. The initial board included five women and a number of black, Hispanic and Asian American artists, founding an organization that worked as a support system for artists facing discrimination.  Throughout the years, notable members have included Alex Katz, Sol Lewitt, and Alice Neel. Started as a national organization, the New York chapter, always the largest and most influential, split off on its own in 1965. 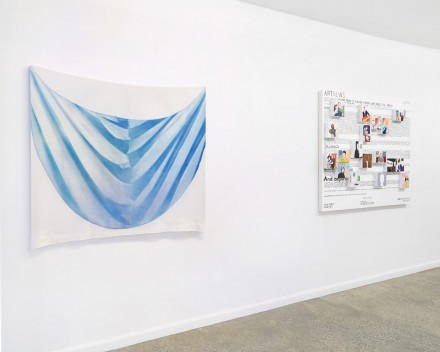 In 1991, New York Artists Equity Association opened a gallery on Broome Street in SoHo, which operated until 2011. The gallery served to connect artists with dealers, collectors and the public, providing a discussion space as well. This space, Equity Gallery, has found a new home, opening once again on Broome Street, although this time in the Lower East Side. For its inaugural exhibition, 2015:1947, Artists Equity asked eight artists to present work inspired by or corresponding to the work of a founding artist. 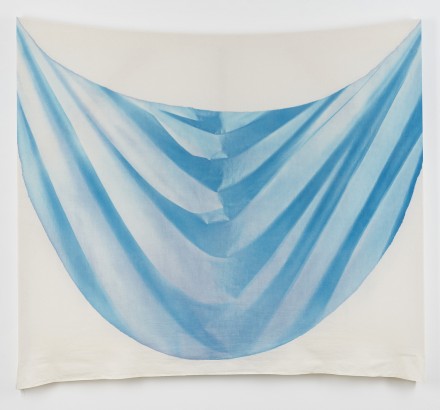 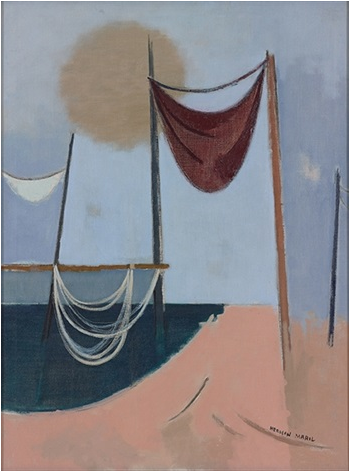 Karen Lee’s Drawn On is a tromp l’oeil cyanotype drape on draped muslin. Lee chose a particular painting, Herman Maril’s Form and Flow (1958), a spare and almost abstract somber seascape with draped rope and fabric, as her inspiration. Somewhat of an outlier regarding Maril’s work, Lee was drawn to this painting because it “seemed like it could be a blueprint for [her own work] to a continually canny degree.” 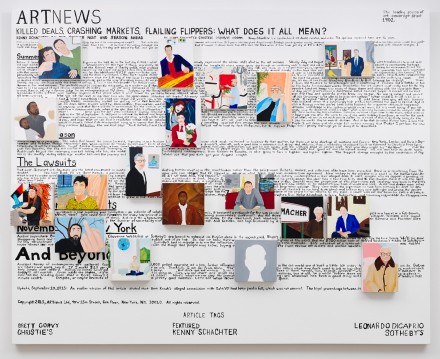 Next to Lee’s piece is Ambre Kelly’s What Does It All Mean? Flippers, Markets and Deals, a cartoonish rendering of a page out of ARTnews, dotted with portraits of art market players (and Leonardo DiCaprio). Kelly found her work resonated with the portraiture of Lily Harmon, who painted friends, relatives and acquaintances in the art world, with her body of work coming to be a representation of a certain social milieu of the time. 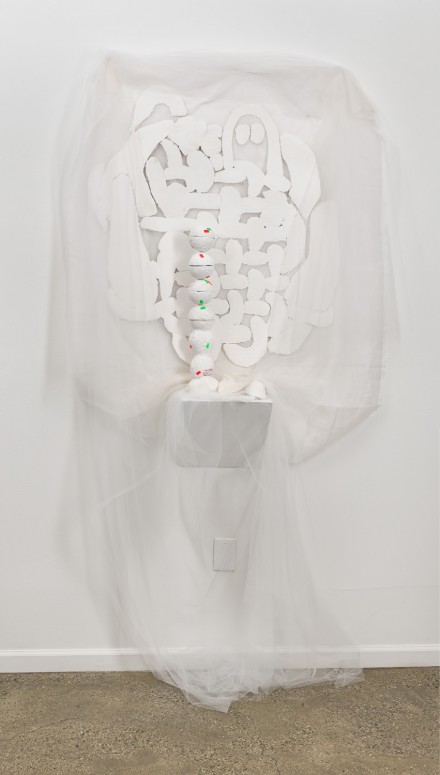 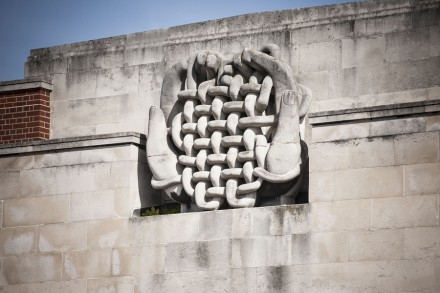 Alva CalyMayor’s whimsical Man-Made Fibers is a sculpture made from paper pulp and tulle, delicate and ethereal with a few comical punctuations like fluorescent orange price tags. It is directly inspired by two of Mitzi Solomon Cunliffe’s works, her design for the BAFTA award and a stone relief from which CalyMayor took the name, Man-Made Fibres. 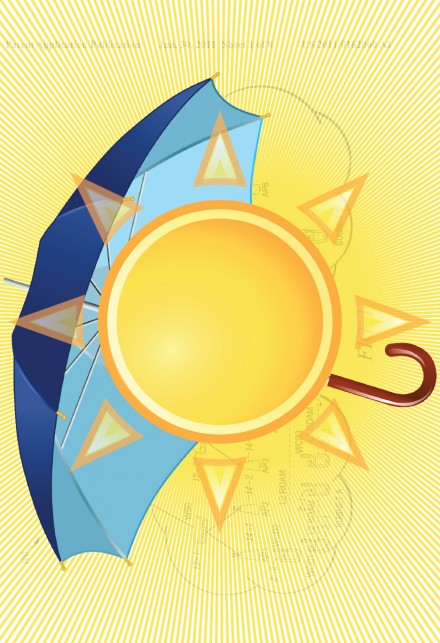 A colorful counterpoint to Man-Made Fibers is Patrick Meagher’s Whether Weather, an inkjet print of a bright sun overlaid on top of an umbrella (both taken from weather forecast icons) and a diagram of a cellular network. The corresponding work is a still life by Kuniyoshi, which depicts a small shovel and shells in a strange, floating juxtaposition.  Meagher said he was inspired by Kuniyoshi not only for his aesthetic work, but also his social practice and work organizing support systems and opportunities for other artists. CalyMayor and Kelly also have a social component to their practice. The three artists have been heavily involved in artist-run exhibition spaces and have worked together organizing CollectiveShow.org, a recurring group show for artist collectives and artist-run spaces. Kelly is also a founder, along with Andrew Gori, of SPRING/BREAK, a curator-focused art fair taking place during Armory Week. 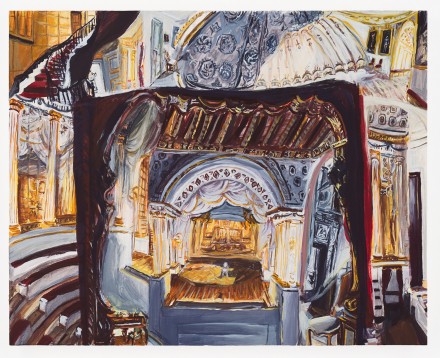 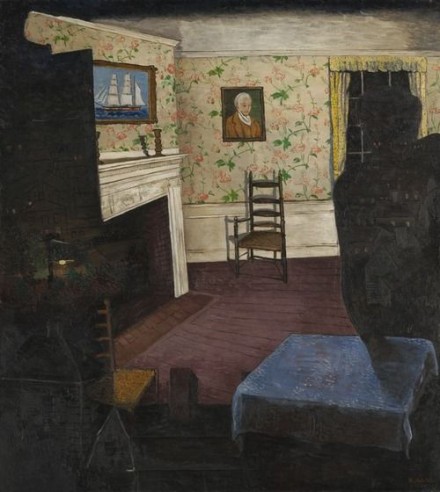 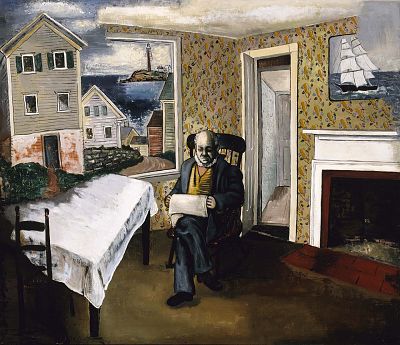 Gretchen Scherer’s The Last Show is a dark and jumbled painting of an ornate theater. The painting responds to two paintings of interiors by Morris Kantor, Haunted House (1930) and The Captain’s House. Scherer writes, “My paintings are also made up of many disjointed pieces and are based on interiors from around that time period. It is interesting that we both painted the same type of interiors, but he painted them at a time when the interiors were contemporary to him and I paint them now that they are in the past. Seeing his work for the first time revealed a sudden juxtaposition: my paintings are about looking back and trying to bring something from the past back to life. Perhaps Kantor did exactly what I hope to do but in the opposite way. He painted what was contemporary to him and with the passage of time acting as the vehicle to the past, we see a time that has long passed but is still alive through the act of his painting.”

A Faint Notion from Kambui Olujimi on Vimeo.

Kambui Olujimi’s A Faint Notion is a long exposure video of black bodies emerging from a white fog in a form of reverse erasure distorted by time, inspired by the politically inflected work of Ben Shahn. Regarding Shahn, Olujimi writes, “[he was] concerned with the undeniable subtext of the moment, the concerns of that era and the conditions of the time in which he photographed. In this way, A Faint Notion explores invisibility in contemporary times and draws directly on the recent civil unrest in Baltimore and New York City.” 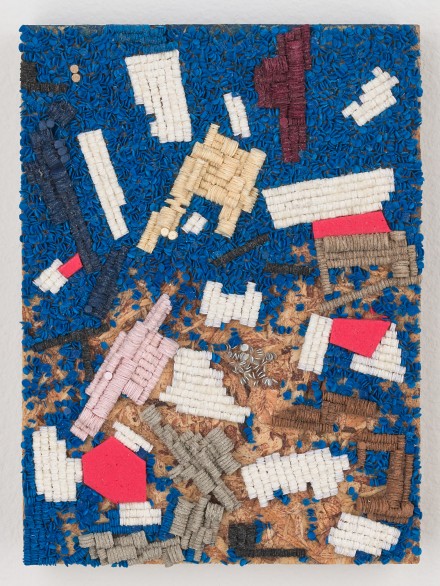 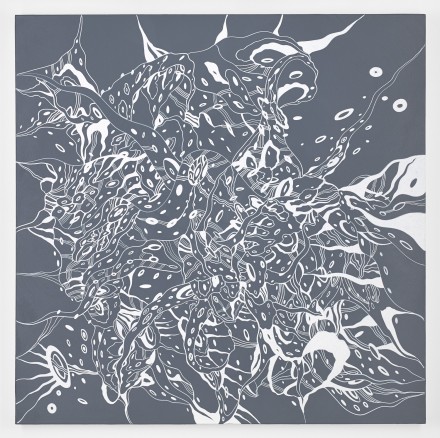 Other works in the show include Jim D’Amato’s Destiny Machine, inspired by David Smith’s idiosyncratic geometric language and Jonathan Rider’s Untitled (Landscape), which finds parallels with the angular industrial landscapes of Charles Sheeler. 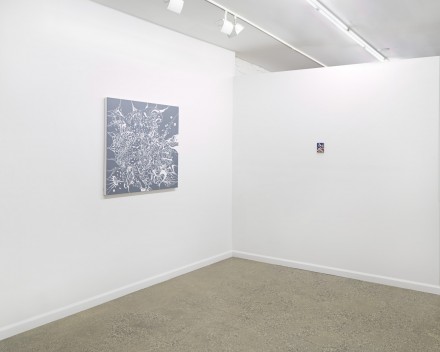 This entry was posted on Monday, November 23rd, 2015 at 12:00 am and is filed under Art News, Featured Post, Show. You can follow any responses to this entry through the RSS 2.0 feed. You can leave a response, or trackback from your own site.