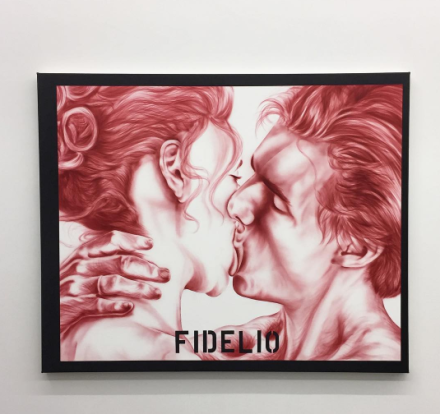 Team Gallery has opened 2017 with a commanding group exhibition, The Love Object, a show curated by Tom Brewer that draws on the writings of Roland Barthes to frame a body of works exploring love and the act of love through a more objective lens, delving into relations of bodies, texts and language as a mode of investigating not only the state of emotional attraction, but equally the frameworks we use to understand these forms. 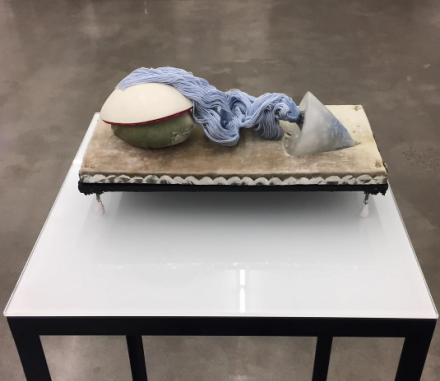 The exhibition makes impressive work of Team’s intimate exhibition space, with its selection of modestly-sized paintings and sculptures offering momentary glances and scenes that allow a fluid, gradual progression through the themes and lines each artist takes on the act of love, and its observation in turn.  In one corner, for instance, Jenny Holzer’s Survival: People Look Like They Are Dancing… makes an impressive turn on the surrounding works, each a document of abstracted bodily relationships.  Hanna Liden’s TBT, for instance, turns the body and its referents into natural forms (pine branches, to be specific), incorporating coy dialogues on natural growth and urban decay that seem to offer a commentary on the state of human love and its idealized forms.  In front of this piece is Martine Syms’s Belief Strategy XIII, a series of intersecting metal c-stand elements holding photographs documenting fragments of the body.  Clasping hands, each adorned with a wedding ring, makes for a fitting intersection of intense physical intimacy in conjunction with the artist’s interest in physical structure and symbol, amplified by the text of Holzer’s piece; “People look like they are dancing before they love.” 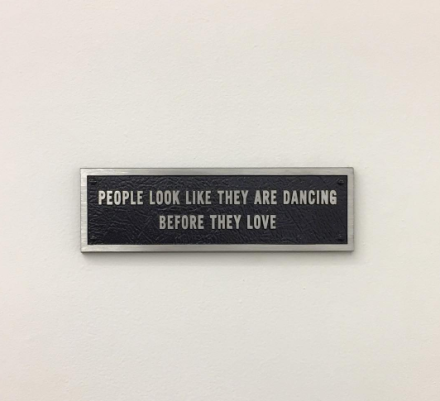 Jenny Holzer, Survival: People Look Like They Are Dancing (1984), via Art Observed

More dancing is presented nearby, with artist Georgia Wall’s subtly unnerving Barthes and The Cranberries.  The piece depicts Wall dancing in a private room, and slowly stripping to the soft rock of The Cranberries, while lines from Barthes’s ‘Waiting’ scrolls up the screen.  Playing on the dissonance between intimacy and publicity, in conjunction with the traditions of online exhibitionism Wall references, the work traces ample conflicts in the act of obsession, and the examination of desire.  Even as Wall places her body directly into conversation with Barthes’s own fetishizing of the act of love, she equally draws a line between the body in view, and the viewer (ostensibly Barthes, whose words appear while Wall’s body remains the central object). 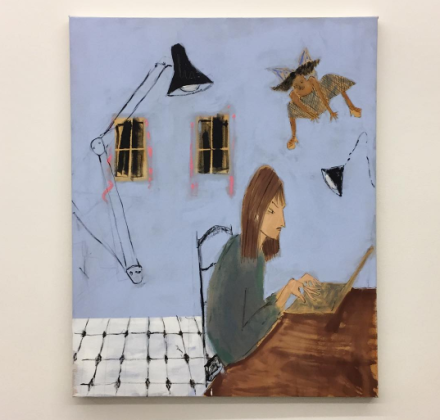 Alissa McKendrick, Lila & the Blue Faerie (from the Neapolitan Cycle) (2016), via Art Observed

These acts of physical and textual exchange offer a striking point of inquiry for Brewer’s exhibition, a body of works that delve into Barthes’s own examination of the contract between viewer and viewed, while never ceasing to problematize, critique or complicate these exchanges.  The act of consumption, of both the image or the lover, remain at the center of these works, and, much like love itself, makes the viewer’s extrication from the equation ever more difficult.

The exhibition is on view through February 18th. 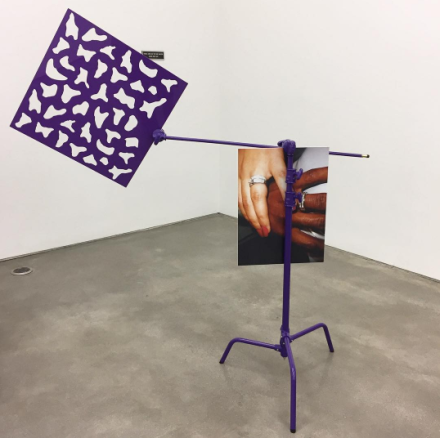 This entry was posted on Wednesday, January 25th, 2017 at 12:07 pm and is filed under Art News, Featured Post, Show. You can follow any responses to this entry through the RSS 2.0 feed. You can leave a response, or trackback from your own site.