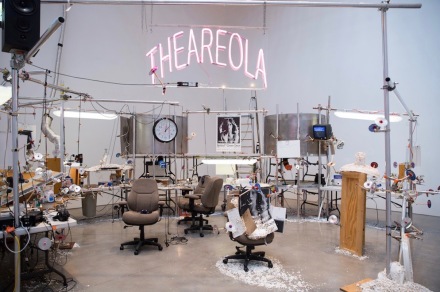 When the notorious Los Angeles artist Jason Rhoades passed away in 2006, he left behind a massive, “messy” inventory, open to various interpretations and institutional contextualizations that are still being untangled and understood today. The current survey at The Brant Foundation Art Study Center in Connecticut serves as both a tightly compacted and ambitious tribute to the West Coast artist’s legacy, reflecting his work in one giant, shifting installation. Focusing mostly on works produced in the early 2000’s just prior to the artist’s death, the exhibition presents Rhoades at the peak of his career and fame. Although My Madinah: in pursuit of my ermitage, a post 9/11 ceiling spanning neon installation of countless words referring to the female reproductive organ, stands out as somewhat troublesome in the current socio-political climate, each work helps fathom an intricate mind that challenges the ideology systems of his viewers, and himself. 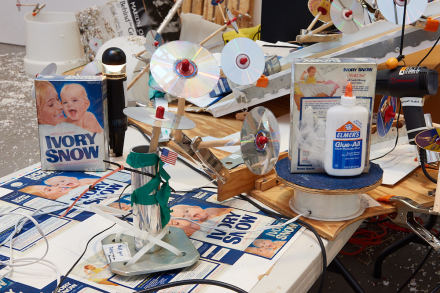 Personal and political narratives intertwine in his large scale installation The Grand Machine/THEAREOLA, in which epoxy binds white foam, green peas and salmon roe altogether into an home-brew material the artist called PeaRoeFoam. Accompanied by scores of mundane objects that range from office chairs to T.V. screens, the immersive display conveys a certain degree of modern-day angst with distinct accents of humor and sarcasm, perhaps illustrated best by the Ivory Snow detergent boxes scattered around the chaotic presentation. Marilyn Chambers, who later went on to become an adult film star, appears on the cover of the chemical product as a caring mother holding her baby. Marketing of consumerist products via promotion of domesticity and motherhood clashes with the use of womanhood in the opposite direction via the sex industry, with the actress in both versions serving as the link. 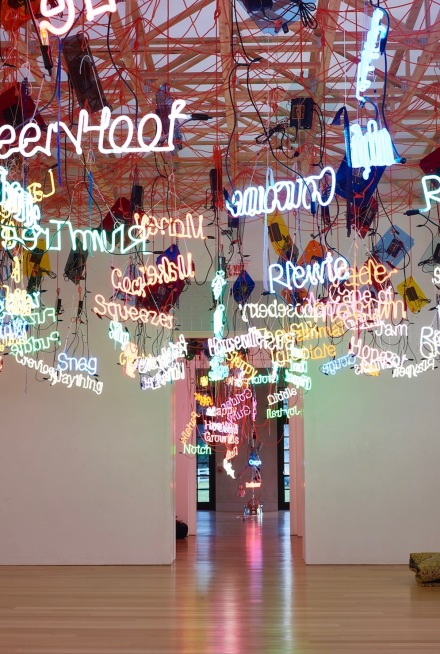 The exhibition’s most impressive and thought-provoking work is My Brother/Brancusi from 1995, touching upon contemporary issues of cultural codings, masculinity, and the gap between social classes. Originally created for the Whitney Biennial, the installation compares Brancusi’s famous Parisian studio with the suburban home Rhoades’ brother lived in. A few visual accents match between photos of two interiors; however, the real deal is to discover the diversity. Traces of a white, straight, male lifestyle in California suburbs prevail in the photos on one side; while Brancusi’s version offers a peek into the chaotic studio of an equally chaotic mind. In the center of this complex installation are cluttered objects such as his brother’s weightlifting equipments, a monster truck, and Brancusi-style abstract sculptures in reference to the human form. Most importantly, stacks of donuts that reminisce the Romanian sculptor’s towering works complete the sub-urban American life style aura. 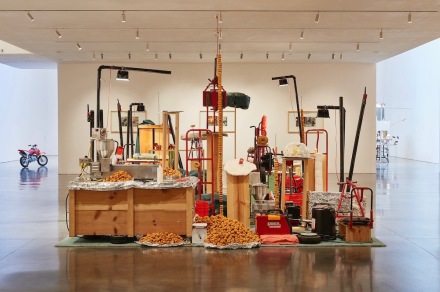 These links show Rhoades at his best, understanding subtle connections underlying the superstructures of high and low culture, and ultimately using his vantage point to bring them into close conversation. His work is on view at The Brant Foundation Art Study Center through April 1st, 2018.

This entry was posted on Friday, January 5th, 2018 at 1:26 pm and is filed under Show. You can follow any responses to this entry through the RSS 2.0 feed. You can leave a response, or trackback from your own site.