Similar to many artists who later found their true voices in relatively more alternative mediums, New York performance legend Allan Kaprow began his artistic practice as a painter, studying at the famed Hans Hoffman School of Fine Arts under the German Abstract-Expressionist who heavily influenced his work on canvas. Focusing on a ten-year period between mid ‘40s and forth, Paintings New York at Hauser & Wirth brings attention to possibly the least-known aspect of Kaprow’s decades-long career, bringing together a body of works at the gallery’s uptown outpost, a location where the former Martha Jackson Gallery housed the artist’s first Yard installation in 1961.

The exhibition serves as the U.S. leg of Allan Kaprow: Painting 1946 – 1957, first organized and exhibited by the Villa Merkel in Esslingen, Germany last year. Museum director Andreas Baur has joined forces with the New York gallery to re-contextualize the exhibition for the city Kaprow drew inspiration from for so much of his work.  Kaprow delves into the sites and energetic movements of the city, the various locales and landmarks, encounters and run-ins with the city’s residents, and other interactions with New York’s fervently paced lifestyle. The most evident example of the artist’s fascination with New York is a group of George Washington Bridge paintings occupying the first floor gallery. Brimming with heavy brushstrokes and bold hues, the paintings encapsulate both consciousness towards then-burgeoning abstract trends while embracing a traditionally representative language, all while evoking the city’s frantic movements.

A young painter’s romantic naiveté towards his subject matter is traceable in these passionately-illustrated cityscapes; however, the artist’s inquisitive hand for ‘something more’ remains visible. His interest in the mundane—which would later constitute the basis for his work in time-based arts — gives its initial signals in paintings of urban life and intimate interiors. Unsurprisingly, in both cases, he defies logic and representation with surreal touches and illusory juxtapositions of architecture and human form.  Bodies twist and turn, move and gyrate in occasionally unbelievable juxtapositions, adding a soulful, strange character to the works that make them distinctive of the city’s Post-War artistic community. 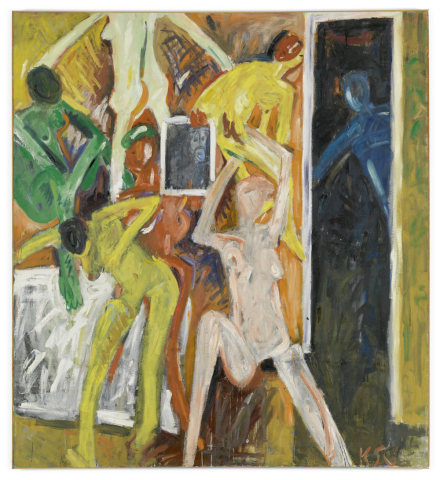 Kaprow’s paintings of urban landscapes convey anonymity and objectiveness, yet his experiments with the body challenge the physical and psychological states of his subjects, depicting matchstick-like figures in bizarre scenarios and abrupt painting gestures. The bodies burst out their frames, creating incomplete limbs or smeared silhouettes. The subjects’ performative auras gel with the ideas expressed through participants in Happenings which would later define Kaprow’s career. Similarly, his figures in paintings such as From James Joyce’s “Ulysses” or Female Nude, Sitting on a Chair engage in blurred daily acts that walk a line between familiarity and obscurity while scrutinizing concepts of productivity and function. The exhibition checklist also includes ‘action collages’ that Kaprow created in response to architectural and consumerist trends that influenced the city’s cultural landscape, gathering everyday materials such as tin foil or newspaper on canvas.

Exuding the energy that ultimately surged out of the canvas and into the world around him, Allan Kaprow’s Paintings New York is on view at Hauser & Wirth through April 7, 2018.

This entry was posted on Saturday, March 17th, 2018 at 7:34 pm and is filed under Show. You can follow any responses to this entry through the RSS 2.0 feed. You can leave a response, or trackback from your own site.