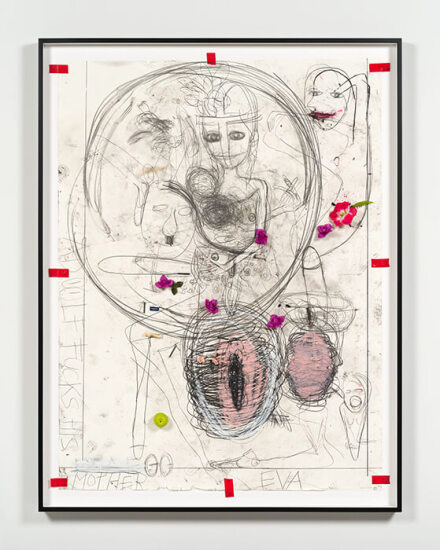 Confronting the complex mechanisms of power, politics, desire, and history, artist Paul McCarthy opens a show of new works on view at Hauser & Wirth in his home of Los Angeles this month capping a new series of “A&E” drawings, an offshoot of Paul McCarthy’s ongoing video series with German actor Lilith Stangenberg. An initialism for Adolf & Eva, Adam & Eve, and Arts & Entertainment, ‘A&E’ is a multi-disciplinary project that evolved out of the artist’s film project NV Night Vater (2019 –). Originally drawing from Liliana Cavani’s sadomasochistic erotic drama The Night Porter (1974), the project continues McCarthy’s exploration of the origins of fascism, Hollywood, the contemporary art world, and the current political climate. 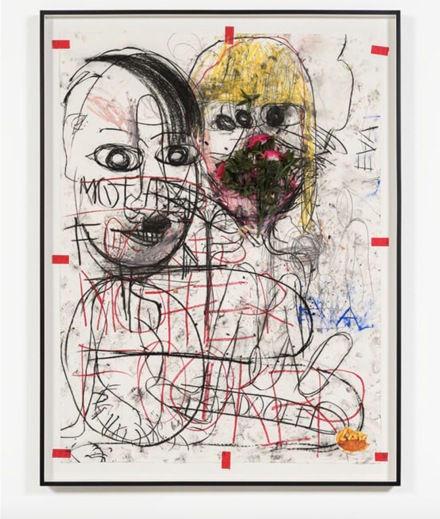 The works are, for lack of a better expression, trademark McCarthy, massive swoops of line of spatters of evocative abject colors, bringing the works down to a base expressionism that serves his subject matter well. Images are dotted with the faces of Hitler and Eva Braun, created while in character in collaboration with Stangenberg. McCarthy improvised performances between himself and Stangenberg while in character as forms of Adolf and Eva, and the images ultimately serve as documentation of both McCarthy’s incisive critical lens and his career-spanning omnivorous practice including performance, video, and drawing. The A&E drawings will be accompanied by a video work from the drawing sessions along with the platform sculpture the drawing performances were enacted upon, a strange stack of antique tables that equally calls to mind a gallows. 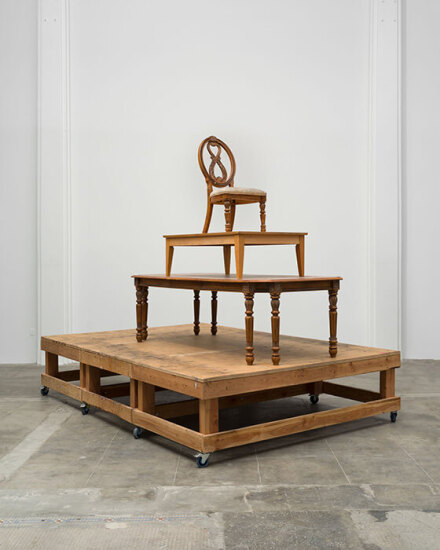 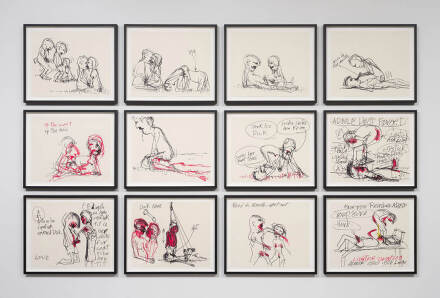 The artist has rarely shied away from this sort of controversy, and unlike prior work that so often delved into the languages of Disney pop culture, here he calls to the surface a fascist dictator whose rise to power not only destroyed so many lives, but who has since become a stand-in for all things evil. The name Hitler is used ad infinitum in modern political punditry, with talking heads evoking the dictator’s name. Here, McCarthy flips these impulses on their ear, turning the specter of evil into something both perverse and comical, so much so that his image takes on new, twisted meanings. Adding to and subverting that cultural lexicon, McCarthy seems to reflect just how language, and its attendant realities, can degrade over decades.

This entry was posted on Friday, July 15th, 2022 at 12:00 pm and is filed under Art News. You can follow any responses to this entry through the RSS 2.0 feed. You can leave a response, or trackback from your own site.