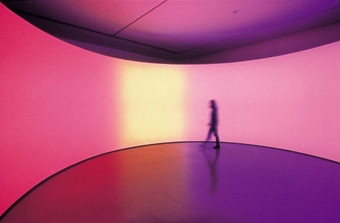 As a rule openings are casual affairs in San Francisco, dispensing with much of the pomp and circumstance, air kissing and conceptual get-up that defines its New York counterparts. A warm Wednesday evening in September proves no exception as SFMOMA celebrates its new fall exhibit: Your Tempo: Olafur Eliasson. Of course, one can still spot (if inclined to do so) the heavy hitters around town. Richard Kramlich, longtime patron of video and new media, lounges at the doorway of the Architecture and Design galleries on the second floor, pleasantly chatting with a small group of corporate sponsors (none of whom don ties). On the fifth floor, Madeleine Grynsztejn, Senior Curator of Painting and Sculpture, gracefully accepts my compliments on her lovely deconstructed suit. “It’s Comme,” she admits demurely and then playfully notes how the shifting light of a large-scale installation perfectly offsets my companion’s violet lipstick. “Stay in this room!” she jokes.

BUT don’t let the laid-back attitude fool you, the event marks quite a momentous occasion for both MOMA and Eliasson: a major mid-career retrospective for the Icelandic artist (a first in the United States) and the inaugural effort for the recently appointed curator of Architecture and Design, Henry Urbach. The show also boasts the sole U.S. engagement of Eliasson’s collaboration with BMW on the Art Car program, “Your mobile expectations: BMW H2R Project,” on view in a specially constructed chamber. By all art-world standards this adds up to a benchmark event—even if it’s taken in typical Bay Area stride.

Then again, it seems that such nonchalance is becoming somewhat of a trademark for SFMOMA, which has, over the past years, mounted an impressive array of major exhibitions, all with the same assured restraint. As many know, Miss Grynsztejn was the mastermind behind 2005’s unanimously lauded Richard Tuttle show, which sparked veritable Tuttle-mania in the art world (culminating with W’s first ever Art Issue and an extensive editorial commission from the artist). When I mention the Tuttle craze she helped spark, Grynsztejn ponders and modestly remarks: “It really was just his time.”

As for the present show? It offers a rich, if concise journey through Eliasson’s technologically varied, but thematically consistent work. Undulating through the fifth floor galleries, it unfolds into a full spatial experience that foregrounds the phenomenological preoccupations at the heart of Eliasson’s practice. 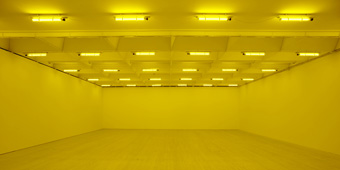 Immediately upon stepping from the elevator, we’re submerged in the incandescent glow of yellow light—a gesture that sets the tone for this confident and thoughtful survey. The subsequent rooms shift unexpectedly in formats and media: one is filled from floor to ceiling with prototypes and models of past, future and potential projects, then we’re in a dank tunnel with crystalline walls that opens onto a shifting field of geometric projections—a valentine for James Turrell and the other Light Artists to whom Eliasson is indebted. 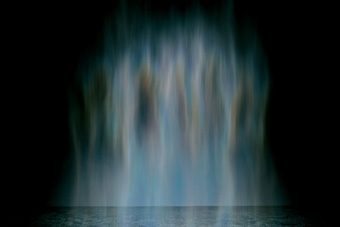 Much must be said about the curatorial effort to realize the full scope of these works, accommodating their spatial demands, and respecting often-difficult parameters. In the end, it pays off, as the layout fulfills the promise to make us “see ourselves seeing.” Rooted experience provides the common link here, and it rings loud and clear in the voluptuous materiality of each installation. So, when we come upon a wall of mist, we’re not only fascinated by it’s iridescent dance, but are overcome by the damp smell of rain, the effervescent humidity; similarly, the rippling patterns projected onto a screen or an impassive wall of moss activate a complex somatic interaction that moves beyond the habitual comfort of the purely optic. It’s not just the visual effects (which are undoubtedly lovely), but the particularities that anchor us onto a unique sense of space and time.

Given the circumstances, it’s remarkable the show achieves such a nuanced effect, since it’s mostly comprised of what we can only imagine as an install nightmare. But it seems SFMOMA likes its share of weighty challenges—only last year it managed to pump more than a ton of liquid petroleum jelly onto the fifth floor for Matthew Barney’s Drawing Restraint. Still, what emerges is more than technological feats, but Eliasson’s redeployment of romantic idioms into a technocratic context. He manages to avoid both extremes in the debate: he is not seduced by the melancholia of a foreclosed past, nor does he succumb to a facile celebration of cybernetic extension. Instead, in true philosophical form, each piece emerges as a proposition, an inquiry that’s set forth into space where it is shaped and altered but by a myriad of minute interactions and negotiations. This is a sustained examination of our modes of apprehension, and the real wonder is how these continue to be modified and recast by the fact of material circumstance. Sure, there are the expected nods to the Minimalists, especially Robert Irwin and James Turrell, there’s the echoes of Romanticism and Caspar David Friedrich, along with a healthy dose of Ponty and Husserl. But on the whole these resonances don’t provide clutter, as much as help situate the strands of a delicately extending project. 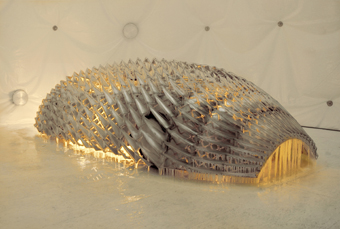 Of course, no notice is complete without a nod to the show’s centerpiece, “Your mobile expectation: BMW H2Rproject,” a hybrid car with a specially built exoskeleton that’s frozen into an oblong crystal. Visitors have to queue up and grab a grey blanket (courtesy of the museum) before entering the large industrial freezer kept at a chilly 16F. Sure, it might feel a bit like an amusement park ride, a tad gimmicky and tech-y (we’re just a stone’s throw from the Silicon Valley, after all), but in light of its track record, it seems SFMOMA can afford to indulge in a few theatrics—especially as it continues to foster such innovative and timely visions. -Franklin Melendez

This entry was posted on Monday, September 17th, 2007 at 11:21 am and is filed under Art News. You can follow any responses to this entry through the RSS 2.0 feed. You can leave a response, or trackback from your own site.