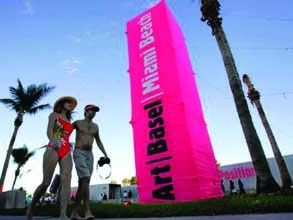 Art Basel Miami, nestled in the sun and exorbitant hedonism that epitomizes Miami, began with a flush of exhibits, salacious parties, and collagen displays yesterday. The 4-day extravaganza is the most vital art show in North America and a requisite on the growing Art Fair circuit. To accommodate, Miami, usually a place that moves at the pace of its large population of retirees- adopted a New York pace- as party after party unveiled the newest pieces the Art world has to offer.

Beginning at 10 am, a media reception in the convention center hosted champagne, deviled shrimp and an opportunity to peak at the 200 gallery displays including 1500 artists. Held in a maze of white walls, it was immense and intimidating in size and visual stimulation. One critique is that at an event this large, the most time one can dedicate to a piece is a few seconds; no matter- as is widely known almost all the displayed pieces are already sold. So why head to Miami? Regardless of its commercial grandeur, intimidating size, and general over-exposure (most of New York has headed this way- and it is more likely this year to run into a record label executive, magazine intern, or investment banker than a legitimate artist), Basel and the manifold associated satellite fairs expose the state of the art world today, the commercially-accepted frontiers, the coinciding limitations, as well mandatory networking opportunities.

Full details after the jump. 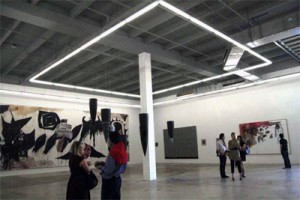 The Rubell Family Collection 95 NW 29th Street Miami FL 33193 USA
The Rubell Family Collection offers a quiet oasis from the chaos of Basel. In the Wynwood art district, it is housed in a grand high-ceilinged salon. One German exhibit featured two DJs experimenting with sound- dense beats and synthizers from a large grey sound booth, serves to elaborate on the surrounding art. 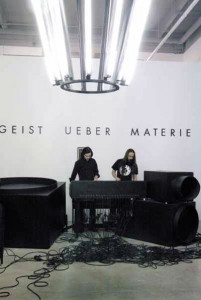 Another impressive exhibit was Jason Rhoades’ Untitled Chandelier, dangling with an assortment of neon commercial signs, “SLICE” “ORCHID” “CUZZY” amongst others, all hip-hop slang in various African and Creole languages for female genitalia. Rhoades, a California installation artist who passed away unexpectedly in 2006, is celebrated for melding such salacious ideas in unconventional, spunky displays. 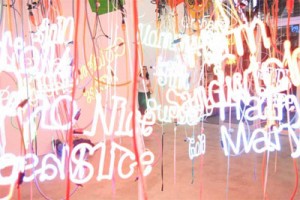 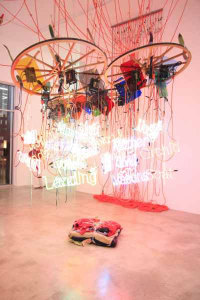 Casa Fendi offered a private lunch showcase of artists, in a Fendi-filled showroom. One artist who stood out: Argun Noor of Moodspace, who displayed an immense hanging art piece, containing thin, opaque layers of computer-generated images. When high intensity LED lights shone on the piece at different levels, the piece transformed in color and composition, resembling an undulating intergalactic universe. The artist Argun Noor previously worked at desigining Mac programs for Apple and is a self-proscribed computer nerd- an experimentalist at the forefront of technology. Thus, while listening to electronic music as inspiration, he uses his wealth of technological knowledge, to create a ‘visual mood’ inspired by light and color. Unfortunately, the LED lights prevent the exhibit from being captured justly with a camera, but it is worth viewing at www.moodspace.biz.

This entry was posted on Tuesday, December 11th, 2007 at 5:13 pm and is filed under Art News. You can follow any responses to this entry through the RSS 2.0 feed. You can leave a response, or trackback from your own site.