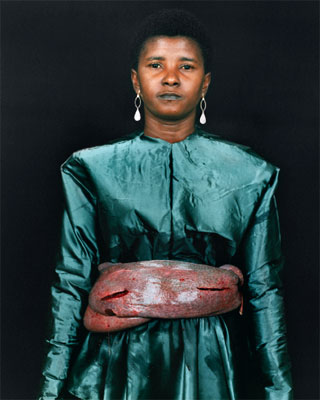 Turkish born, Brooklyn based Pinar Yolacan’s second solo show opened this evening at Rivington Arms on the lower east side tonight. Yolacan’s work features portraits of steadfast, unwavering females clothed in couture made of…animal parts. Yes, skin, claws, intestines, stomachs, are all “sewn” into garments, the undulations of flesh becoming ruffles, ruched, and lace. This show is entitled “Maria”, its Afro-Brazilian subjects are all inhabitants of Ithaparica, Bahia, a small island found off of the northeastern coast of Brazil. Yolacan has dressed them in hand made costumes that are reminiscent of colonial dress as worn by Portuguese slave masters. On top of the dresses, she drapes various “garments” frozen animal parts, which thaw as she shoots. By the end of the shoot, the meat is close to rotten and discarded while the images are left as a memory of her constructed identities – Yolacan stated in a style.com interview, “When you put on the clothes of another culture, it changes how you stand, how you feel, the gestures you make.”

Images from the opening after the Jump This entry was posted on Tuesday, December 4th, 2007 at 8:31 pm and is filed under Art News. You can follow any responses to this entry through the RSS 2.0 feed. You can leave a response, or trackback from your own site.

One Response to “Pinar Yolacan at Rivington Arms”