GO SEE: Gilbert and George at the de Young museum

Gilbert and George, via The Sunday Morning Herald

A retrospective of photographs by Gilbert and George will be exhibited in the show, “Gilbert and George”,at the de Young Museum in San Francisco, running from February 15th – May 18th. The influential artists have been producing art together since the 1970’s, beginning with performance and then photography. The show opened at the de Young Museum on February 15th, celebrating their influential careers in the art world. The collection is on loan from the Tate Modern in London, and is largest traveling retrospective of Gilbert & George’s work ever sent on tour. The Fine Art Museum of San Francisco is quoted as being “honored to display the collection.” 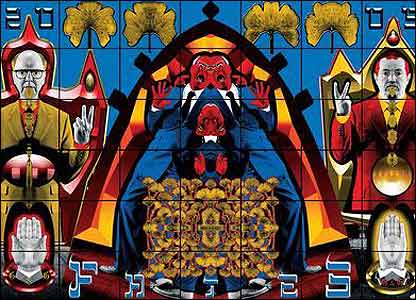 Opening night was held last Friday, 5:00–8:45 pm. A number of events and lectures had been arranged for people of all ages. They featured performance by Jello Biafra, Penelope Houston, and Fauxnique. There was a concert with music played by DJ Kristen Rice. A charity dinner was arranged and tickets needed to be purchased ahead of time. Overall, the opening night of the Gilbert and George retrospective was used as a gala. It was a spectacle of it’s own.

This entry was posted on Tuesday, February 19th, 2008 at 11:24 am and is filed under Art News. You can follow any responses to this entry through the RSS 2.0 feed. You can leave a response, or trackback from your own site.