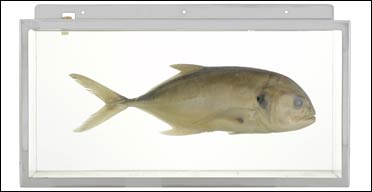 The work for sale via Guardian Uk

Back in the 1990’s– after his now-famous Physical Impossibility of Death in the Mind of Someone Living, (aka the shark), was first shown at the Saatchi gallery in London, but before he won the prestigious Turner Prize – Damien Hirst gave a fish in formaldehyde to the owner of a fish-n-chips shop in Leeds as a gift. Bonhams has just announced they’ll offer the work this Fall for an expected £100,000- 150,000.

Darren Walker in his fish-n-chips shop via Telegraph Uk

The chip shop owners, Darren Walker and his family, were friends of Hirst and his brother Bradley, from school. Bradley was working at the shop while Damien was gaining notoriety in the art world for his (often fish-oriented) work. As Walker explains in the Bonhams press release, “we joked that it would be nice to get something like that for the shop. Two weeks later our fish in formaldehyde arrived.”

The artwork, which was never insured, hung on the walls of the chip shop until the shop closed and the fish went home with Walker. The auction house said they expect to sell the work for between £100,000- £150,000 in October.

This entry was posted on Tuesday, March 18th, 2008 at 5:55 pm and is filed under Art News. You can follow any responses to this entry through the RSS 2.0 feed. You can leave a response, or trackback from your own site.