Round-Up: The Whitney Biennial Opens in New York, Spills into the Armory 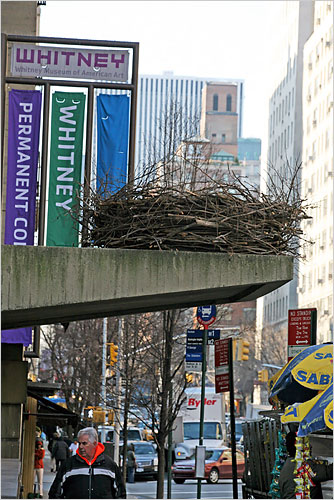 “Animal Estates” by Fritz Haeg via the New York Times

Themes brought out this year include the ephemeral nature of art, time and memory, evident in pieces like Fritz Haeg’s “Animal Estates.” The majority of the work this year was commissioned especially for the show. This year the Whitney Biennial has spilled over into the Park Avenue Armory with an ambitious program of performance, events, temporary installations, videos, and other public programs. Curators Henriette Huldisch and Shamim Momin reference the Biennial as a political show in terms of its questions asked. Coco Fusco, who has a video, “Operation Atropos,” in the show, will host a public talk at the Armory about women in the military — an example of one of the overtly political pieces in the show (Spike Lee’s “When the Levee’s Broke” is also present). Coco Fusco, A Room of One’s Own [Whitney ]

Assemblage, collage, and untraditional materials are used frequently in the show. Phoebe Washburn pushes the idea of environments, creating an ecosystem by planting paper-whites in brightly colored golf balls immersed in 60 gallons of circulating Gatorade.

While some have noted that mood of the show, perhaps reflecting the world (and art market) economy is arguably less glamorous than biennials of the recent past, there is a tequila bar, courtesy of artist Eduardo Sarabia. A few years ago, he had some special tequila made and imported to New York, then moved to Berlin and opened a sporadic, unlicensed bar in the basement of an art school. His work at the Armory is an elaborated version of the Berlin bar.

A woman looks at “strike” by Shannon Ebner [ The China Post ] This entry was posted on Thursday, March 6th, 2008 at 4:11 pm and is filed under Art News. You can follow any responses to this entry through the RSS 2.0 feed. You can leave a response, or trackback from your own site.