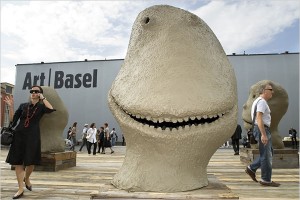 A view of Art Basel via the NY Times

The largest international contemporary art fair opened June 4th (through June 8th) in Basel, Switzerland. The show, run by Annette Schonholzer and Marc Speigler, has occurred every spring since its inception in 1970. An estimated 60,000 people are expected to show up at the four-day fair. This number includes artists (2,000), collectors, galleries (300), as well as art enthusiasts, representing thirty different countries viewing art in the mediums of painting, drawing, sculpture, installation, performance and video art. 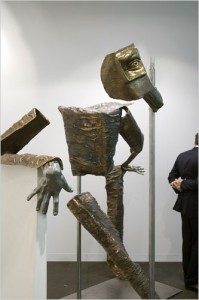 a work by Frederick Kiesler via the NY Times

“At some fairs, it seems that every booth is showing Andreas Gursky; at others, that ‘everyone’ has Anish Kapoor or Andy Warhol’s 1970s portraiture.” This is a pattern seen regularly as Dealers show works comparable to the works that were successful in the last big art show.

As The New York Times says, “Art Basel is still a place to see and be seen.” Some of the guests in attendance this year have been Russian billionaire Roman Abramovich, Glenn Lowry who is the director of the Museum of Modern Art in New York, as well as Brad Pitt and director, Sofia Coppola. 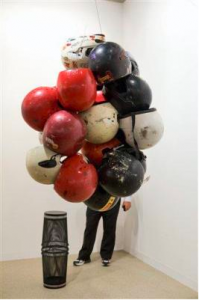 A work by Abraham Crozilleggs via mercury news

The art exhibited can date anywhere from the early 20th century to finished the previous week. Not only is this show the largest international contemporary fair but it is also one of the most innovative, adding new elements each year, which plays a major role in the ongoing success of the show.

Every year, 99% of the galleries that attend Art Basel, reapply though this does not mean you have a guaranteed spot the following year. For the 2008 fair, 1,100 applied, but only one third was admitted. This year big names will be present at the Art Basel in Switzerland, some of which received record prices last month at Sotheby’s in New York.

Eva and Adele browsing via the NY Sun

Attendees and the world news organizations are awaiting the results of the fair, which should be a major data point in the analysis of the current state of the art market. 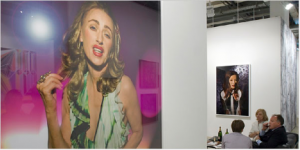 A work by Cindy Sherman via the NY Times 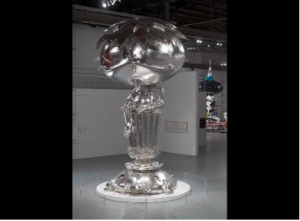 an work by Murakami via Bloomberg 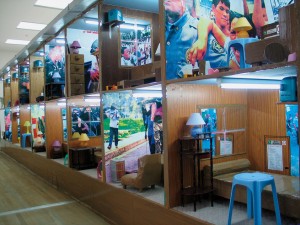 an installation by Thomas Hirschhorn via artdaily

This entry was posted on Thursday, June 5th, 2008 at 7:01 pm and is filed under Art News. You can follow any responses to this entry through the RSS 2.0 feed. You can leave a response, or trackback from your own site.