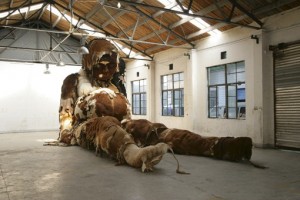 Through July 25, Chelsea’s Pace Wildenstein is showing Chinese artist, Zhang Huan. The exhibition Zhang Huan: Blessings will take place at the two Wildenstein galleries in Chelsea.  The artist lived in New York for eight years before moving back to Shangai in 2006.  The works are notable if not only for their ambitious scale. 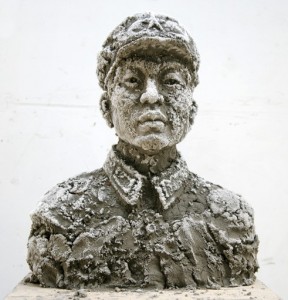 According to the gallery writeup on Zhang Huan, after his return in China, the artist was confronted with a Buddhist culture clash.  He has been inspired by religion and used ash as a staple material for paintings and sculptures.  He says that the ash is “the collective spirit and collective thinking, and collection wishes of the people in China.” 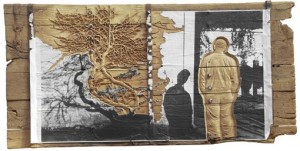 At 545 West 22nd Street, Canal Building is a dramatic piece from the collection: it is a painting of Chinese workers rendered on site, a process which started in advance of the opening and continuing until a few days after.  The piece is be made entirely of ash from burned temple incense.

At the other gallery,534 West 25th Street, Giant No. 3 (2008) is a colossal, 15 foot high figure made from cowhides, steel, wood, and polystyrene foam.  The sculpture represents a pregnant woman with her child clinging to her neck. 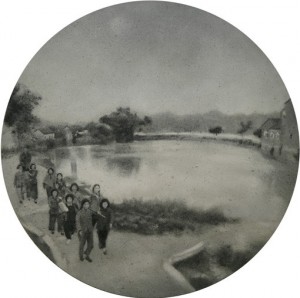 Zhang Huan is currently one of the most influential, working contemporary artists out of China.  He was born in 1965 in a small town called Anyang, just before the Cultural Revolution.  After studying art (Art Department, Henan University, Kaifeng, Central Academy of Fine Arts in Beijing), Zhang Huan’s first public exhibition was at the National Art Museum of China (China Art Gallery) as part of a group exhibition for students at the Central Academy.  Zhang Huan’s work is part of nearly 40 public collections worldwide.

This entry was posted on Monday, June 23rd, 2008 at 7:36 pm and is filed under Go See. You can follow any responses to this entry through the RSS 2.0 feed. You can leave a response, or trackback from your own site.