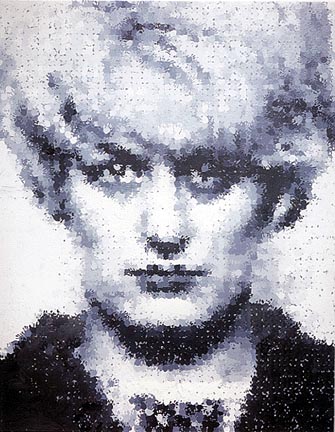 Painting of Myra Handley by artist Marcus Harvey via Time

At a promotional event in Beijing for the London 2012 Olympics, a video montage produced by Visit London has sparked controversy when a photo of a painting by British artist Marcus Harvey came across the screen. The painting depicts the British child murderer, Myra Hindley; as an unintentional representation of British Heritage. The video was intended to promote London and the coming 2012 Olympics, but the quick glimpse one of London’s most prominent murderers was likely done in accidentally rather than in “poor taste”. The painting is very recognizable as a major fixture in Charles Saatchi’s famous 1997 Sensation shown in London and the Brooklyn Museum. 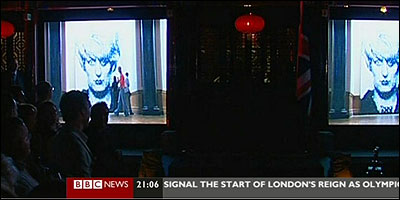 The subject of this painting, Myra Hindley, was the woman behind the Moors Murders of the 1960s. Hindley and her accomplice killed and tortured 5 children. 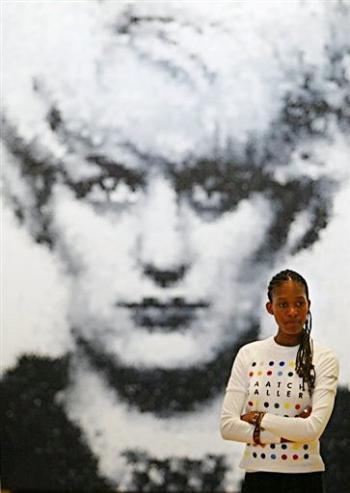 Gallery assistant in front of “Myra” by Marcus Harvey via AFP

Well-known Young British Artist, Marcus Harvey, originally showed the controversial painting in the 1997 show, “Sensation”, which featured other artists from Saatchi’s collection such as Damien Hirst and Tracey Emin. Even then, when it was showed at the Royal Academy, the painting created turbulence and was vandalized. The painting is made up of thousands of children’s hand prints, and although the Young British Artist movement is something to be proud of, the particular Harvey painting depicts the image of a highly recognized and detested murderer.

A Spokesman for Boris Johnson has said, “The mayor is deeply concerned by the realisation that a shot of Myra Hindley was shown in a short video at London House and asked that it not be shown again.”

This entry was posted on Wednesday, August 27th, 2008 at 2:31 pm and is filed under Art News. You can follow any responses to this entry through the RSS 2.0 feed. You can leave a response, or trackback from your own site.