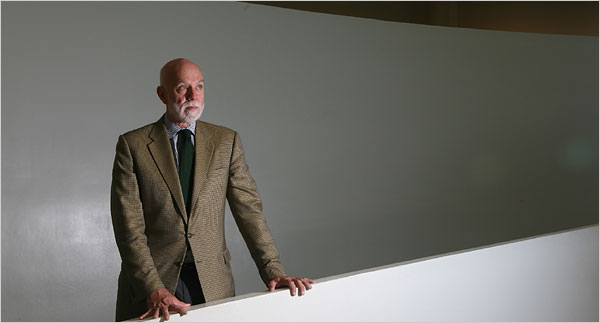 Richard Armstrong, the new Director of the Guggenheim via NY Times.

As anticipated by Art Observed earlier this month in a report here, Richard Armstrong of the Carnegie Museum of Art in Pittsburgh has been named the new Director of the Soloman R. Guggenheim Foundation and its flagship the Soloman R. Guggenheim Museum in New York.  The announcement made yesterday by the Board of Trustees follows an extensive seven-month international search. The search begin February 2008 after Thomas Krens resigned as Director of the Guggenheim after nearly 20 years. Armstrong served four years as Chief Curator and Curator of Contemporary Art at the Carnegie Museum prior to his appointment as director there. He has also worked previously as the curator at the Whitney Museum of American Art where he organized four biennials and as curator at La Jolla Museum of Contemporary Art, California.

The Board’s selection of Armstrong signifies a change in direction for the foundation who is aiming to reaffirm the New York museum as the center of the Guggenheim’s efforts. As Jennifer Blei Stockman, president of the Board stated in an interview with the NYTimes “We were looking for someone with a passion for art who understood that the New York museum is at the center of our universe.” The change follows controversy within the institution in response to former Director Krens international ambitions. Nonetheless Armstrong will also be responsible for the foundation’s global network which includes the Peggy Guggenheim Collection in Venice, the Guggenheim Museum Bilbao in Spain, the Deutsche Guggenheim in Berlin, as well as the Guggenheim Abu Dhabi Museum scheduled to open in 2013. 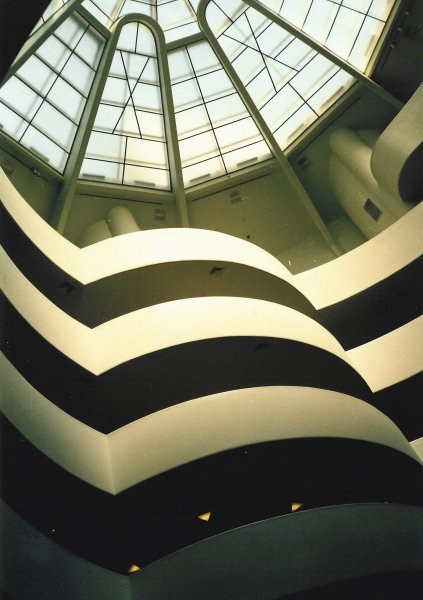 The interior of the Guggenheim which has recently completed three-years of renovations, via NYC Architecture.

In making the announcement, William L. Mack, Chairman, Board of Trustees, Solomon R. Guggenheim Foundation, said, “Richard Armstrong has the wisdom and demeanor—as well as the knowledge, stature, and status—we sought in a new leader for the Foundation. But there’s more: he clearly demonstrated a passionate kinship with the Guggenheim’s singular exhibition program, its collections, and with its global mission of promoting the understanding and appreciation of Modern and contemporary art and architecture.”

Jennifer Blei Stockman, President, Board of Trustees, Solomon R. Guggenheim Foundation, said, “We already knew about Richard’s extraordinary reputation as a sophisticated citizen of the global art world. What we learned during our search was that Richard leads with a rare combination of skills—artistic vision, diplomacy, and inspiration. All of us at the Guggenheim welcome Richard and the new leadership he will bring to the next chapter of our history.”

“The invitation to serve as the fifth director of the Solomon R. Guggenheim Foundation is a great honor,” said Mr. Armstrong. “The Guggenheim’s exceptional collection, iconic architecture, distinguished staff, and visionary history—not just in New York, but in its other locations around the world—make my new leadership role a great and welcome challenge. One of my early goals will be to build on the legacy and mission of the museum, recognizing its idealism and allegiance to artists.”

In his role as Director of the Foundation, Mr. Armstrong will work with the directors of each Guggenheim museum—and with the international curatorial team—to develop exhibition programs and a collections’ development plan that demonstrates a coherent creative vision for the global museum network.

Outgoing Foundation Director Thomas Krens says of Armstrong’s appointment, “I have known Richard Armstrong, and his work at the Whitney and the Carnegie, for as long as I have been at the Guggenheim. I could not think of a better choice for the next director. Richard brings to the task the requisite knowledge, strength, experience, and openness to lead the Foundation in an exciting and rapidly changing world.”

Madeleine Grynsztejn, the Pritzker Director of the Museum of Contemporary Art in Chicago and a long-time colleague of Mr. Armstrong, predicted that Mr. Armstrong’s appointment as Director would mean a “golden era for the Guggenheim, much as it was for the Carnegie Museum while he was there.” In explaining her comments, Ms. Grynsztejn went on to say, “Richard is an exemplary model for a museum director—that rare candidate who combines indisputable integrity and prescient curatorial acumen with the ability to mentor, inspire and win the loyalty of staff, board members and artists alike.”

Along with the Foundation’s Board Chair and President, Mr. Armstrong will share responsibility for creating a global strategic plan. Working with trustees and the Chief Operating Officer, Marc Steglitz, Mr. Armstrong will assume the lead in ensuring the progress of the Guggenheim by overseeing development, creating and implementing annual and long-term plans, building the endowment, securing public funding, and maximizing sources of earned revenue.

Chaired by William Mack and Jennifer Blei Stockman, the Search Committee involved in Mr. Armstrong’s appointment included eleven Guggenheim Foundation trustees who combine a distinguished array of public and private sector experience with a deep and significant involvement with the Guggenheim and other museum and cultural organization boards. The search was conducted by New York-based executive search firm Phillips Oppenheim.

During his 12 years of leadership at the Carnegie Museum of Art, Mr. Armstrong spearheaded the renovation of many of the museum’s galleries, including the Scaife Galleries, the Heinz Galleries, and the expansion of the Heinz Architectural Center. He was also responsible for expanding the museum’s collections with the purchase of significant pieces of contemporary art, including, in 2006, a joint acquisition with the Albright-Knox Art Gallery in Buffalo of Rachel Whiteread’s large-scale sculptural installation Untitled (Domestic), 2002. In 2003, the museum acquired the Charles “Teenie” Harris Archive, a collection of more than 80,000 negatives by Teenie Harris, considered one of the most important documentations of African American life in the 20th century. Mr. Armstrong remains Director through November 3, 2008.

Also under Mr. Armstrong’s guidance, the Carnegie Museum raised significant support for endowment, including: a generous gift from the Fine Foundation in support of the Carnegie International exhibitions; a sizeable gift from the Alan G. and Jane A. Lehman Foundation to establish a named curatorship in decorative arts and to support the purchase of decorative art, as well as paintings and sculptures made prior to 1970; and the Jill and Peter Kraus Endowment for Contemporary Art.

Prior to his appointment as Director of the Carnegie Museum, Mr. Armstrong served four years as Chief Curator and Curator of Contemporary Art. From 1981 to 1992, he was a curator at the Whitney Museum of American Art, where he organized four biennials, as well as exhibitions on Richard Artschwager and The New Sculpture 1965-75. He also served as a curator at La Jolla Museum of Contemporary Art, California.

Mr. Armstrong, who grew up in Kansas City, MO, graduated from Lake Forest College in Illinois with a Bachelor of Arts in Art History. He also studied at the Université Paris, Sorbonne, and the Université Dijon. The Guggenheim board reported that prior to his official start date Mr. Armstrong has plans to visit the Guggenheim museums in Venice, Bilbao, and Berlin.

This entry was posted on Wednesday, September 24th, 2008 at 11:43 am and is filed under Art News. You can follow any responses to this entry through the RSS 2.0 feed. You can leave a response, or trackback from your own site.