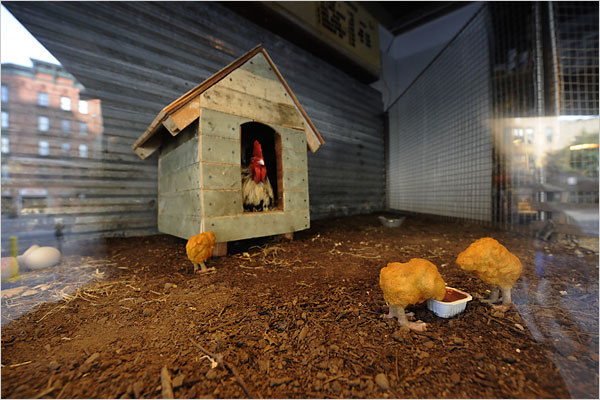 Nuggets by Banksy, at the Village Petstore and Charcoal Grill, via the New York Times

Two new Banksy rat murals have gone up (following two previous murals, as covered by AO here and here); one at the corner of Houston and MacDougal, the other at Canal and West Broadway. The murals are tie-ins for The Village Pet Store and Charcoal Grill, Banksy’s new installation/storefront in the West Village and his first official show in New York. The storefront features a number of animatronic representations of animals and food derived from animals, highlighting the disintermediation between the two due to excessive processing and the contemporary consumerist, fast food culture. “I wanted to make art that questioned our relationship with animals and the ethics and sustainability of factory farming,” said Banksy, quoted through a publicist in the New York Times. “But it ended up as chicken nuggets singing.”

VILLAGE PET STORE AND CHARCOAL GRILL
89 7th Avenue South – between West 4th Street and Bleecker
10am to 12am every day
through October 31st, 2008 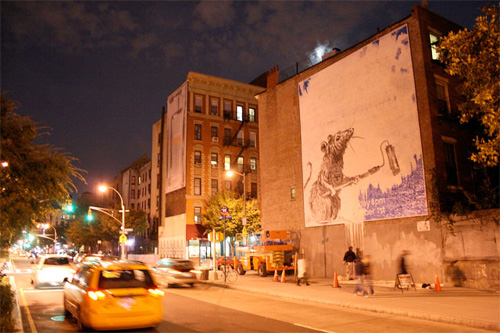 Banksy mural at Houston and MacDougal streets, via ArtFagCity 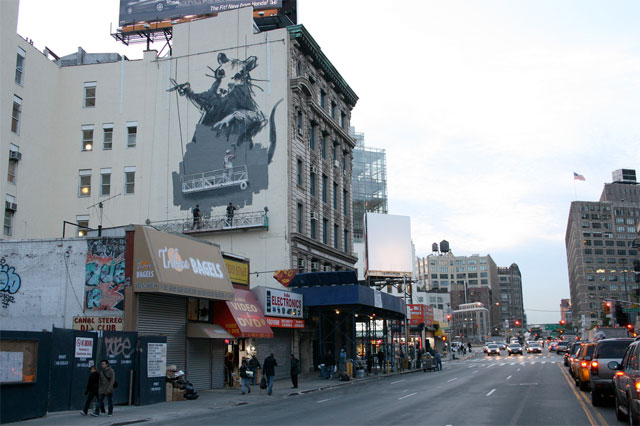 Banksy mural at Canal and West Broadway, via Gothamist 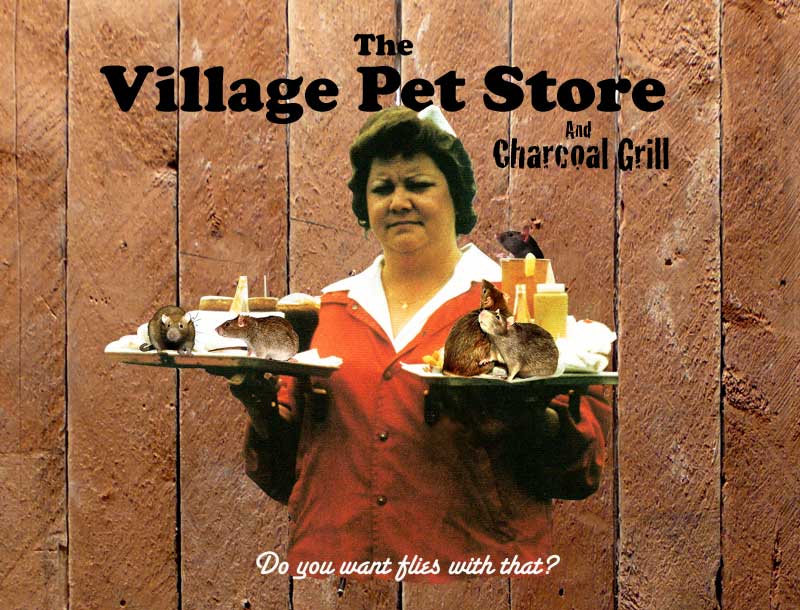 Fish sticks swimming in a fishbowl, hot dogs sauntering around terrariums, a dejected featherless tweety bird, chicken nuggets dipping themselves in mystery sauce, and a white rabbit with a pearl necklace filing its nails in front of a mirror are among the features at the pet store. The ‘pet store’ metaphor is also extended, with boxes of pet supplies and pet food, stacked next to cans of Hormel pork bits and other heavily processed meats. 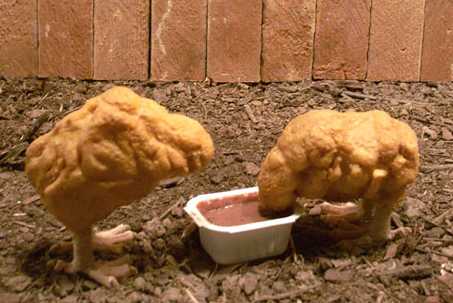 Chicken Nuggets by Banksy, via The Village Petstore and Charcoal Grill 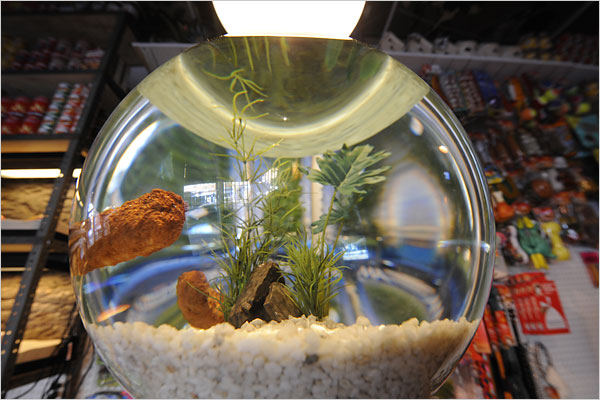 Fish Sticks by Banksy, at the Village Petstore and Charcoal Grill, via the New York Times 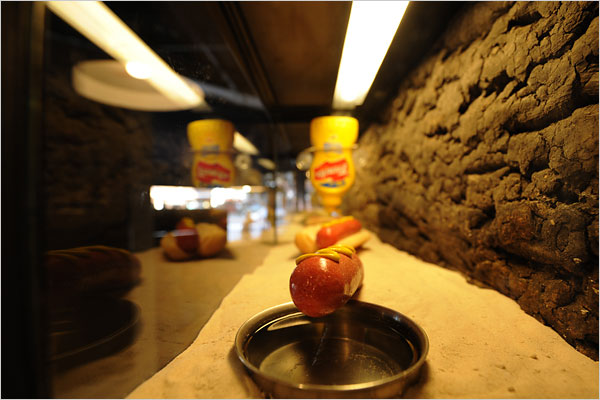 Hot Dogs by Banksy, at the Village Petstore and Charcoal Grill, via the New York Times 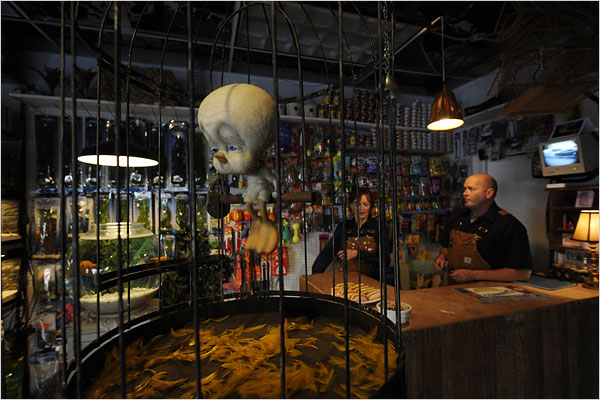 Tweety, by Banksy, at the Village Petstore and Charcoal Grill, via the New York Times 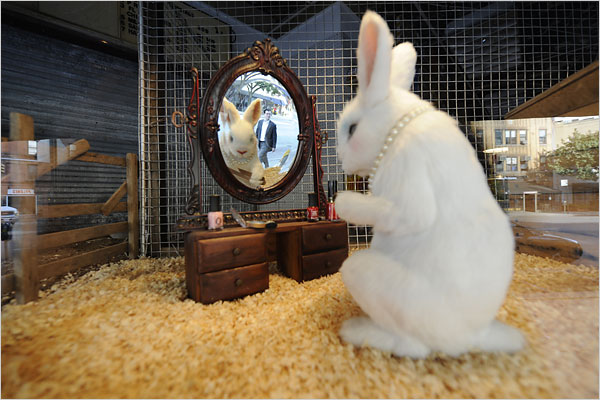 White Rabbit by Banksy, at the Village Petstore and Charcoal Grill, via The New York Times 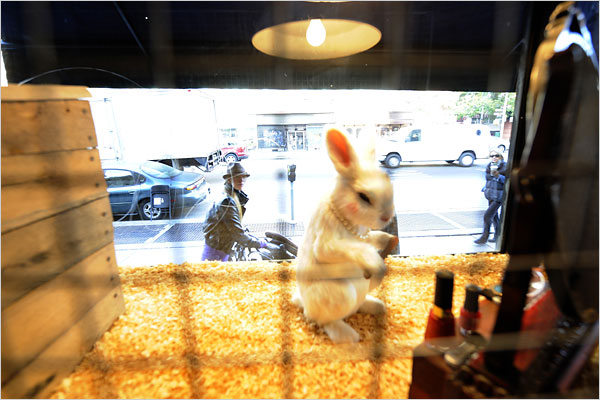 White Rabbit by Banksy, at the Village Petstore and Charcoal Grill, via the New York Times

EDUCATION LASTS; 1927 PULASKI ACADEMY GRADS WILL BE AMONG THOSE AT ALUMNI BANQUET.(Neighbors Oswego)

Golden Lynn and Mildred Olmstead were the associate editors. Ella Calkins was a Lincoln Essay Medal winner and appeared in two plays. Orla Rood was senior class secretary. Melba Rogers was in a play, “Kyan’s Proposal.” A poem next to Frances Nichols’ photo described her as “small of stature and quiet by nature.” The six are all that remain of the 24 members of the Class of 1927 at Pulaski Academy, when kindergarten through 12 grades were housed in a two-story brick building on South Jefferson Street that now houses a heating, plumbing and electrical contractor.

A broken leg will keep Melba Rogers Van Arsdale, 93, home in Central Square. Assorted ailments make it unlikely that Orla Rood Skinner, 92, will attend. Nichols, 95, who taught elementary school in Pulaski for 30 years, also said she will not attend.

“It’s a time for our little group to get together,” said McChesney, who along with Skinner lives at Springbrook Apartments, a senior citizens complex in Pulaski. “We’ll tell a lot of the same stories.” “And see who’s gotten another hearing aid,” added Drake. That brought a laugh from four of the group, who gathered recently at Springbrook to talk about life as schoolgirls in the 1920s.

Just getting to school was a challenge in the days before big yellow buses.

Webb, a long-time Sunday school teacher and organist at Fernwood Baptist Church, recalled getting up at daybreak to catch a train at Daysville, near Selkirk Shores, to get to school.

Others walked. McChesney lived near Port Ontario and faced a 3 1/2 -mile hike along the Salmon River, “unless I could get a ride on Mr. Litz’s milk truck,” she said.

Skinner said she sometimes caught a ride with a third-grade teacher, or took a train from her home near Richland to Pulaski.

All laughed when asked about snow days.

“Dear me, no,” said Drake. “We were snowed in all winter, but you just went to school anyway.” All agreed that discipline was paramount, as was the emphasis on what are now called the core subjects: math, English, social studies and science.

“Our principal, Mr. Irving Gladstone, was very formal,” said McChesney. “When he passed you in the hall, he always addressed you as Miss or Mr.” All four agreed that a return to basics in education would help today’s students.

“They teach too many subjects,” Webb said. “We should get back to the four Rs.” But then as now, the Class of 1927 found time for fun and mischief.

Drake recalled a day when the strict Principal Gladstone was absent from school.

“The boys in study hall hung toilet paper and drew mustaches” on busts of famous men on the classroom shelves, recalled Drake. All agreed that none of the girls were involved in the escapade. go to website pulaski high school

Webb and Drake also fondly recalled a senior class trip to an amusement park at Longbranch Park in Liverpool. The ride park closed in 1938.

“I remember Mrs. Sharp, she was the class adviser, she just screamed all the while she was riding the Ferris wheel,” Webb said.

Webb, Drake and McChesney said they were looking forward to next week’s reunion.

Pulaski alumni dinner Pulaski high school graduates who have not made reservations for the June 29 alumni reunion dinner and would still like to attend can call Patricia Ingraham at 387-3777. Dinner starts at 5:30 p.m. Tickets are $12 per person.

PHOTO Dennis Nett/Staff photographer GRADUATES OF the Pulaski Academy class of 1927 are among those who gather every year for an alumni reunion. This year marks their 75th anniversary. Pictured are (from left) Mildred Drake, Golden McChesney, Orla Skinner and Ella Webb. They say some of their male classmates are to blame for the toilet paper and mustaches that ended up on busts of famous men in their classrooms one day when the principal was absent.

This entry was posted on Thursday, October 9th, 2008 at 5:04 pm and is filed under Art News. You can follow any responses to this entry through the RSS 2.0 feed. You can leave a response, or trackback from your own site.