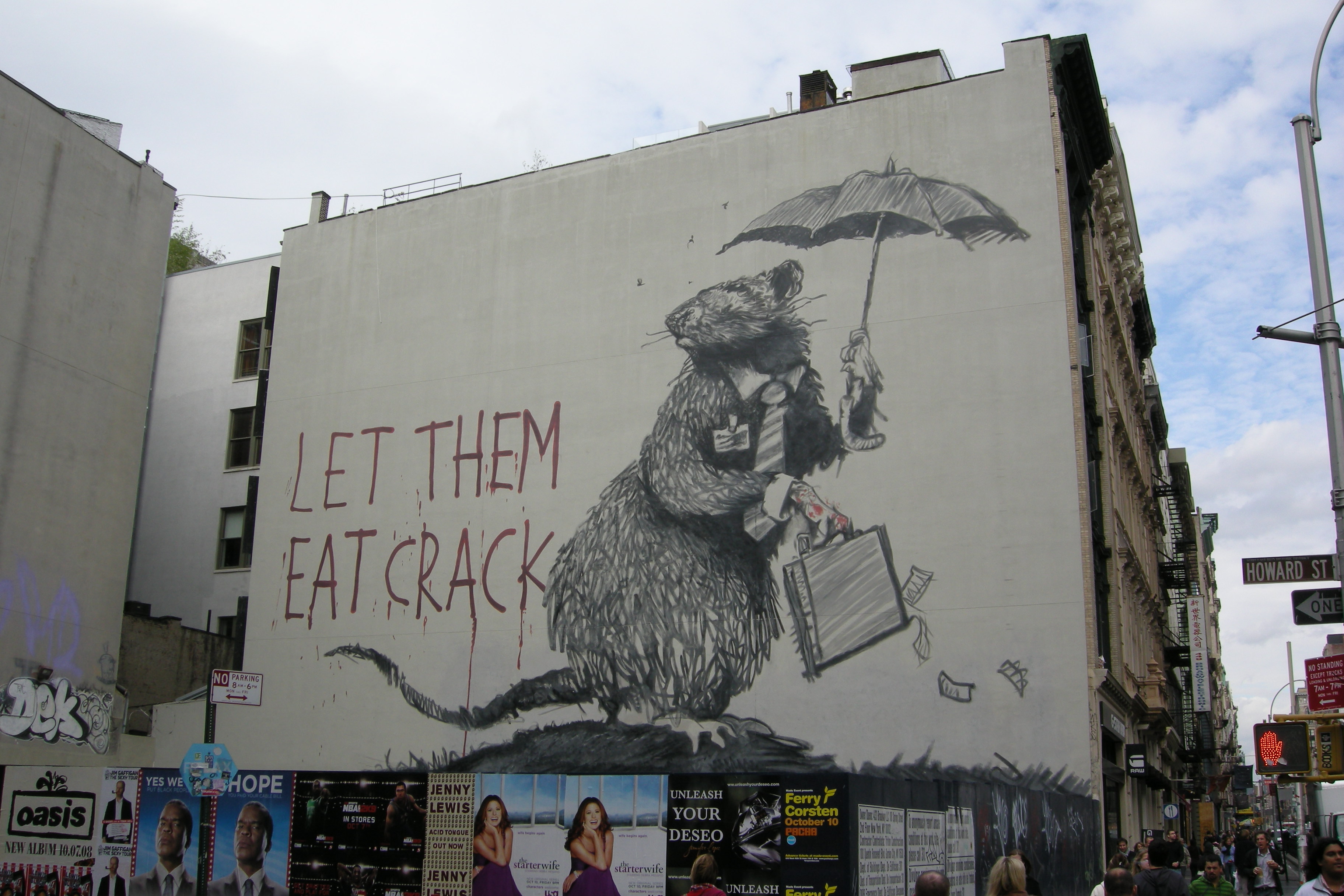 Bansky mural at Howard St. and Broadway photo by ArtObserved

The large-scale Banksy piece on the corner of Howard St. and Broadway in Soho is the second entire-building-facade work found in downtown Manhattan this week (the first covered by ArtObserved here) and is also the second collaboration between Banksy and the professional advertisement firm, Colossal Media.  The massive rat, filled with fast scrawling black-lines to appear as if done in crayon or marker, stands next to dripping red letters reading, “LET THEM EAT CRACK.”

Works such as these raise questions about the current phase of the artist’s career.  After achieving extremely widespread recognition through guerrilla installations and “culture-jams” such as his infamous museum hunts, Banksy’s most recent work may raise questions as to the potential irony of commercializing street-art culture.  Or is the work simply self-promotion in one the capital cities of the street art genre?  With the graffiti sale flop at the Lyon and Turnbull’s auction on September 27th resulting in many Banksy lots being pulled, is there still a market for such guerrilla art or is Banksy trying to transcend the market and transform himself?  That an underground street artists it cooperating with ad firms to work on large, legally rented spaces is in many ways paradoxical at the very least, and perhaps even more so considering the seeming celebration of ostensibly street-worthy terms such as “crack” juxtaposed with the reference of a businessman as a rat.   Having done campaigns for Nike and Diesel in the past months, Colossal Media, in one instance, said their goal was to “reach urban taste-makers in trendy neighborhoods throughout Manhattan and Brooklyn using hand painted wall murals.” Local NYC graffiti artists reacted to the mural by painting “!!! DAMN RATS” in large, legible letters below the mural, though the attempted vindication is not very visible at street level. 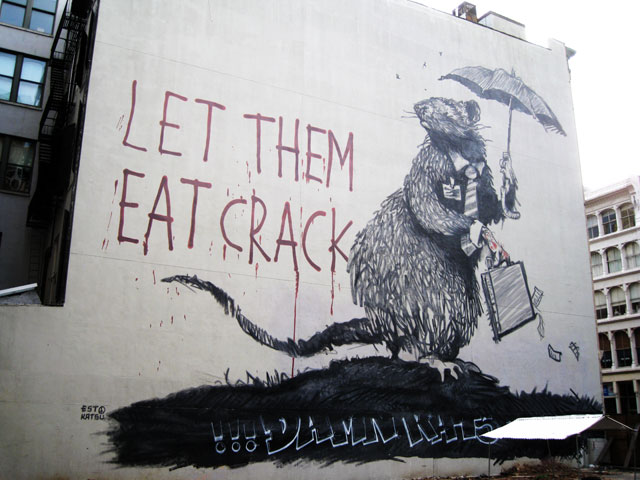 Banksy mural at Howard St. and Broadway via Gothamist 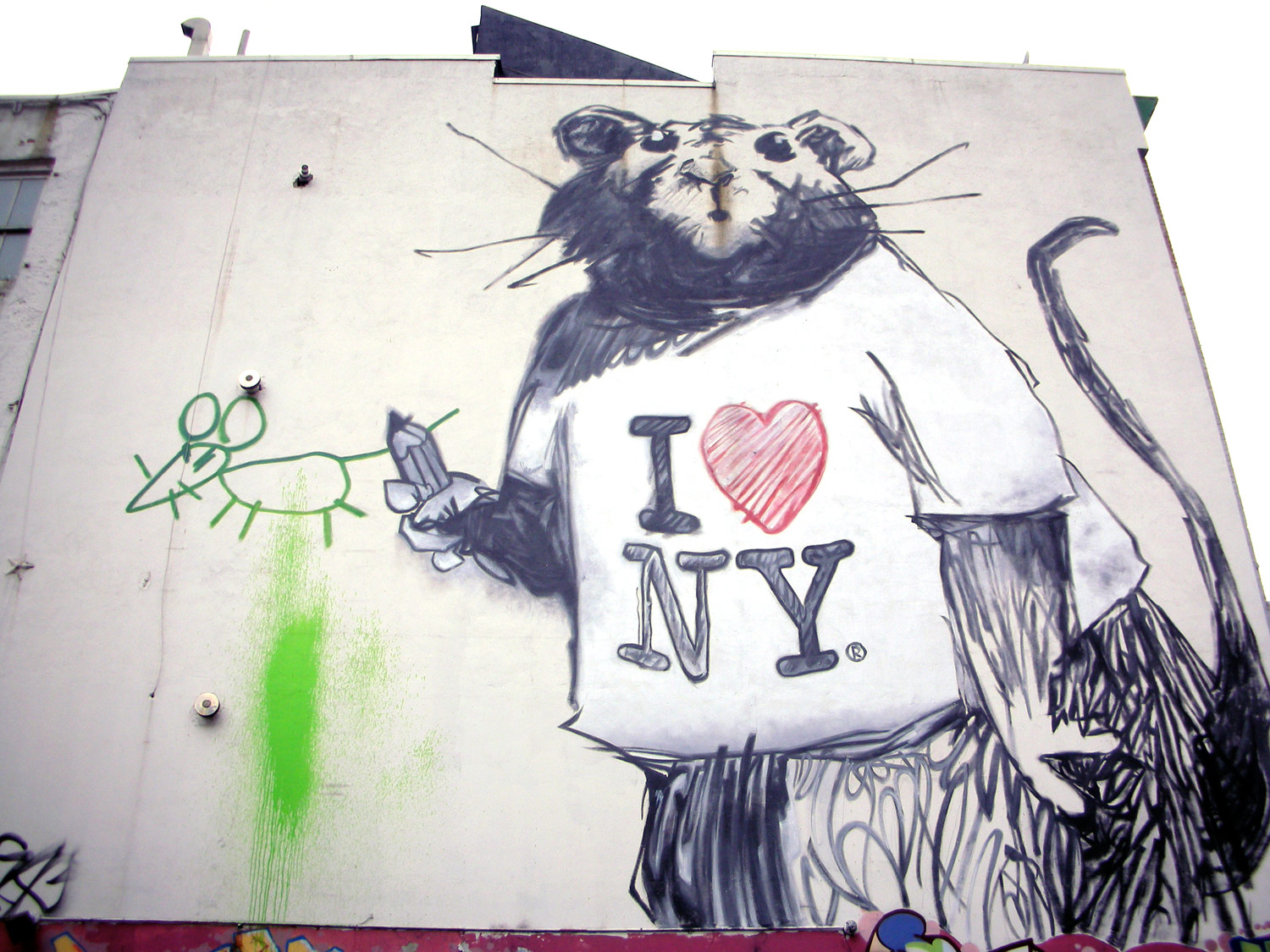 Banksy mural at Wooster and Grand St., via The World’s Best Ever

This entry was posted on Friday, October 3rd, 2008 at 4:42 pm and is filed under Art News. You can follow any responses to this entry through the RSS 2.0 feed. You can leave a response, or trackback from your own site.