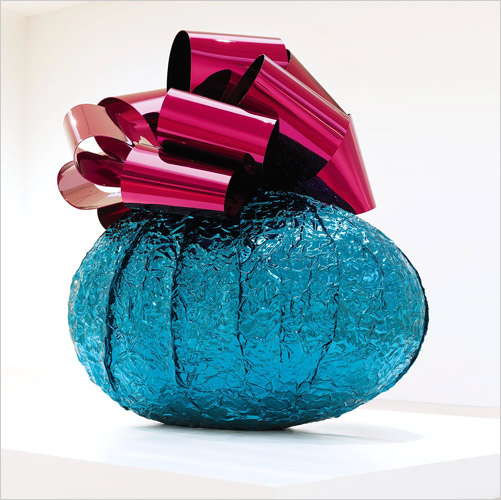 The spring Post-War and Contemporary Art auctions take place this week in New York at Sotheby’s tonight, Christie’s tomorrow night, and Phillips de Pury on Thursday night. Last week’s Impressionist and Modern Art auctions, covered by AO here, and also here, brought in far less than a year ago, but considering the economic climate were viewed as middling successes (aside from Sotheby’s spectacular Picasso and Giacometti flops).  However, the contemporary sales will be more of a litmus test for a chastened market.  After years of record-setting sales, this year all three auction houses have reined in the estimates, no longer providing the guarantees to sellers that burned them last fall.

Sotheby’s is offering 49 lots, with total estimates of $52–72.2 million, compared to the $362 million it brought in last spring. Highlights include an untitled painting by Martin Kippenberger of a fat man with balloons and Jeff Koons’s ‘Baroque Egg with Bow (Turquiose/Magenta),’ part of the artist’s ‘Celebration’ series, which includes ‘Hanging Heart,’ a sculpture that set the record for a living artist at auction in the fall of 2007. While ‘Hanging Heart’ sold for $23.6 million, ‘Baroque Egg with Bow (Turquiose/Magenta)’is expected to sell for $6-8 million.  Christie’s is offering 54 lots, with total estimates of $71.5–104.5 million.  On the catalog cover is Jean-Michel Basquiat’s ‘Mater,’ a rare occurrence of a female figure within Basquiat’s oeuvre, expected to sell for $5-7 million. A number of works from the collection of Betty Freeman are also up for auction, including David Hockney’s portrait of the philanthropist in her home, ‘Beverly Hills Housewife,’ estimated to go for $6-10 million.  Lastly, Phillips de Pury & Company is offering 43 lots, with estimates of $12.2–17 million. Highlights from that sale include a Robert Gober sculpture of a Farina cereal box, estimated at $2.5-3.5 million, and a late, figurative painting by Philip Guston, estimated at $1-1.5 million.

The sales also include a number of Minimalist works by artists such as Dan Flavin, Donald Judd, Sol Lewitt, and Agnes Martin.  Many experts view these works as under-priced, and present more in museum collections than private collections.  This round of sales sees fewer works by the Pop artists that made headlines in the boom times like Warhol and Rauschenberg.

This entry was posted on Tuesday, May 12th, 2009 at 8:03 am and is filed under Auction Results. You can follow any responses to this entry through the RSS 2.0 feed. You can leave a response, or trackback from your own site.