6 works, 6 rooms is an installation that currently occupies two of David  Zwirner’s gallery spaces. The amount of space that the show affords each work allows for novel consideration of each individual piece and the movements, Conceptualism and Minimalism, to which the works are attributed. The exhibition features the work of Dan Flavin, On Kowara, Sol LeWitt, John McCracken, Fred Sandback and Richard Serra.

Dan Flavin, Monument 4 for those who have been killed in ambush, 1966. Via David Zwirner Gallery.

The works exhibited mark a point in art when artists became disillusioned with attempts at illusion. Emphasis was placed on simple communication of concept via clean aesthetics. The exhibition, that features pioneering Minimal And Conceptual works, is of itself conceptual. Each piece is installed within an individual room of the gallery space. Upon entering the gallery one is most likely to come across LeWitt’s piece first. 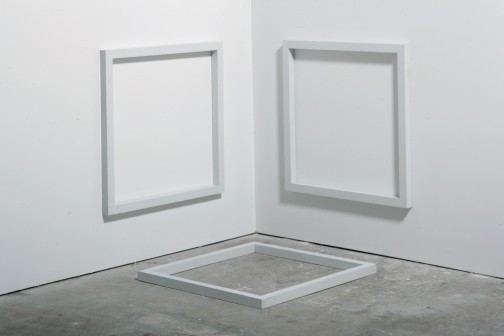 LeWitt’s interest in cubes, and the components of these simple units, began in the 60’s and was the driving force behind most of his early sculptures. For Three Squares, three identical steel squares are installed in the corner of the gallery. The actual squares and their implied inverses make a white cube. The piece relies on the white cube of the exhibition space to form the white cube that is omnipresent in Lewitt’s early works.

Richard Serra’s Corner Prop also relies heavily on the gallery space. The piece consists of a lead cube that is propped up against the gallery wall by way of a rolled steel pipe. In the next room, inhabiting yet another corner is Dan Flavin’s Monument 4 for those who have been killed in ambush. Dan Flavin’s works benefit greatly from being exhibited in a isolated area.  A properly dimmed room allows for the fluorescent lighting to fill the room. The work consists of 6′ and 8′ foot lengths of red fluorescent bulbs and bathes the entire room in the light from said bulbs. 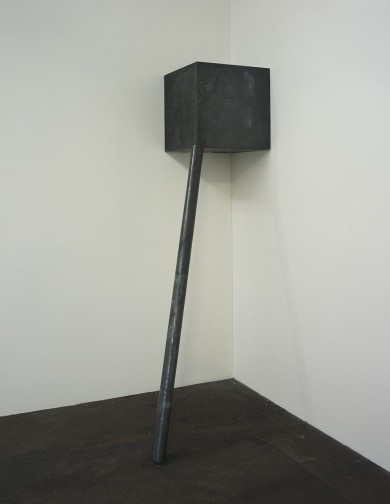 Walking to the adjacent gallery space one is confronted with a diminutive piece by On Kowara.  June 19, 1967, forces the viewer to consider the passage of time by confronting them with a painting whose only content is the date of its production. Pieces from On Kowara’s Today Series are meditative and methodical: he only produced the pieces in standardized canvas sizes and with white lettering silhouetted against a monochrome background.

John McCracken’s Swift has a particularly interesting existence in a void space. A mirrored rectangular sculpture meant to reflect its surroundings when placed in an empty room plays with the objects visibility. Fred Sandback’s pieces are most always installed in vacant rooms because of the delicate medium, yarn, and the space needed for proper installation. For Untitled (Sculptural Study, Five Part Construction) black acrylic yarn is hung and stretched in respect to the dimensions of the space to create 4 rectangles and one square. 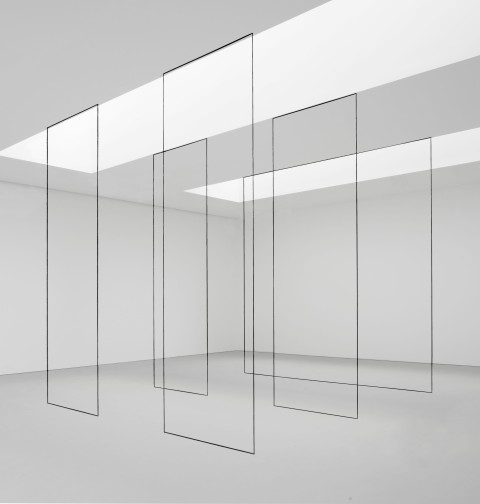 The sparse exhibition is reflective of the works and allows the work to take on new meaning as each occupies and reflects upon space differently. 6 works, 6 rooms will be on view through August 14th, 2009 at David Zwirner Gallery located at 525/533 West 19th Street New York, NY.

This entry was posted on Monday, July 20th, 2009 at 9:11 am and is filed under Go See. You can follow any responses to this entry through the RSS 2.0 feed. You can leave a response, or trackback from your own site.