In this exhibition, Muñoz worked to break the divisions between sculpture and other media, a theme evident in One Figure, which melds sculpture and installation art. The show as a whole ranges in medium from drawing and sculpture to sound and radio.

Juan Muñoz, One Figure, courtesy of the Museum.

Juan Muñoz, Many Times, courtesy of the gallery.

Juan Muñoz, Ventriloquist Looking at a Double Interior, courtesy of the gallery.

Born in Madrid, Juan Muñoz studied at the Central School of Art and Design and Croydon College, both in London, and at the Patt Graphic Center in New York.  This show is his second at MNCARS, following an exhibition in 1996.  A recipient of the National Plastic Arts Award in 2000, Muñoz showed three times at the Marian Goodman Gallery in New York, which represented him, and had other solo exhibitions at Dia Center for the Arts, New York; the Irish Museum of American Art in Dublin; Musée de Grenoble; and more.  Muñoz died at 48, two months after he became the first Spanish artist to show in Turbine Hall at Tate Modern – and just before the first major American retrospective of his art opened at the Hirshhorn Museum in Washington.

Juan Muñoz, Sara with Mirror, courtesy of the Museum. 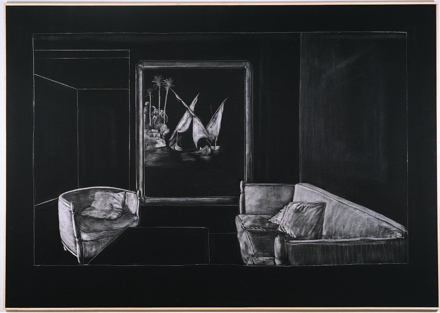 This entry was posted on Saturday, August 8th, 2009 at 12:04 pm and is filed under Go See. You can follow any responses to this entry through the RSS 2.0 feed. You can leave a response, or trackback from your own site.