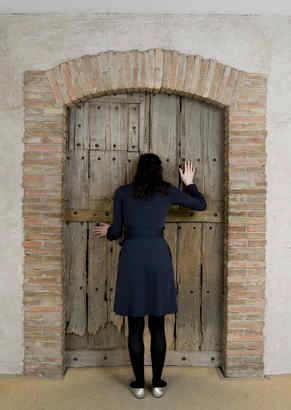 A visitor looks through two holes in a wooden door to Étant donnés, the Marcel Duchamp masterpiece behind it and the subject of a new show at the Philadelphia Museum of Art. Image via the Philadelphia Inquirer.

Through November 29, 2009, the Philadelphia Museum of Art is showing works by the late master Marcel Duchamp. Almost 100 works of art related to the artist’s Étant donnés are featured in this celebration of the 40th anniversary of the piece’s unveiling at the Museum, which has hosted it since 1969. Drawn mostly from the museum’s holdings, the show also includes works on loan from public and private holdings in Germany, Israel, France, Sweden, and the United States.

Interior view of Marcel Duchamp’s Étant donnés, at the Philadelphia Museum of Art. Image via the Wall Street Journal.

According to the show’s curator and the Museum’s curator of modern art, Richard Taylor, the initial installation of Étant donnés in 1969 tripled the Museum’s attendance for that year, attracting crowds of people that spilled out into the hallways of the gallery and out through the front of the museum. The painter and printmaker Jasper Johns has called it “the strangest work of art any museum has ever had.”  More properly called Étant donnés: 1. La chute d’eau, 2. Le gaz d’éclairge (Given: 1. The Waterfall, 2. The Illuminating Glass), the installation can only be viewed by one person at a time, through two holes in a wooden door.   Duchamp developed this seminal work in almost complete secrecy between 1946 and 1966, leaving the completed piece in his studio when he died in 1968.  Étant donnés is now tucked away in a darkened corner of the PMA. Viewers, upon looking through the holes which are the gateway to the installation, are confronted by a crumbling brick wall immediately behind the door.  The first impression a visitor gets, though, is that of being almost assaulted by the nude in the foreground. The nude is largely based on casts of Brazilian sculptor Maria Martins, with whom Duchamp had a love affair between 1946 and 1951; its figure’s left hand is a cast of his wife’s, Alexina, whom the artist married four years after the conclusion of the Martins affair.  The woman crudely presents her visitors with ambiguous and misshapen genitals, her left hand holding an electric lamp and her face hidden by flowing blond hair, itself recalling the landscape in the background which has at its core a seemingly active waterfall.

Marcel Duchamp’s Moonlight on the Bay at Basswood, accompanying Étant donnés at the Philadelphia Museum of Art.

Marcel Duchamp, “Study for landscape backdrop of Étant donnés,” at the Philadelphia Museum of Art. Image via the Wall Street Journal. 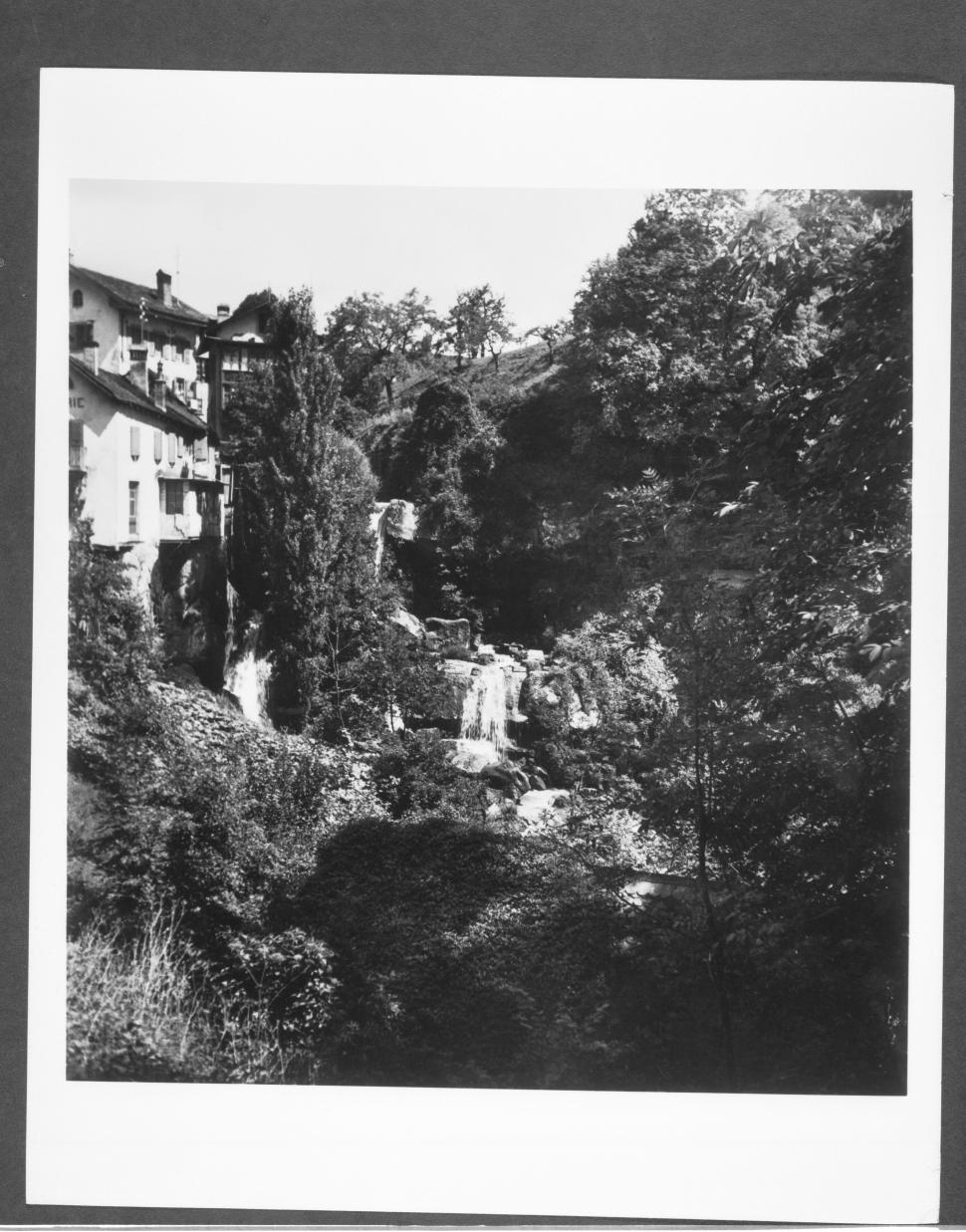 Marcel Duchamp, Swiss Landscape with Waterfall (I), accompanying Étant donnés at the Philadelphia Museum of Art. Image via SLOG.

A page from Marcel Duchamp’s “Manual of instructions for the assembly of Étant donnés…” which pertains to peephole logistics. Image courtesy of the Philadelphia Museum of Art.

The show, given the pieces it includes as they surround its crux, follows the production of Étant donnés. Taylor gives patrons a look at a drawing of Martins’s nude body, plaster casts of her limbs, parchment “skin” samples. The background landscape scene’s development is represented here with photographs of the land in Switzerland on which it was based, which were subsequently cut up and rearranged to lose an industrial skyline, before they were reprinted on cloth and colored with chalk and oil paint. An exhaustive stream of Polaroids documents methods of construction and dismantling, the clothespins that hold the waterfall’s machinations in place, the effort put into what is really a flimsy product. Despite — or because of — its construction, Étant donnés has offered its audience an individualized viewing experience, a mutilated mishmash of land and gender, complete with what may or not be a sardonically named “Illuminating Glass.”  In fact, the exhibition tellingly features another well-known, similarly erotic Duchamp construction, The Bride Stripped Bare by Her Bachelors, Even, or  The Large Glass.  The Bride Stripped Bare… and accompanying sketches emphasize a nature-technology dichotomy, with some sketches showing a single light-post and a mountainous landscape — especially telling in light of the torch in Étant donnés, held up as if to illuminate the nature background.   Finally, Philly plays in a room of the exhibition.  It is a video in which the late artist Hannah Wilke stripteases behind and through (literally and figuratively) The Bride Stripped Bare… At the video’s end, Wilke checkmates her companion in a game of chess.   She strips herself, and the audience waits for her.  She is not stripped by the male, in direct confrontation with the male dominance on which Duchamp comments in The Bride Stripped Bare… and erotic pieces like Two Nails, Sink Stopper, and Not a Shoe.

Marcel Duchamp, The Bridge Stripped Bare by Her Bachelors, Even (The Large Glass), at the Philadelphia Museum of Art.

Marcel Duchamp, Untitled, Left Arm, at the Philadelphia Museum of Art. Via the Wall Street Journal. 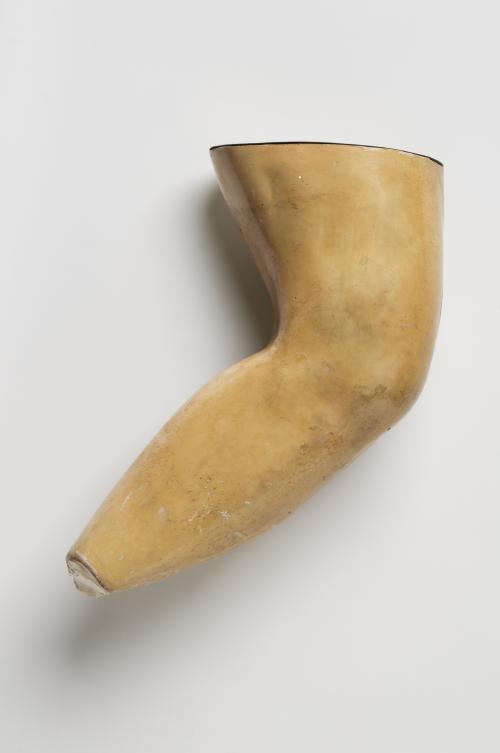 Marcel Duchamp, Untitled, Left Leg, at the Philadelphia Museum of Art. Via SLOG.

Above and below, individual pages from Marcel Duchamp’s “Manual of instructions for the assembly of Étant donnés….” that pertain to the nude. Images courtesy of the Philadelphia Museum of Art.

Born in 1887 in France, Marcel Duchamp is widely associated with the Dadaist art movement, which emerged after World War I.  He is famously known for Fountain (1917), art made of just a simple urinal, and the cubist masterpiece Nude Descending a Staircase, the latter of which is also at the PMA.  This exhibition of his works is co-sponsored by The Women’s Committee of the Philadelphia Museum of Art, The John and Lisa Pritzker Family Fund, and supported also by the generosity of Mr. and Mrs. Aaron M. Levine. The 448-page catalogue is enabled by The Andrew W. Mellon Fund for Scholarly Publications.

Below are individual pages from Marcel Duchamp’s “Manual of instructions for the assembly of Étant donnés….” All images courtesy of the Philadelphia Museum of Art.

This entry was posted on Sunday, September 6th, 2009 at 10:12 pm and is filed under AO On Site, Go See. You can follow any responses to this entry through the RSS 2.0 feed. You can leave a response, or trackback from your own site.