AO Interview: A discussion with Xavier Veilhan, French artist, whose work is currently on view at Château de Versailles 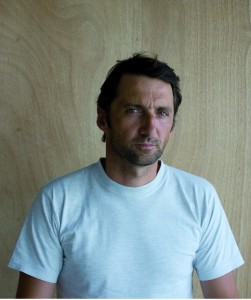 One of the most prominent French artists, Xavier Veilhan, created a site-specific show at Versailles to run through December 13, 2009. Recognized for his work that transcends disciplines and employs an array of mediums, Veilhan, unlike many contemporary artists, makes art historical references while maintaining his very own recognizable style. Oftentimes, it is in recreation of the archetypal that the French artist’s singularity is manifested.  Figures and forms rooted in the collective memory of art history seem to be stripped down in their physicality, yet the very act of reduction translates into a broader measure of proliferating rather than voiding, when it is directed towards the archetype.

Fascinated by modernity, Veilhan considers the notion in its historical expression: “after World Wars I and II, it is difficult to feel the same way that Boccioni did with the idea of modernity,”  explains the artist. Similarly, his interests while transcending the imposed boundaries of present disciplines, stay respectful and sensitive to the complexity of their past.

Manan Ter-Grigoryan for Art Observed: To jump right in, tell me how it all started for you. Not in Versailles, but your path as an artist?

Xavier Veilhan: I grew up in boring suburbs… and I saw that for a lot of art students there was a lot of art but also a lot of partying! (Laughs) It was a time of new radio, free radio; I worked a little bit in the radio. There was lot of traveling… I traveled to Germany, studied a little bit in art school. It was a very carefree time. I met a lot of people in those times… then I started to get more focused on visual arts and work with Pierre Huyghe and that’s when we started doing some shows. In 1989 I had my first solo show in Italy. It was important to use a kind of universal language for me, to be international. 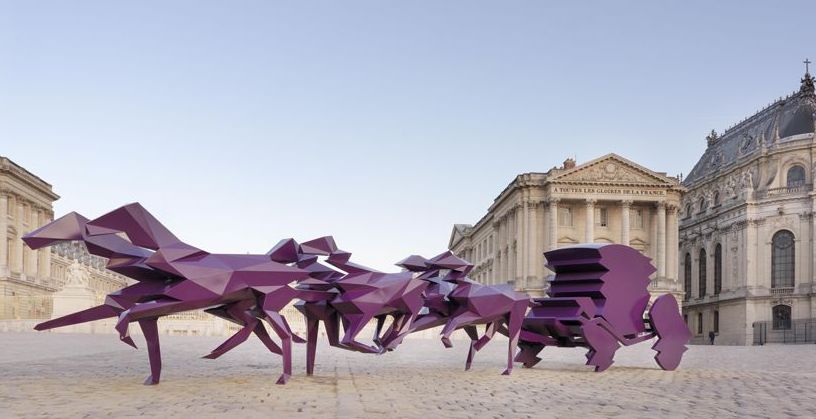 Interview and more images after the jump… 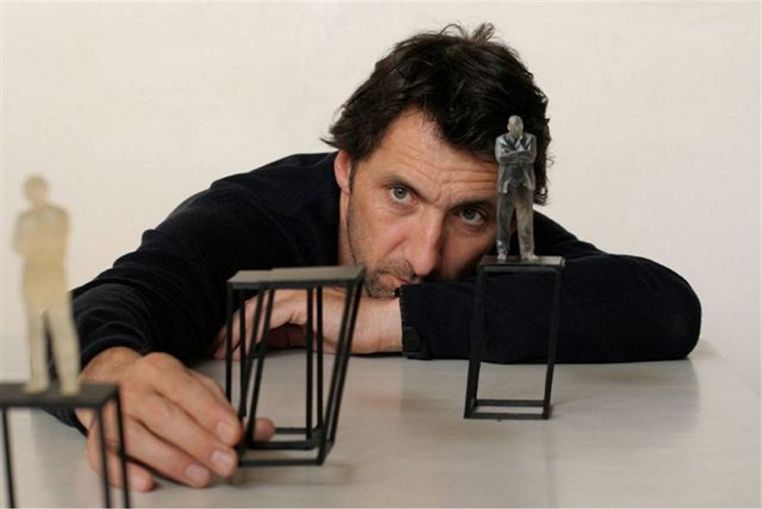 AO: How did you feel about presenting a show in Versailles, what were your first thoughts when you found out about it?

X.V.: I started to work on the show without knowing that it will grow in scale with Jeff  Koons setting the bar.  It was a huge controversy and the show both before and after it happened was major…

AO: What is your opinion on Jeff Koons?

X.V.: For a lot of artists of my generation Jeff Koons is very important because we have the same concern on doing something quite righteous, but with a pop theme. Not the normal avant-garde tradition. Jeff Koons is somebody that completely integrated Duchamp and Andy Warhol. His work is really important for me.

AO: Will you tell me a little bit about the geographic patterns you create with the show, because you are practically the curator of the Versailles show?

X.V.: My approach on shows in general is not to produce pieces, but to produce an experience of the show in the viewer’s mind. My starting point is the feeling of the memory that the viewer will have more than the actual object. I was always very interested in the history of “Exposition Universelle,” or any kind of show, even a non-art show.  The history of exhibition is very important to me and the show itself is more important than the elements that build it. Visiting an exhibition is like driving through a landscape with visual elements appearing; and what I like is to make a kind of dramatic compilation of those elements; they will reach the viewer’s mind.

AO: If we approach those elements in more detail… You talk about the complexity and ambiguity of color purple and say it is the color of the death of a king. But this is a Western connotation if not French. So what happens if the color is translated in a place like Versailles, which is a major tourist attraction globally? Do you welcome the kind of meaning that you may not have intended?

X.V.: History seems to be the only reason, but it’s not.  Someone has told me later that this is the color of the death of the king. So to me what is more important are some elements of ambiguity that are extreme: it is both an American Apparel color and if you walk the street you see this color around, but also a heavy historical color, related to the idea of noblesse.
Also, there is an ambiguity of the actual color because it is close to blue or red. The thing is that when you put two or three colors nobody asks you about it. When you do monochrome then people ask themselves “why this color?” I like people to ask themselves “why this?”.
There also is a very practical reason for purple, because I used color in many ways in different places and it worked in each different location, because it is kind of a complementary color.  It worked quite well in the surroundings of grey beige stone as a strange element.

AO: What about the spaces, since you used many transitional spaces, like staircases, courtyards?

X.V.: There are many reasons for this, as with color. The first reason, as I told you, is that I use the experience of the viewer as the raw material of thought influence and the development of the whole show. I wanted to enhance the poetic aspect of the open air spaces designed by Le Nôtre.  And in order to reach this, I thought it better to use spaces where there is a lot of air and maybe not the most crowded spaces. In the inside of the castle it is too heavy. When you are in the stairways or yard it’s more open, it’s more laid back. And there is also a very practical reason: not to use the busiest places.

AO: What is the relationship between photographic practice and your sculptural pieces?

X.V.: Well there are many renditions. First I use the scanning technique a little bit like a 3 dimensional photograph, but related to the original photography: back in 1870 when photography appeared, it was used for landscapes or monuments. But then, when the technique allowed it, people started to pose for photographs, and they had to pose for quite a while…. My models had to stand still for 45 minutes, which lets them get into a certain “their own” position. There is no psychology added from me. The second thing is the approach that tourists have to Versailles: going through the medium of photography. People are not looking at things, but taking pictures of them. And I am interested in this kind of delay.  You take a picture, especially at the numeric age, and it is not something you really saw, its not something that you will look at 10 years after, it is to look at when you are in the plane going back home. This kind of delay is what I am interested in.
All the kind of games that people are playing with photography, like posing, faking the sculpture, playing different 3 dimensional games… That I like a lot, because it is a kind of post visual and physical contact they have with the monument.

X.V.: While I was working on the show, in a very unexpected way, I slowly got more and more involved with space odyssey.  It has to do with the idea of power and space and how you explore new areas with art, garden art for example, exploring the space around you. And Gagarin was the first man that saw the earth from space, far from its natural environment, the Earth from space. Exploring space: be it astronomy or art, I love it… It is both a scientific and poetic approach.

AO: Are you knowingly influenced by any philosophers? Do you employ any ideas of philosophy?

X.V.: Actually, Bruno Latour, and philosophy linked to both scientific and social approach. And Slavoj Zizek.

X.V.: Ah really? (Laughs)
I don’t have the approach that a lot of people have: the separation between science dur and soft science? Mathematics on one hand and how do you say?

AO: Humanities on the other

X.V.: Exactly… I like Socrates and Plato you know…

AO: Back when there was no separation right?

I am reading a lot on mathematics of random, it’s quite interesting… You know, the periodic table also is interesting. Everything is on this sheet of paper it’s a list of everything; it’s a conceptual piece  (Laughs…) actually. That’s the kind of thing I like but don’t ask me why.

X.V.: [Laughs] Even elements that don’t disintegrate are all made out of smaller parts. Body made out of atoms for example that are much older than the body and will survive after the body. It’s beautiful.

AO: My astronomy teacher used to say we are all made out of stardust…

X.V.: That’s what makes it all so interesting if you think about the fact that your body will turn to something else. It’s very beautiful. Actually an interesting point is that nothing gets lost, everything is transforming: “Rien ne se perd, tout se transforme”
But that is not true because you do lose! You lose the shape. The main thing that you lose when you die is your shape, because body is transforming into something different.

AO: An article in Artforum compared your work to Boccioni, what do you think about it?

X.V.: When people see something in my work, I always say: “yes you are right.” Everybody brings something to the work. I want to try to go back to certain energies that Malevich and some of the artists like Futurist, Dadaists, Manet and Warhol…

AO: That’s a big array there…

X.V.: [Laughs] Yes! But after World Wars I and II it is difficult to feel the same way that Boccioni did with the idea of modernity. What I try to do is avoiding naivety. And knowing the history helps to go back to the ideas and the energy of modernity.

AO: Now I can’t stop the interview with those words, let me ask you a fun question: What’s your favorite color?

Xavier Veilhan via The Selby

This entry was posted on Thursday, October 8th, 2009 at 2:27 pm and is filed under Art News. You can follow any responses to this entry through the RSS 2.0 feed. You can leave a response, or trackback from your own site.

6 Responses to “AO Interview: A discussion with Xavier Veilhan, French artist, whose work is currently on view at Château de Versailles”