Large Vase of Flowers, Jeff Koons. Sold by Benedict Tashcen to Dominique Levy for $5,682,500. All images via Christie’s

Last night Christie’s, New York brought-in a total of $74,151,500 from the sale of 39 lots at their Post War & Contemporary sale. While this figure falls within the pre-sale estimate of $64 – 88 million, and an impressive 21 lots sold for over the $1million mark, the sum is still a strong step down in comparison to that acquired from last year’s Fall Contemporary Auction at Christie’s which brought in $113.6million for a 43 lot sale.  In the end, major marquee works went unsold.  After a remarkable Impressionist and Modern auction at Sotheby’s last week, rumors were flying that the Art Market was flourishing once again – however, it now appears that the art world may have spoken too soon. 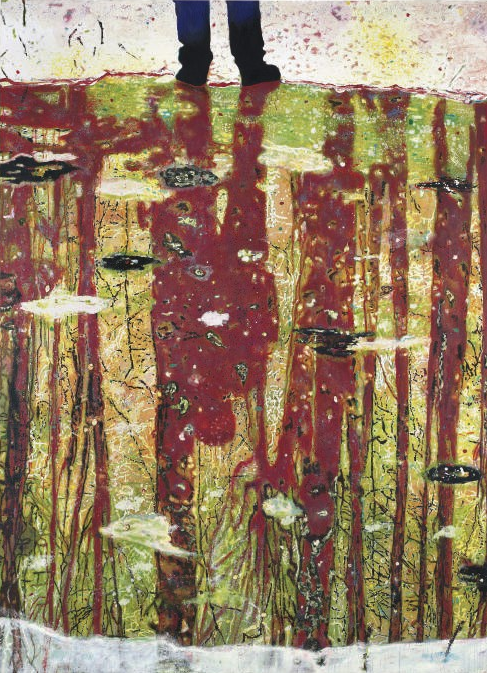 Reflection (What does your soul look like),Peter Doig

More text, images, video and related links after the jump….

Last week at Christie’s Impressionist and Modern Evening Sale the top lot, Tête de Femme by Picasso, went unsold. And while a high number of works sold last night brought in a high overall total, the two top-lots of the evening went unsold. Jean-Michel Basquiat‘s Brother Sausage, an enormous, 16ft wide cartoon strip-like painting composed of six panels hinged together to form a narrative frieze, was expected to fetch between $9 and 12 million – did not receive a single bid.  Brett Gorvy, International Co-Head of Christie’s Post-War and Contemporary Department, pondered that while the piece is undoubtedly one of Basquiat’s greatest paintings and of museum quality perhaps it piece was “too intellectual and too specific” to appeal to the broad commericial market. While this may be true, many argue that the piece was undesirable because it was simply too big and over-priced.

Similarly, the second to top lot of the evening, Andy Warhol‘s Tunafish Disaster, received no bids.  Amy Cappellazzo, Co-Head of Christie’s Post-War and Contemporary Department, suggested a reason for the lack of interest in the piece could be determined by its “niche” character and that it would only appeal to the “most seriously, hardcore Warhol fans.” An interesting occurrence is that tonight, rival auction house, Sotheby’s will offer a smaller Tunafish Disaster at their evening sale and is estimated to sell between $1.5 and 2 million.

While these top lots failed to sell, the sale estimate was kept high by a large number of the works selling much above estimate. Most notably was the top sale of the evening – Peter Doig‘s Relfection (What Does Your Soul Look Like), which brought in $10.1 million. The contest for the piece, observed by the Doig from the back row of the room, was incredibly heated between four bidders and was eventually sold to an anonymous telephone bidder with Jay Jopling as the underbidder.

Another highlight of the evening for the Christie’s team was sale of Andy Warhol’s portrait of Michael Jackson. One of a small group of Warhol silk-screened images of Jackson created in 1984, the estimate was high at $700,000 – the eventual price, $812,500 is almost three times what a similar piece sold for in May this year. While it is clear Jackson’s death greatly increased the value of the piece, Cappellazzo jokingly attributed the success of the sale to the piece portraying Jackson during his thriller period, “his best period.”

Another great strength of the evening were the six works from the Collection of John Cage and Merce Cunningham, all of which sold above or within pre-sale estimates – most notable was Jasper John’s Dancers on a Plane which sold for $4,338,500 almost double its pre-sale estimate. Another success from this collection was Philip Guston’s Untitled work on paper that sold at $542,500 – a new record price for the artist on paper. The geographical statistics relating the the whereabouts of buyers from this sale correlates greatly with the content of the works offered in this collection and indeed the rest of the sale. With the most popular works of the evening being from great American painters such as Alexander Calder, Donald Judd and Robert Motherwell, it is not suprising that 82% of buyers were American.

Tonight is Sotheby’s turn to auction their selection of Post-War and Contemporary works; ArtObserved will be on site to report and twitter all happenings as they happen on.

This entry was posted on Wednesday, November 11th, 2009 at 4:18 pm and is filed under AO On Site, Auction Results. You can follow any responses to this entry through the RSS 2.0 feed. You can leave a response, or trackback from your own site.