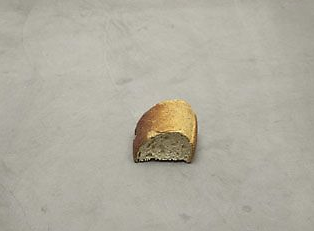 Now on view at Sadie Coles in London is Ugo Rondinone’s ‘Nude.’ The Swiss artist displays new sculptures from his ongoing ‘still.life.’ series. Objects such as tree trunks, walnuts, potatoes and other objects normally found in still-life paintings are cast in lead-filled bronze and displayed throughout the gallery. 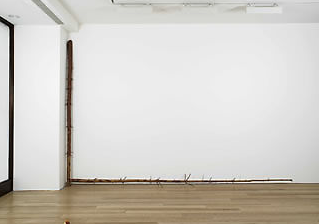 Rodinone’s minimalist arrangements refer back to the show’s title revealing subject matter that is stripped down to the bare minimum. The use of such perishable and simple items echos techniques employed by the Arte Povera movement during the 1960s. At the same time the artist seemingly plays on the idea of the ready-made by fabricating such objects in lead and bronze and situating them outside of their everyday context. 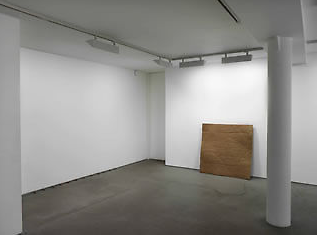 The pine tree sculptures elongate the gallery floor and wall almost as if they were architectural framework. The lines of potatoes and walnuts exude feelings of isolation and heaviness; they appear to be self-contained and weighed down in space. 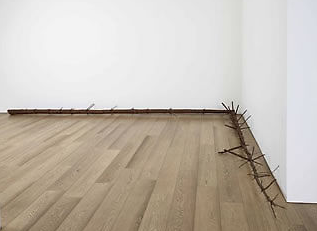 Pine Tree Laying in the Corner (2008) by Ugo Rondinone, via Sadie Coles

The objects seem to resist the passage of time; their lead-filled core constitutes a permanent stay toward any impending change.  The works express feelings of isolation and passivity often found in Rondinone’s art. 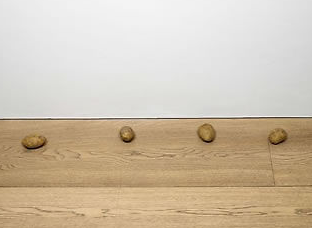 Four Small Potatoes in a Line (2009) by Ugo Rondinone, via Sadie Coles

Ugo Rondinone was born in 1964 and has exhibited in major international galleries and museums. Recent solo shows include the Festival of d’Automne in Paris (2009); the 2007 52nd International Art Biennale in Venice, Italy; Art on the Plaza in New York presented by Creative Time of New York in 2007; and at the Whitechapel Gallery in London in 2006. In 2007, Rondinone curated the exhibition The Third Mind at the Palais de Toyko in Paris. 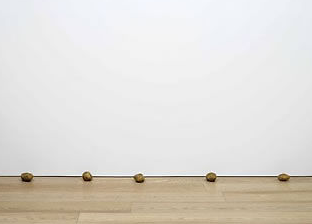 Five Big Potatoes in a Line (2009) by Ugo Rondinone, via Sadie Coles

The Buffalo News (Buffalo, NY) July 16, 2011 | Chuck Barney Usually right about now, the AMC cable network or what I like to call TV’s little art house — offers an exciting break from our summer doldrums with a new season of “Mad Men.” Unfortunately, that won’t happen this summer because protracted contract negotiations forced a delay in the Emmy-winning drama’s production schedule.

But at least we can take heart that AMC has another show almost as good as “Mad Men” ready to roll. Season Four of “Breaking Bad” launches at 10 p.m. Sunday and that is cause for celebration. in our site breaking bad cast

It’s also cause for some concern. Shows like “Breaking Bad” lug around an inherent problem as they age. With each season, the stakes need to be raised and the danger amplified for our main antihero — in this case, Walter White (Bryan Cranston), the chemistry teacher who cooks meth to support his family.

Simultaneously, the writers must find ways to keep said antihero interesting and appealing for viewers, even as he gets involved in darker and more heinous activities. It’s an extremely difficult high-wire act to pull off, and just a few missteps along the way can lead to something as ludicrously out of control as, say, “Weeds.” The good news for “Breaking Bad” fans is that, at least in the early going of Season Four, the show remains as addictive as ever. It picks up just moments after Season Three’s chilling cliffhanger, in which Walter appeared to be on the verge of being killed by Gus (Giancarlo Esposito), his drug-lord boss. go to website breaking bad cast

In a desperate attempt to preserve his life, Walt hatched a disturbing plan: Persuade his longtime sidekick, Jesse (Aaron Paul), to kill Gale, Walt’s lab assistant. Walt reasoned that, with Gale out of the picture, Gus would be forced to keep him (and Jesse) alive in order to keep the meth lab running.

In Sunday’s shocking, anxiety-ridden opener, Walt and Jesse grapple with the consequences of their actions, which clearly have affected their relationship. More than ever, Walter has distanced himself from that milquetoast persona of the past. Now, there’s no denying that he’s a hardened criminal. Jesse, meanwhile, seems to be in a detached state of shock. Whatever sense of innocence he clung to is now gone.

Much praise has been justifiably showered upon Cranston and Paul, who have four Emmys between them. They and the entire “Breaking Bad” cast continue to do fearless, electrifying work.

But for a moment, let’s turn some attention to the direction and cinematography, which fall under the guidance of creator/executive producer Vince Gilligan. I constantly marvel at the show’s artful camera work, carried out with a poet’s eye for detail. This visual verve, combined with a great sense of pace and timing, works to build the kind of unsettling mood reminiscent of “The Sopranos.” Just how long can the “Breaking Bad” gang keep this up? How long can they continue down such a treacherous path and make a show so grim, yet so riveting? The odds against them increase as time goes on, but here’s hoping that Walt and Jesse can keep things cooking for at least one more tension-filled season.

This entry was posted on Tuesday, November 17th, 2009 at 6:27 am and is filed under Go See. You can follow any responses to this entry through the RSS 2.0 feed. You can leave a response, or trackback from your own site.