On November 11, a comprehensive retrospective of Gordon Matta-Clark, (1943-1978) opened at The National Museum of Fine Arts of Santiago, Chile. The first Latin American tribute to the legacy of Matta-Clark, who rose to prominence in 1970’s with his site- specific artwork, the show was organized by the Museum of Fine Arts of Lima, Peru, and is curated by Gabriela Rangel, director of the Department of Visual Arts at Americas Society in New York. A legendary “anarchitect,” (a self-label Gordon-Matta created to describe his experiments with removal and relocation of parts of abandoned buildings) is a figure of a major artistic importance and statute in the United States, whose iconic status was recently established by an inclusive exhibition at the Whitney Museum of the American Art. The present show seeks to present to Latin American audiences Matta’s oeuvre of performance and recycling pieces, space and texture works, and “building cuts.” The works on display are on loan from Estate of Gordon Matta-Clark, Canadian Center of Architecture, and several New-York private collections. The exhibition attempts to present Matta-Clark’s work in its historic and social context that includes escalation of the Cold War, and New Formalism movements which dominated urban architecture in the United States since the early 1960’s and the artist’s critical response to these factors, which he viewed as major signs of general dehumanization of the society.  The exhibition features a number of Matta-Clark’s projects dedicated to the construction of “affordable and self-sustainable housing” for marginal social groups. The exhibition’s attendees were invited to participate in the re-creation of the artist’s 1971 project “Garbage Wall,” (photograph of the original project below),a construction erected by Matta-Clark under Brooklyn Bridge in New York using disposed objects of household to attract the authorities’ attention to the living conditions of the less affluent New Yorkers.  The “Garbage Wall” constructed by the visitors is on view in the Museum’ Central Hall. 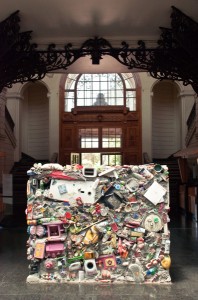 The centerpiece of the exhibition is a series of photographs and short films of Matta-Clark “building cuts,” including the iconic 1974 “Splitting,”(shown above) a photograph of a house in Bronx, New York that the artist cut with a power saw to comment on the decay of the American city.  Of particular interest are photographs Bingo (shown below), 1974, a case of literal deconstruction, where the artist removed a facade of a house in Love Canal, a notorious neighborhood in Niagara Falls, New York, where  21,000 tons of toxic waste where discovered, leading to public health emergency and an urban planning scandal.  On display are also several artists’ statements by Matta-Clark and his letters reflecting the ruminations on the essence of space and time.

Born in New York in 1943 into a family of artists Anne Clark and Chilean Surrealist Roberto Matta, Gordon Matta-Clark graduated from Cornell University where he studied architecture.  During his studies at Cornell, Matta-Clark became influenced by Colin Rowe, an architectural historian, theoretician and teacher, whose views on urban planning became a major influential force in the second half of the twentieth century. In 1968, Matta-Clark relocated to Paris to study French literature at the Sorbonne. There, he witnessed the revolts of May 1968, the event of enormous political and social significance in contemporary history that left a lasting impression on the young artist. It was in Paris where Matta-Clark became aware of the philosophical movement of Deconstructivism, with its innovative concept of détournement, the re-use of artistic elements in the new ensemble. Moving to New York in 1971, Matta-Clark co-founded Food, a unique restaurant that was managed and stuffed by exclusively by artists. The restaurant’s menu celebrated unorthodox cuisine and each meal was tuned into an artistic event.  Located in SoHo, Food was the meeting place of Philip Glass Ensemble,Mabou Mines, and the dancers of Grand Union. In 1975, Gordon Matta-Clark produced a piece titled Conical Intersect, for which he cut a large conical hole through two 17th Century townhouses located in the historic Parisian district of Les Hales that was about to be demolished in order to construct the then-controversial Georges Pompidou’s Center. The Making of Conical Intersect, 1975 The exhibition features Window Blow-Out (1976), a project documenting the broken window panes of the Institute of Architecture and Urbanism in New York, the expression of Matta-Clark’s protest against the institutionalizing, and, thus, the decrease of artistic value of architecture, and Day‘s End (Pier 52), 1975, the artist’s attempt to create a modern temple by creating an arch-shaped cut in one of the abandoned piers in Manhattan. This entry was posted on Saturday, December 19th, 2009 at 3:47 pm and is filed under Go See. You can follow any responses to this entry through the RSS 2.0 feed. You can leave a response, or trackback from your own site.