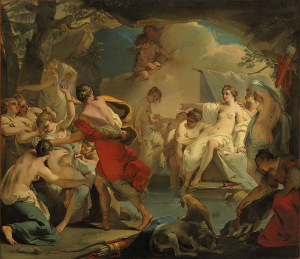 After the success of London’s ‘Old Master Week’ that took place in December 2009, expectations were high for the Old Master auctions that took place this week at Sotheby’s and Christie’s in New York. While perhaps not as rousing as the sales in London, the Old Master auctions in New York marked the first opportunity to verify suspicions that buyers were returning to the art market with confidence. Christie’s two days of sales included the two-part auction of Old Master & 19th Century Paintings, Drawings & Watercolors on Wednesday and a special private collection sale, A Cabinet of Curiosities: Selections from the Peter Tillou Collections on Thursday, achieved a combined total of $40,858,500. While these auctions were successful, the auction that led the week was Thursday’s sale of Important Old Master Paintings and Sculpture at Sotheby’s, which brought $61,599,250 – twelve lots sold for more than $1 million, and almost 60% of the works sold brought prices above the high estimate.

The first auction of Old Master Week was Christie’s sale of Old Master & 19th Century Paintings, Drawings & Watercolors on Wednesday, January 27 that fetched a total of $27.5 million. In total, eight paintings sold above the $1 million mark, including The entry of the animals into Noah’s ark by Jan Brueghel II which sold for $2,882,500 – the 2nd highest price at auction for the artist, and The Four Elements: Fire, Water, Earth and Air, a series of four oils on panel by Jan Breughel II and Frans Francken II, which sold for $2,210,500.

The top lot of the sales, The entrance to the Turkish Garden Café by Louis Léopold Boilly (1761-1845) was acquired by the J. Paul Getty Museum for $4,562,500, setting a new world auction record for a work by the artist. In announcing this important acquisition, Museum Director Michael Brand heralded the work as “one of Boilly’s greatest paintings, and a brilliant addition to the museum’s collection.”

Other highlights of the sale were two paintings that also fetched world record prices. One was a new record for Gaetano Gandolfi whose Diana and Callisto fetched $4.11 million – greatly exceeding the pre-sale estimate of $800,000 – $1,200,000. 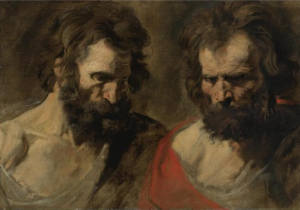 The top lot at Sotheby’s Thursday sale of Important Old Master Paintings and Sculpture was was Sir Anthony Van Dyck’s Two Studies of a Bearded Man which sold for $7,250,500 (estimate $5-7 million). The picture was painted by the young Sir Anthony Van Dyck when he was still in Rubens’s studio and shows how fully the artist absorbed the lessons of his master, as well as how soon he had begun to assert his own style.

A pre-sale favourite was Jupiter and Antiope by Hendrick Goltzius which sold to an anonymous telephone bidder – the only bidder -for a record $6,802,500. Despite falling short of its pre-sale estimate of $8–12 million, the final price was significantly higher than the previous record for a work by Goltzius of $1,542,500 that was reached in 1996, when The Fall of Man made at Christie’s New York. Goltzius, an artist most famous for his engravings came to painting late in his life – he produced just over 50 pictures. These paintings rarely appear on the market, hence the $8 million to $12 million estimate.

Another highlight was the sale of the much-talked about portrait of a woman made famous because it is not by Leonardo da Vinci. The painting sold for $1.5 million – triple the high estimate of $500,000. A reason valid reason for this extremely high price tag for a painting by an unknown came from George Wachter, co-chairman of Sotheby’s old master paintings department worldwide, who told the New York Times, that Leonardo was “such a potent name that there are people who want to touch anything that has to do with him.” 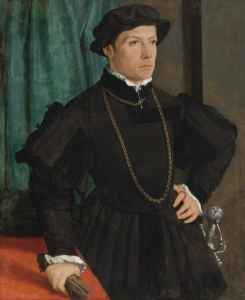 Sixteen works sold by the Los Angeles County Museum of Art as part of an effort to reshape its collection and pay for two 17th-century paintings. The collection brought a total of $3.8 million, far exceeding the collective pre-sale estimate of $1.2 – 1.7 million. Leading the prices achieved by works from the museum’s collection was Christoph Amberger’s Portrait of Hans Jakob Fugger, which climbed to $1,202,500.

Friday morning’s single-owner sale at Sotheby’s of Important European Terracotta and Bronze Sculpture from the Arthur M. Sackler Collections totaled $6,826,067, outpacing the $3.6/5.3 million presale estimate. The top price of the morning was achieved by a pair of bronze figures of Apostles Peter and Paul dated circa 1600 and attributed to Tiziano Aspetti, which sold for $542,500. Museum participation in the sale was strong, with at least two top American institutions buying in the sale, and the Musée du Louvre securing Joseph Chinard’s seductive terracotta sculpture of Phryne Emerging from her Bath, circa 1784-1787, which sold for $482,500.

This entry was posted on Saturday, January 30th, 2010 at 7:58 pm and is filed under Art News, Auction Results. You can follow any responses to this entry through the RSS 2.0 feed. You can leave a response, or trackback from your own site.