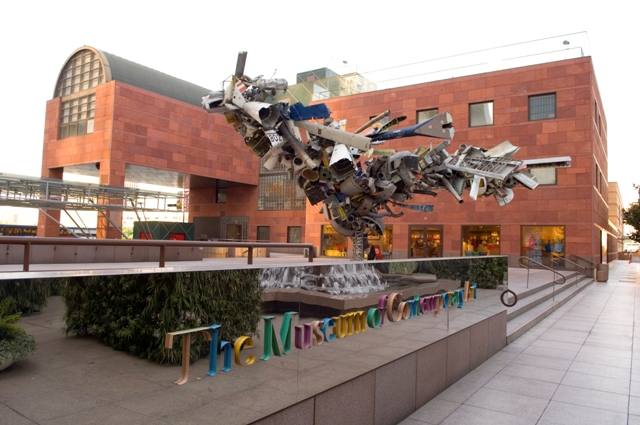 The Museum of Contemporary Art in Los Angeles. Via MOCA

Ending a week of speculation, Jeffrey Deitch has been named the new director of the Museum of Contemporary Art in LA– becoming the only art dealer and commercial gallery owner to take on the leadership of a major American museum. The decision marks a kind of turning point from the more traditional approach whereby museums draw their directors from pools of established curators or academics. Deitch stated this afternoon that “(…) it’s my goal to position MOCA as the most innovative and influential contemporary art museum in the world.  I am excited by the opportunity to play a role in making MOCA and Los Angeles the leading contemporary art destination.” Founded in 1979, MOCA occupies two buildings in downtown LA and is renown for its collection which includes around 6,000 pieces of international artwork produced in the past 70 years. Jeffrey Deitch, 57, founded his own gallery, Deitch Projects LLC, in 1996 and operates from three different spaces–two in Soho and one in Long Island City. Known for having experimental projects and programs in his galleries–sometimes crossing over into music, theater and other disciplines– Dietch started his career as a Citi Group Vice President, where he developed an art advisory and art financing business. “He will cease to be involved with any commercial activity by June 1st,” MOCA’s Director of Communications, Lyn Winter, has stated (Bloomberg).

Jeffrey Deitch, the new director of MOCA. Via LATimes

The release of Deitch’s appointment included a congratulatory statement from Michael Govan–  his new ‘crosstown’ partner, the director of the Los Angeles County Museum of Art, who stated “Jeffrey Deitch has been a very creative and visible force in the contemporary art world for decades. He has always had an interest in the not-for-profit aspect of his art activites. With both strong intellectual interests and pragmatic business and education expertise, he is a welcome addition to the growing art scene in Los Angeles.”

Deitch replaces Charles Young, who was named MOCA’s Chief executive officer in December 2008 after the resignation of Director Jeremy Strick, which happened amid the financial crisis. Strick was MOCA’s director for ten years and under his time,  the museum recieved consistent acclaim for its exhibitions, yet fell around $2 million a year short, on average, of balancing it’s budget. “It’s not a toxic job, but it’s going to be an uphill battle,” said Brett Littman, the executive director of New York’s non-profit Drawing Center. “It’s always better to come in at a low-point, since whatever you do looks like an improvement (Bloomberg).”

While the economic downturn did wreak major havoc on the museum’s financial stability–(MOCA spent down a $38 million dollar endowment to keep funding operations and had no reserves left to withstand the September 2008 crash)–a $30 million bailout offer from billionaire art collector Eli Broad was accepted in 2009, along with another $34 million in donations and pledges, aided by emergency fund-raising.

MOCA will officially present Deitch at a conference tomorrow, Tuesday at 10:30 am. Selma Holo, director USC’s Fisher Museum of Art, commented on the new appointment, stating, “I think that the news out of MOCA is, frankly, stunning. Deitch has done amazing work as an extremely innovative art dealer. At the same time, we would be remiss not to ask ourselves how he and MOCA are planning to make the transition from the world of commerce and its values to another universe. One understands that these worlds blend, but there are still or should be some lines that are not crossed (LATimes).”

MOCA did highlight Deitch’s past curatorial achievements, perhaps helping to counteract the aforementioned concerns. His curatorial experience has included “Lives,” a 1975 exhibition about artists who use their own lives as an art medium, numerous contemporary art shows for Greek collector Dakis Joannou’s Deste Foundation in Athens and “Form Follows Fiction” at the Castello di Rivoli in Torino, Italy in 2001.

SYSTEM TAKES SOME PAIN OUT OF TICKETS.(News)

The Los Angeles Superior Court has expanded its telephone interactive system to include Santa Clarita, allowing those who are issued citations to bypass long lines at the courthouse and pay over the phone.

“Instead of coming into the courthouse to do basic things, they can do all that now through the payment system,” said Bernadette Duncan, Los Angeles Superior Court traffic administrator. “You can do it from your home rather than standing in line.” Anyone issued a traffic citation assigned to Santa Clarita can call the courthouse to pay the fine, sign up for traffic school or speak with an operator about a lost ticket, trial request, a court appearance or general information. The program was also expanded to include Beverly Hills, Culver City, East Los Angeles, Malibu and Santa Monica. go to website superior court traffic

Not including the expanded cities, the system is processing about 18,000 calls a month, Duncan said. But because most of the calls are handled by the automated system, there isn’t a long waiting period to speak to an operator. see here superior court traffic

Tickets can also be processed by accessing the courthouse’s Web site at www.lasuperiorcourt.org.

This entry was posted on Monday, January 11th, 2010 at 5:55 pm and is filed under Art News. You can follow any responses to this entry through the RSS 2.0 feed. You can leave a response, or trackback from your own site.