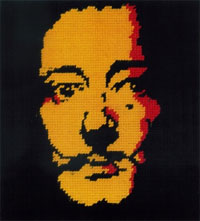 With only two weeks left in the exhibition, all of Stockholm was out to see “Dalí Dalí featuring Francesco Vezzoli” at Moderna Museet. The exhibition presents a retrospective of Salvador Dali, as well as his influence on contemporary artist Francesco Vezzoli. According to the exhibition’ curator, John Peter Nilsson, the show “examines the role of the artist in today’s celebrity-obsessed society, and of these two artists’ disingenuous relationship with mass media and power.” At once, it puts Dali’s oeuvre in a contemporary context and creates a historical perspective through which Vezzoli’s work may be understood.

for more story and relevant links after the jump…

Salvador Dali, born in 1903 in Figueres, Spain, is one of art history’s more eccentric characters. Dali who counted amongst his friends Marcel Duchamp, Andre Breton, Rene Magritte, and Max Ernst,  was an important figure in the founding of the Surrealist movement and an influential predecessor to pop art of the 1960’s.

The show begins in the museum’s lobby, where three plastic lip-shaped couches surround a TV and spinning disco ball. A sensationalist wall quotation announces, “‘I believe in general in death but in the death of Salvador Dali absolutely not.’ – Salvador Dali, 1958.” On the screen, Vezzoli describes the reason for his obsession with Dali– the first celebrity artist– and why he is so excited to show in the Moderna Museet: it is a museum of integrity, and in his opinion, unlike many other modern art museums, still modern.

As one exits this plush environment into the first room of the exhibition, a stark contrast awaits. The first room presents a typical retrospective: Dali’s seminal surrealist paintings mounted on white walls and whimsical sculptures encased in glass vitrines. Fifty delicate sketches encompass one wall. 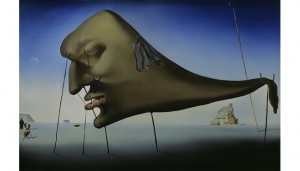 In “Sleep” (1937) one sees a desert landscape and a man’s face stretched out, resting on pins– an image Vezzoli later appropriates. The viewer is then given the choice of three sets of double-doors through which to continue their journey– but one set, a metaphor for the unattainable, is locked.

Each entrance to the second area of the exhibition brings the viewer into a less austere, more luxe exhibition area. Tan walls, a purple carpet (purple being a favorite color of the Surrealists), and dressing-room-style lighting guide the visitor through photographs and videos portraying Dali’s celebrity persona. The photographs, by Philippe Halsman, portray Dali as an eccentric: Dali with an eye patch, Dali spearing money with his mustache, Dali surrounded by flying cats. A video highlights the artist’s obsession with his styled mustache. As the double title suggests, the viewer is introduced to the dichotomy between Dali the painter and Dali the celebrity. 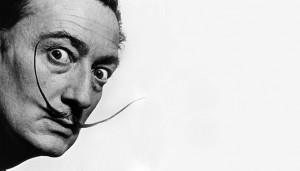 The exhibition also presents a side of the artist not many know, that of Dali’s interest in commercial design. In addition to the artist’s own newspaper, the Dali News, which announces his forthcoming projects and collaborations, he designed jewelry, perfume bottles, lobster phones, and, at the request of close friend Marcel Duchamp, a chessboard with pawns modeled after Dali’s own fingers. He painted three separate covers for Vogue in the 1930s and -40s, and in 1969 he designed posters for the Eurovision Song Contest.

US-BUSH-WORLD OF SPIN WASHINGTON _ In a White House full of Bush loyalists, none was more loyal than Scott McClellan, the bland press secretary who spread the company line for all the government to follow each day. His word, it turns out, was worthless, his confessional memoir a glimpse into Washington’s world of spin and even outright deception. By White House Correspondent Terence Hunt. AP Photos WX203, WX202, WX201.

US-ELECTIONS WASHINGTON _ Barack Obama took on Republican rival John McCain on the veteran Arizona senator’s western U.S. turf, as he picked up some fresh support heading into a primary that could finally put him over the edge for the Democratic nomination. AP Photos AZJC115, MTEA104, NVJH105.

WITH: PUERTO RICO-PRIMARY CLINTON US-MCCAIN-BUSH-NUCLEAR WASHINGTON _ John McCain’s nuclear proposals are largely in line with those of the unpopular President George W. Bush, despite what appeared to be recent attempts by the Republican presidential candidate to distance himself from the White House on the topic. By Military Writer Robert Burns. AP Photos AZCD210, AZJC118, AZJC117, NVJC112, NVJC107.

US-LESBIAN INSEMINATION SAN FRANCISCO _ Guadalupe Benitez claims that after being treated with fertility drugs for nearly a year, her Christian doctors refused to inseminate her because she is a lesbian. California’s highest court is considering whether doctors’ religious beliefs give them the right to withhold medical treatment from lesbians and gay men, a group specifically protected under state anti-discrimination laws. By Lisa Leff.

UN-IRAN-NUCLEAR UNITED NATIONS _ Iran insisted that the International Atomic Energy Agency must now deal with its nuclear program in a “routine manner” because it resolved six outstanding issues and the U.N. nuclear watchdog says the program is peaceful. By Edith M. Lederer. go to website ny gay marriage

US-MIDEAST-DEAD PEACE DEAL WASHINGTON _ If Israeli Prime Minister Ehud Olmert has been done in by a corruption scandal, so is President George W. Bush’s effort to broker a Mideast peace deal by the time he leaves office in January. By Diplomatic Writer Anne Gearan.

GUANTANAMO-DISMISSAL MOTION SAN JUAN, Puerto Rico _ An Afghan detainee at Guantanamo Bay was the alleged victim of an abusive tactic meant to decrease his resistance to interrogation, a Pentagon-appointed defense attorney says in a motion to dismiss charges. By David McFadden.

ARGENTINA-DIRTY WAR BUENOS AIRES, Argentina _ DNA tests establish the identity of an Argentine woman taken from her parents during the country’s military dictatorship _ the 90th such child identified by a group of grandmothers searching for their missing relatives. By Mayra Pertossi.

US-YAHOO CARLSBAD, California _ Yahoo Inc. CEO Jerry Yang rejected the image of his company as “under siege,” telling conference goers that executives are rallying to streamline Yahoo’s offerings and make it more relevant to consumers and to advertisers. By Allison Hoffman.

MEASURE OF A NATION-THE MUSIC MINEFIELD NEW YORK (AP) _ “Happy Days Are Here Again” may have worked for FDR in 1932, but ever since President Reagan asserted in 1984 that Bruce Springsteen’s “Born in the USA” was a patriotic paean, both U.S. parties have revealed tin ears as they try to convey that they’re plugged into the same mass entertainment as their fellow Americans. And in doing so, they reveal the national temperament. By National Writer Ted Anthony. AP Graphic MEASURE LOGO.

This entry was posted on Monday, January 11th, 2010 at 2:46 pm and is filed under Go See. You can follow any responses to this entry through the RSS 2.0 feed. You can skip to the end and leave a response. Pinging is currently not allowed.