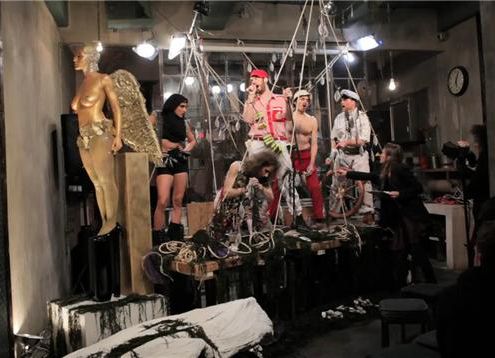 On Saturday, March 28, Biennialist Marianne Vitale brought together a group of writers, performers, poets, and thinkers to realize a collaborative artist cabaret – THE CLIPPER. The performance was presented by Kunstverein NY as part of YOU SHOULD HAVE BEEN THERE AN HOUR AGO – a monthly series that is guest-curated by performance artists, filmmakers, and writers that will be presented at White Slab Palace on the last Sunday of each month, from 6-8pm. The evening staged gallery-grade performance art angst, supported by a full, live jazz/rock ensemble.  Taking us back to the Seventies (1970, 1870 and 1770) on a mock ship stage, replete with ol’factory mood-setting dead fish decoration, the experience meshed nightclub glamarama with Musikverein-ish social opera via a Royal-Court-like contemporary art jestering.  Characters got interactive with seaweed tossing, singing sailors and a happy sea-woman, amidst a revolutionary who cleans up the conceptual act after a human clam unloaded salty water onto the crowd.  Screaming drunkards, lovers, a dancing drag, and a silent naked golden muse masthead paint a tableau of today – lambasting fraudulent eco-capitalism, problematizing political pirates, and debating and delighting in dead-end debauchery.  The troupe delivered the evening’s themes, both simple and complex, to an audience who each shared a moment of their own stardom for some part of the rough half hour. The occasional reading from the script on stage reminded viewers that this was a coordination of mostly performance artists deft in-the-moment energy.

More text, images and related links after the jump:

Aboard THE CLIPPER, Todd Colby captained the crew, while sea-woman Dina Seiden recited skate porn. With bulging forearms, singing sailor Michael Portnoy delivered a medley of blues, reggae, and 30’s show tunes before colliding with Somali pirate scholar Sandeep Bhuller. Brandon Olson appeared as a European Baroness on board a 1970’s yacht party (the wrong ship), amidst Walter Gambini intermittent updates on his mental state at sea. Josh Boyer played the oily, scantily clad, and armed (with water pistol) clam, which sprang surprisingly from its shell partway through the performance. The figurehead of the boat was designed by Jessica Mitrani.

The live score was provided by Pete Drungle on piano/ electronics, Tony Lewis on drums, and Al MacDowell on electric bass.

A little birdie told us:
Molly Spaulding of Narnia (cool vintage store on Rivington) did the costumes. Andrea Helgadottir did the make-up (Bjork’s make-up artist), Arturo Vidich (performance artist and Kunstverein NY curator) did the lighting, and the musicians: Pete Drungle, Tony Lewis, and Al MacDowell (all work with Ornette Coleman- were why the music was so phenomenal). 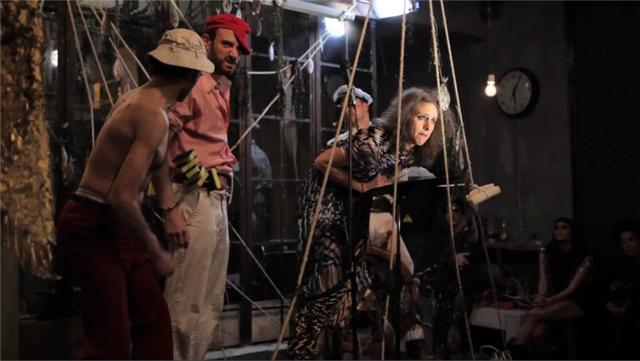 By Mass Communications Specialist 2nd Class (SW) Brian P. BillerNaval Special Warfare Public Affairs January marks the 45th anniversary of the inception of the Navy’s SEAL (Sea, Air, Land) Teams. From those early days of the SEALs, it has been the intense training and brother-like bond for their teammates that has forged the core of the Naval Special Warfare community. in our site navy seals training

Prior to 1962 there were forces in place that did some of the jobs performed by today’s SEALs, many whose roots and manpower were integral in the forming of the first teams.

“The SEALs officially came from the Underwater Demolition Teams (UDT),” according to Roger B. Clapp, Naval Special Warfare Command force historian. “But you can really trace the SEAL heritage back to the scouts and raiders and naval combat demolition units which were active only during World War II.” “They needed 100 volunteers for this demolition outfit,” said retired Lt. Joseph DiMartino, who found himself a 17-year-old seaman on the beaches of Normandy on June 6, 1944. DiMartino stayed in the community and eventually became one of the original members or ‘plank owners’ for SEAL Team Two.

“It was a lot of training, I mean we had a line of schools that we had to go through and they were fantastic,” he said. “Like Ft. Bragg special weapons – you know, all kind of foreign weapons, HALO (High Altitude Low Opening) parachuting.” Back in the early days, the SEALs technology was not as advanced as today.

“We had swim trunks, blue and gold shirts, coral shoes and a k-bar,” said retired Master Chief Boiler Technician (SEAL) Peter P. Slempa Jr., SEAL Team One plank owner. “The only weapon that was reliable in the surf was the .45 cal. ‘grease gun’.” Slempa also echoed the rigorous training schedule.

“The training pipeline was hectic,” he said. “We attended Army basic airborne at Ft. Benning, arctic survival with the Royal Canadian Air Force and jungle survival in Panama.” In addition, Slempa said they received Vietnamese language training and other training as it became available.

Slempa added that the caliber of personnel has not changed though.

“We were and are the best there is,” he said.

“A lot of people think we make SEALs here,” said Senior Chief Special Warfare Operator (SEAL) Daniel Gearhart, Basic Underwater Demolition / SEAL (BUD/S) 1st Phase Leading Chief Petty Officer. “We don’t. We find them. It’s like diamond mining, you gotta throw out a lot of dirt and you gotta dig through and get your hands dirty and find SEALs, because you don’t make them.” Gearhart is not the first member of his family to be a SEAL.

“I grew up around … all these guys back in the day that were running around my house that are legends in the frogman community now, guys that we all stand on their shoulders because of what they did,” said Gearhart. “I grew up around those guys and thought it was kind of neat and the lifestyle was attractive to me.” Twenty years later, Gearhart imparts his wisdom to new recruits, drawing from the chiefs and senior chiefs who were in Vietnam and trained him.

“The student has changed,” he said, “When I went through I was the norm. I was a young kid, didn’t really fit into the college mode, and didn’t really want to start a 9 to 5 – I wanted more. And now the young recruit that comes in usually has a college degree or some college. He’s a lot smarter. They ask a lot more questions, so the training has changed to meet what we need, but the rudimentary core elements of our training haven’t.” Gearhart added that while a lot of the training has evolved, it hasn’t necessarily changed, and while some of the specific missions for deployed SEALs may have changed, the overall mission has not. see here navy seals training

“We are, I think the first choice when it comes to hitting the target. I think battlefield commanders want SEALs to do the job and they wanted them back then because they were the best at it. They want them in Afghanistan and Iraq now because they’re going to get the job done,” he said.

When asked for the fondest memory that he was able to share, Gearhart unhesitatingly stated, “The day I got my Trident, absolutely.” Instructors like Gearhart ensure the strength of the SEAL community for many years to come. The men who laid that foundation still find themselves missing the action, even in their golden years.

This entry was posted on Wednesday, March 31st, 2010 at 5:28 pm and is filed under AO On Site. You can follow any responses to this entry through the RSS 2.0 feed. You can leave a response, or trackback from your own site.