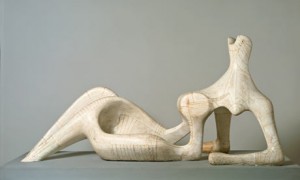 Reclining Figure (1951), by Henry Moore, via The Guardian

Currently on view at Tate Britain is an exhibition celebrating the work of renowned sculptor Henry Moore (1898-1986).  With a display of over 150 stone sculptures, wood carvings, sculptures, bronzes, and drawings, the show revisits the legendary works of one of the masters of twentieth century art.  The show attempts to emphasize the revolutionary in Moore. It highlights his fight to preserve the figurative tradition for three decades by challenging and yet incorporating  elements of abstraction. 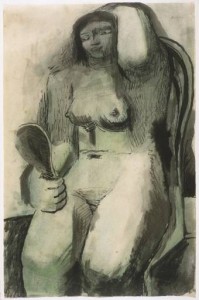 Seated Nude with Mirror (1924) by Henry Moore, via Tate Britain 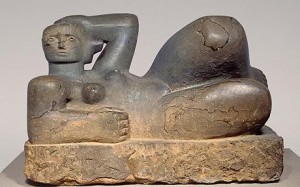 Reclining Figure (1929), by Henry Moore, via The Telegraph

Moore rebelled against his superiors’ traditional viewpoints of sculpture by deciding to carve directly into materials and taking influence from non-Western works he saw in museums. Tate Britain’s exhibition recapitulates the defining subjects of his work such as the reclining figure, mother and child, abstract compositions and drawings made during the second World War in London. 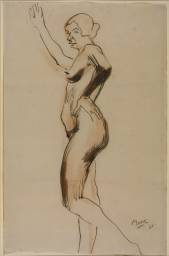 The works are presented according to the turbulent events which make up twentieth century history. They reveal an often overlooked dark and erotically charged side of Moore’s artwork. The advent of psychoanalysis, new ideas about sexuality, primitivism, and the traumatic events of war ultimately had a lasting effect on the sculpture’s work.

The exhibit reveals an unexpected turn to Moore’s career: Even when his best work was behind him he continued to make original sculptural works differing from his previous oeuvre. After great success an artist will often maintain the same creative intensity for a period of time developing new works after his fortuitous creations, yet this momentum cannot be sustained forever. Moore’s genius lies in his ability to continue to produce along different themes, materials, and genres even after he achieved success. 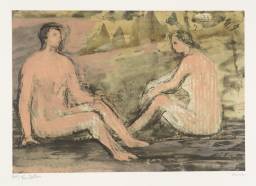 Man and Woman in a Landscape (1984) by Henry Moore, via Tate Britain

In the first gallery the visitor encounters the hand-carved stone figures of the 1920s and 1930s intriguingly formed with a violent undercurrent for works such as the Mask (1930) and Mother and Child (1924). These works show an influence from Pre-Columbian art with their strongly carved facial features, monumental body, and finely polished surface. 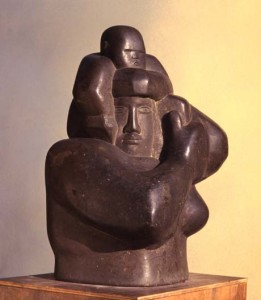 Mother and Child (1924) by Henry Moore, via The Henry Moore Foundation

Subsequent galleries present the artist’s work of the 1930s which is at once dreamlike and surreal telling of his  influence under Picasso and Giacometti. Moore’s Shelter drawings are also highlighting and reveal his memories of life in the trenches during World War I. The later work which is exhibited profess an increasingly depth to Moore’s oeuvre. His monumental figure carved in Elm between 1959 and 1964 resembles Michelangelo’s figures of Night and Day in the Medici Chapel in Florence. 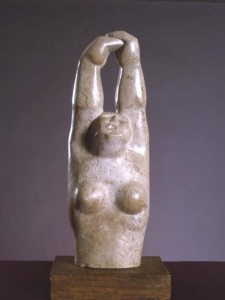 Woman with Upraised Arms (1924) by Henry Moore, via The Henry Moore Foundation

Henry Moore died in 1986. In the years which followed, tremendous developments took place in British sculpture with the arrival of artists such as  Tony Cragg, Anish Kapoor, and Richard Deacon. Even so, Moore’s oeuvre maintained its reputation even with the arrival of the newer crowd. His is a work that continues to mesmerize- tempting us to pause, reflect, and dream.

This entry was posted on Saturday, March 13th, 2010 at 9:39 pm and is filed under Go See. You can follow any responses to this entry through the RSS 2.0 feed. You can leave a response, or trackback from your own site.