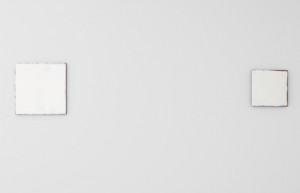 Currently on view at PaceWildenstein Gallery is “Robert Ryman: Large-small, thick-thin, light reflecting, light absorbing” – the exhibition of thirty new paintings of the renowned minimalist American artists. Executed in Ryman’s signature monochromatic palette the paintings on display measure ten to thirty square inches and represent a wide gamut of experimentation in materials, including wood, MDF board, aluminum, and stretched cotton. The works appear strong and indestructible, although painted on the paper-thin material Tyvek. In addition to traditional graphite and ink, Ryman employs such painterly materials as acrylic varnish, enamel and epoxy. To hang the paintings to the walls, the artist will use regular staples, which are a traditional integral part of his aesthetics. 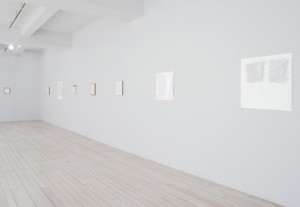 Dedicating the present exhibition to the magical properties of lights and its perception by the viewer, in his statement Ryman writes:  “In my studio I see the paintings with daylight from above, on cloudy and sunny days, and in incandescent light, in various strengths, without daylight. It is not just the intensity of the light, but the direction of the source that is important, and in each light situation the paintings looked different. At one point, I thought I would not be able to show the paintings because I could not know how they would look. How is someone going to know how the paintings work with light? However, I quickly got over that. Paintings don’t have much meaning unless they go out into the world”. 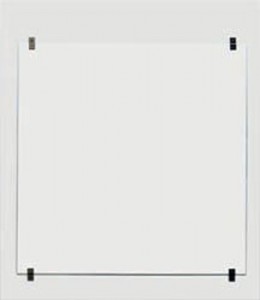 Robert Ryman Vector 1997. In this classic work, the viewer can see the artist’s signature metal brackets. Most recently, Robert Ryman in collaboration with Yasmil Raymond, Curator, Dia: Art Foundation reinstalled the galleries displaying his work at this renowned museum of contemporary art. The artist reinvented the space at Dia, allowing the viewer to see his classic work in the fresh spacial arrangement. Ryman is also planning a major re-installation in Hallen fuer Neue Kunst, recreating the exhibition into Gesamtkunstwerk – a synthesis of his three decade long creative output. 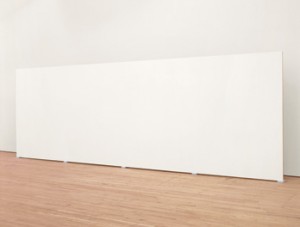 Classified by art historians as “minimalist” and “conceptual artist”, Ryman prefers the title “realist” , claiming that in his work he attempts to represent materials at their face value. His most prominent quote is: “There is never any question of what to paint only how to paint.” The exhibition at PaceWildenstein is on view until March 27, 2010.

“It’s estimated that as many as 98,000 hospitalized patients lose their lives each year in the United States because of medical errors that could have been prevented. While standardized reporting and safety checklists have been shown to improve communication and patient safety, implementation of these tools in hospitals remains challenging,” scientists in Long Beach, United States report (see also Nursing Research). site adult learning theory

“To implement standardized nurse-to-nurse reporting along with safety checklists at Mission Hospital, a 522-bed facility in Mission Viejo, California, using Lewin’s change theory and Knowles’s adult learning theory. Nurses were tested to assess their knowledge of the standardized nurse-to-physician reporting method called SBAR (Situation, Background, Assessment, Recommendation), their understanding of the concept of the nurse-to-nurse reporting method called SBAP (Situation, Background, Assessment, Plan), and the use of safety checklists. Then, after viewing a 22-minute educational video, they were retested. A total of 482 nurses completed the pretest and posttest. On the pretest, the nurses’ mean score was 15.935 points (SD, 3.529) out of 20. On the posttest, the mean score was 18.94 (SD, 1.53) out of 20. A Wilcoxon matched-pairs signed-rank test was performed; the two-tailed P value was < 0.001," wrote J.D. Stevens and colleagues. this web site adult learning theory

The researchers concluded: “The application of Lewin’s change theory and Knowles’s adult learning theory was successful in the process of implementing standardized nurse-to-nurse reporting and safety checklists at Mission Hospital.”

This entry was posted on Monday, March 15th, 2010 at 5:00 pm and is filed under Go See. You can follow any responses to this entry through the RSS 2.0 feed. You can leave a response, or trackback from your own site.