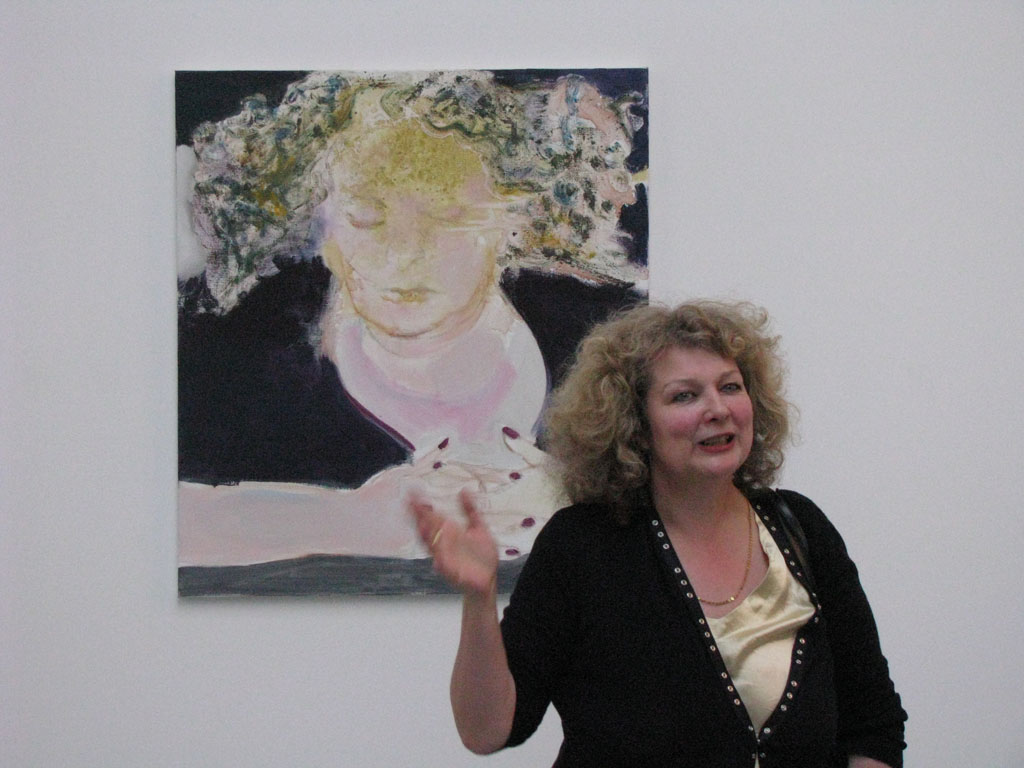 Marlene Dumas in front of self-portrait The Sleep of Reason, 2009, press preview for Against the Wall

Marlene Dumas’ practice is two-fold: on one hand conveying politically potent messages that are more often than not critical, and on the other being deeply concerned with the surface, aesthetic potential of paint.  One is forced to question whether these seemingly disparate objectives marry well at all or compliment each other? However the tension between the two are played out, and resolved in the artist’s exciting first solo exhibition at David Zwirner, through April 24.

Marlene Dumas and David Zwirner in front The Sleep of Reason, 2009, press preview.

In Howard Halle’s review of the show for Time Out, he admits that, previous to this show, he was never entirely convinced by Dumas’ work or status. However, for Halle, in this show her painterly style “don’t seem to get in the way of her main subject.” Patently it is his thinking that the subject of the show is entirely political: the Middle East, specifically Israel’s treatment of the Palestinians. Indisputably, the show is largely powered by its political sentiment; the wall is the central motif here – it is imposing, even threatening and is certainly being criticized.  The centerpiece, opening the show immediately in front of the entrance is The Wall, 2009, made provocative by the ambiguity of the wall’s identity. Depicting a group of orthodox in front of what one initially assumes is the Western Wall (or Wailing Wall) an important site of religious pilgrimage, but is in fact an Israeli security fence outside of Bethlehem.  The ambiguity is continued and it is used to further political criticism where in Wall Weeping we might believe the figures to have their arms raised in prayer, later in Wall Wailing we understand that in actuality they have them raised in ordered for soldiers to search them. In Wall Wailing particularly the visual vocabulary is remarkably reminiscent of Goya’s The Shootings of May 3, 1808, and Manet’s Execution of the Emperor Maximilian, 1867. Though her paintings do not have the explicit violence of those images they seem to have the same potential for danger – it is looming. Equally, they share the element of political mistrust and threat. 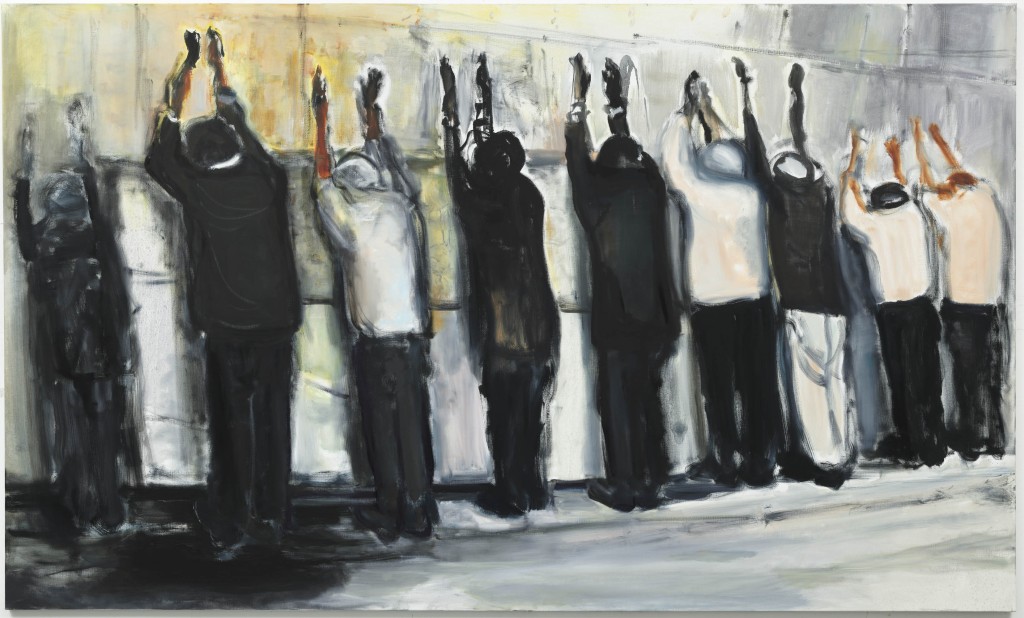 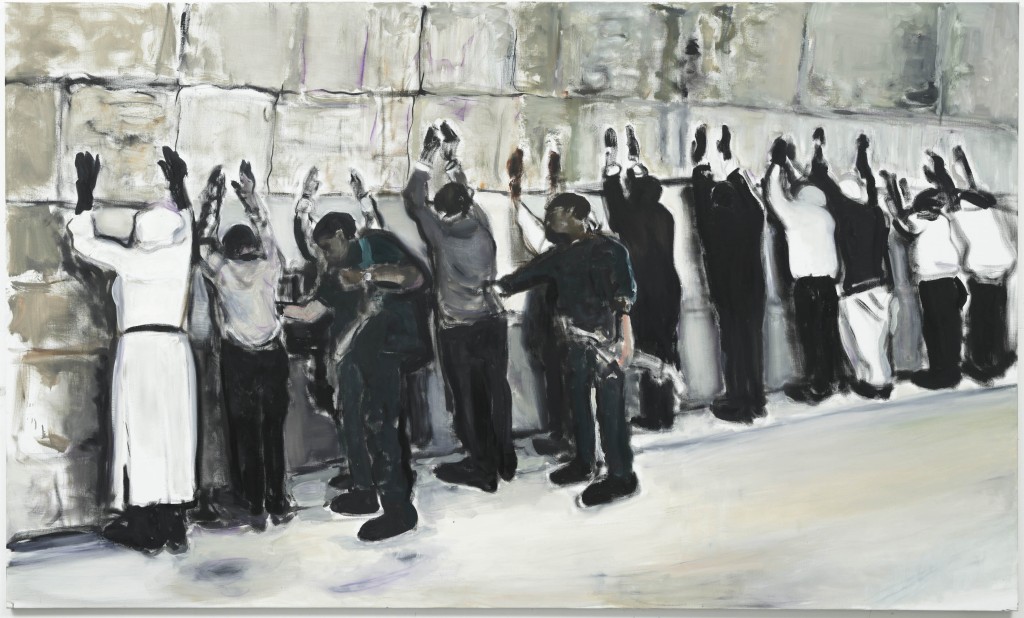 Are themes in Dumas’s work irrelevant or do the works transcend the original theme and move to the universal?  The use of the wall motif as a metaphor for segregation and exclusion, as well as a physical marker of territory, is very much inflected with a sense of Dumas’ personal experiences; more specifically her experiences growing-up with apartheid in South Africa. As Dumas uses preexisting images, which she finds and translates in paint, she is constantly blurring the original message, merging what was once a specific moment with others from her life or art history. Dumas plays with the subjectivity of the acts of looking, documenting and perceiving – manipulating our understanding of the scene we are viewing, teasing out the ambiguities in each image.  In conversation with ArtObserved, Dumas explained that she uses her collected images like preliminary drawings: “to get a bit of composition and the I let it go and run with it.” Consequently, the images do not necessarily rely on the original source for their meaning. As the press release aptly states Dumas’ work “explores the tension between the photographic documentation of reality and the constructed, imaginary space of painting.” 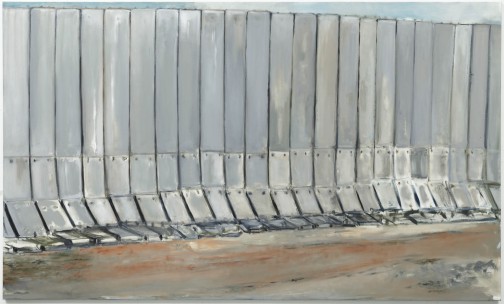 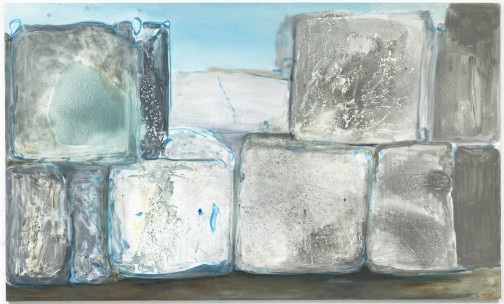 Most importantly, however, this show marks a significant point of departure in Dumas’ practice; for the entirety of her artistic career the human figure and face have been her subject and here for almost the first time she turns her hand to space, architecture, and most unusually still life. Dumas explains that the second painting she completed for the exhibition, Under Construction, “was very hard to manage on a mental level because I have always used a figure, and I always used the human body as my main metaphor, and for once I did not do that.” She continued, “I never liked architecture, I never liked concrete. So that was a bit difficult to work on when you have a structure as your main object. I have never liked straight lines either – I’m not any good at them.” 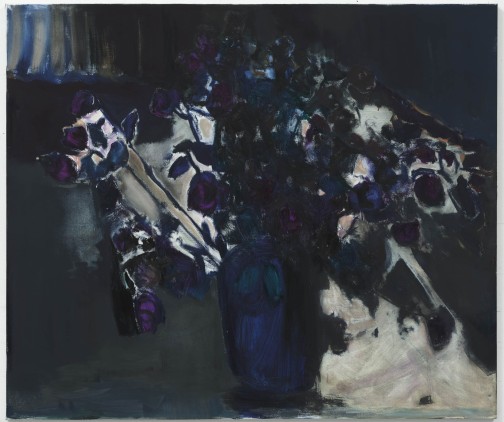 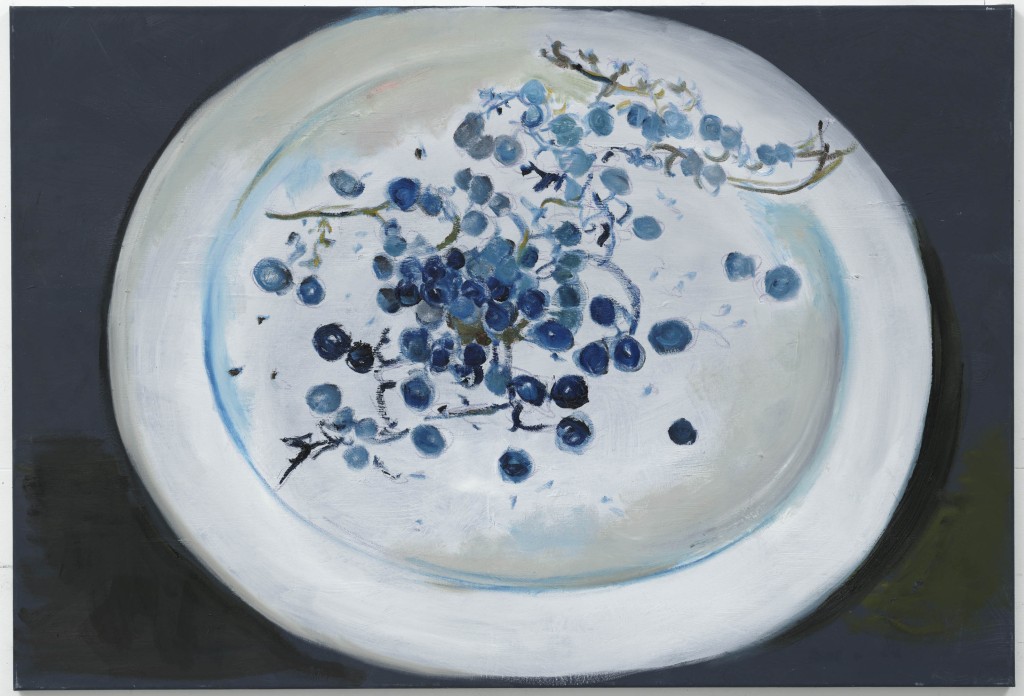 In an article from 2008 for the New York Times, Deborah Solomon noted that Dumas avoided the typical Dutch temperament, affection for the everyday things of this world. However, Dumas told her “I still want to try before I die to do a tree,” for our final fun question we asked the artist how she felt having finally achieved this: “It’s interesting you mention the tree because I’ve always thought it must be possible to make a portrait of a tree. They are as strong and as attractive as a human being but I felt I never could do it. Then I started thinking and reading about all the different types of trees that are being removed to build the Wall, because in order to build the Wall it takes up space and it takes over space. So then the link was the olive tree and the wall. Then I began to think about the religious connotations with God, and the burning bush, and Moses. All these different things were going through my head and I thought, finally, I would try and paint a tree. But then I realized years ago I stayed in some woods, I did not know what to do there, and I was staying in a little house. I did do one work where I took the branches of a tree – I wanted to be close to the earth – and dipped them in ink and paint. I had thought I had never painted a tree before but I suddenly thought, oh my goodness – I had done it. And even though it is different it is almost as if you are sure to always go back to things.” 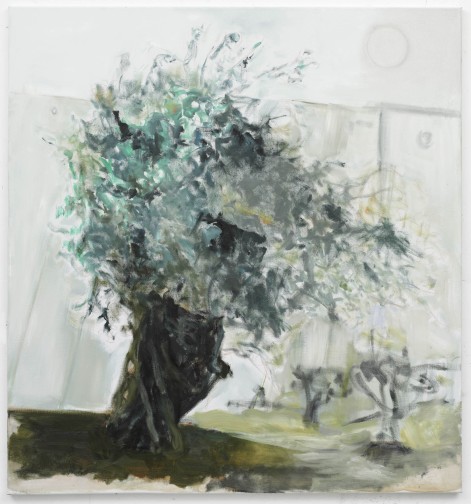 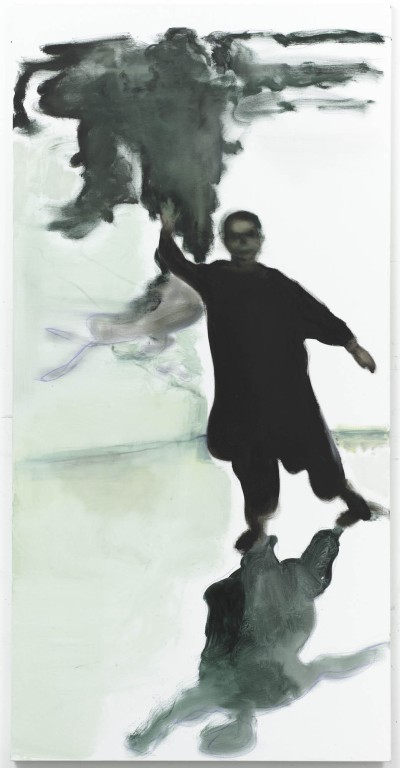 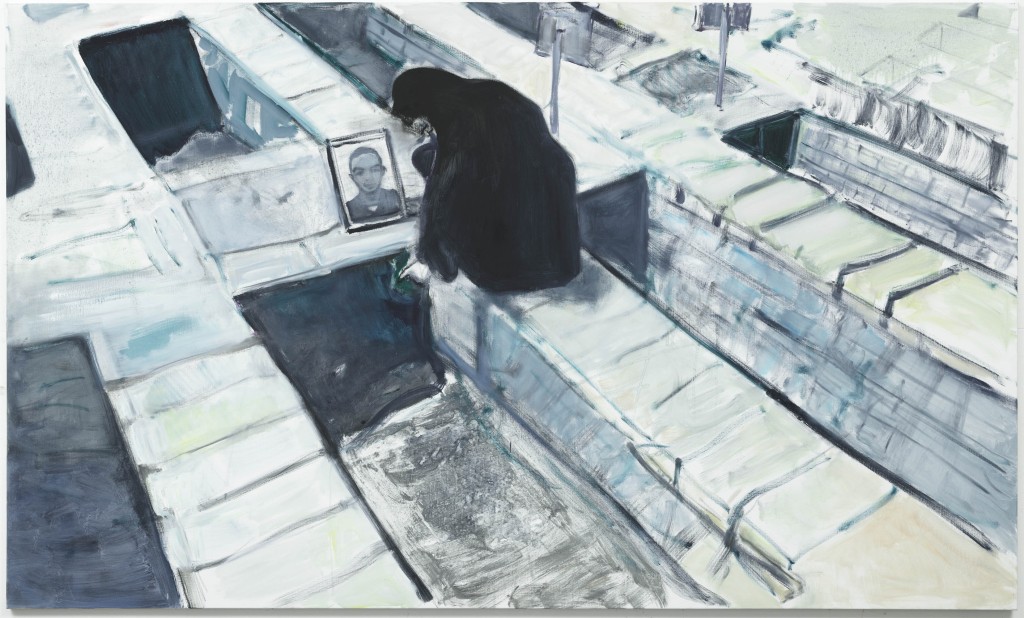 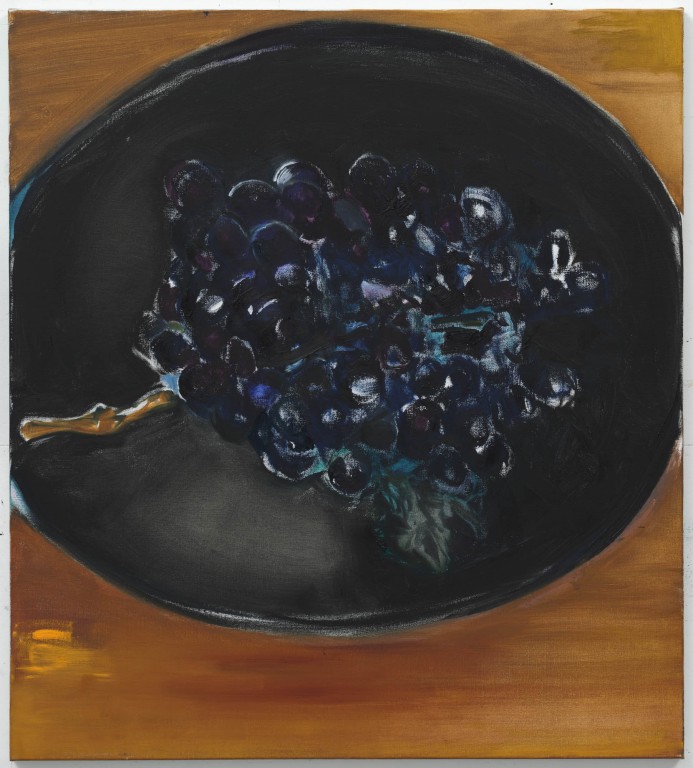 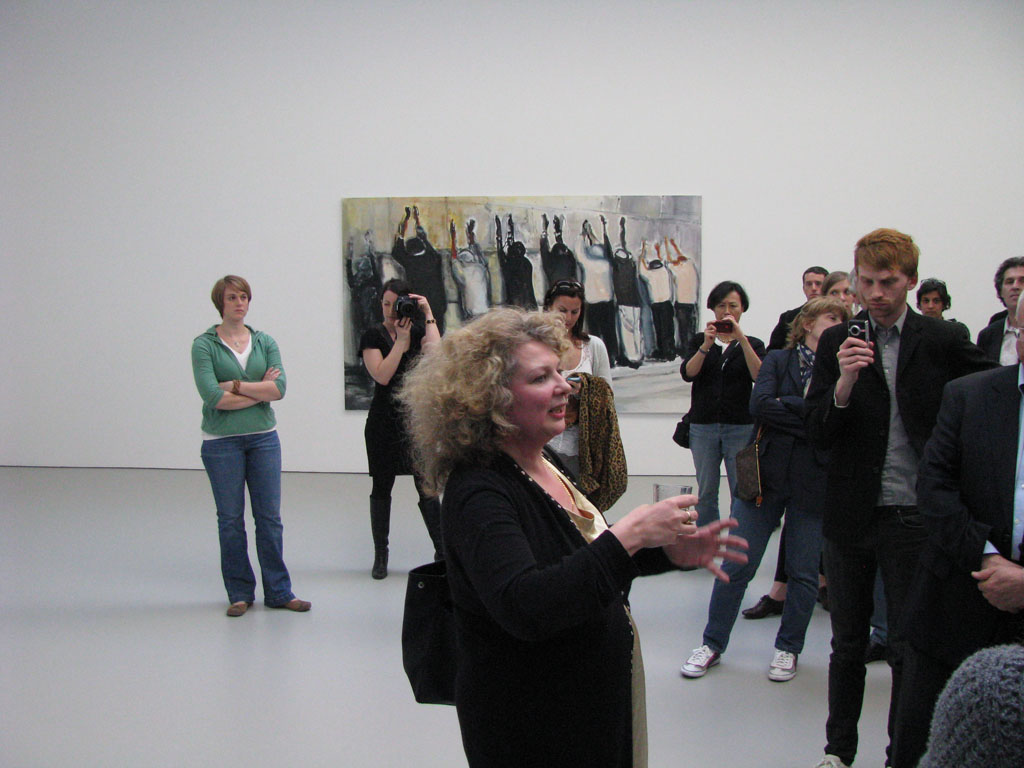 Marlene Dumas talks to the press at the preview.

This entry was posted on Monday, April 12th, 2010 at 10:32 am and is filed under AO On Site. You can follow any responses to this entry through the RSS 2.0 feed. You can leave a response, or trackback from your own site.