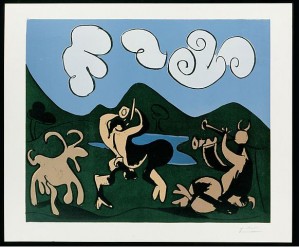 Currently on view at Gagosian Gallery, 3 Merlin Street, Athens is an exhibition titled ” Pablo Picasso:Experiments in Linogravure”. This comprehensive  show explores the late Picasso’s experiments with linogravure, a particular kind of printing technique that he favored during the final years of his creative activity. The exhibition is on view until May 1, 2010.

More texts, images and links after the jump… 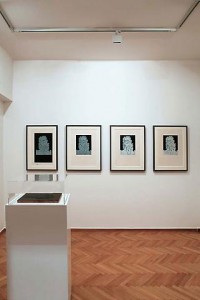 Linogravure is a printmaking technique, a variant of woodcut in which a sheet of linoleum (sometimes mounted on a wooden block) is used for the relief surface. A design is cut into the linoleum surface with a sharp knife, V-shaped chisel or gouge, with the raised areas representing a reversal of the parts to show printed. The linoleum sheet is inked with a roller and then impressed onto paper or fabric. The actual printing can be done by hand or with a press. In the 20th century,this technique was pioneered  by the artists of Die Brueke Group, among them Emil Nolde, during the early 10’s. Since then, linogravure was widely used by Henri Matisse, Pablo Picasso, and later, Georg Bazelitz. 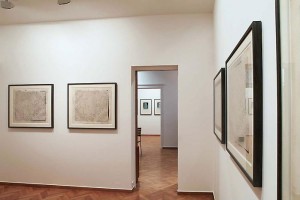 By the late 1950s Picasso was spending most of his time in the south of France and the distance between him and his Parisian printers became increasingly difficult.  Increasingly he turned his attention to linocut, a technique that permitted him to work independently. His first linocut Toros en Vallauris (1954) was a simple black-and-white print. For some time, the artist had been exploring the monochromatic palette.

One of the first monochromatic linocuts by Pablo Picasso, 1954

By 1959 he was using the technique as a complete means of expression, producing works in color.

Between 1959 and 1962 Picasso made about 100 linocuts using this new approach. Subjects ranged from Jacqueline Roque, his muse, wife, and constant companion in the gaily colored Portrait de Jacqueline au chapeau de paille multicolore, illustrated below, to old master portraits such as the series Portrait d’homme à la fraise (Variation d’après el Greco), illustrated below,  where he pays homage to the great Spanish artist, only adding his signature distorted facial features to his variation of the classic composition.

In the 60’s, Picasso began experimenting with an even more unconventional variation of the linocut, demonstrated by L’Etreinte 1 (Embrace), illustrated below. 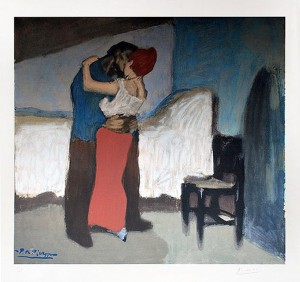 This technique involved printing a linocut in cream ink onto white paper, and then painting the same sheet of paper with black China ink. The paper was then rinsed in the shower, which Picasso claimed to have enjoyed doing himself. The black ink was absorbed into the unprinted areas, but otherwise repelled by the greasy cream ink. This technique produced an image which looks as if it has been painted as much as printed. 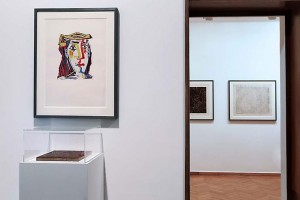 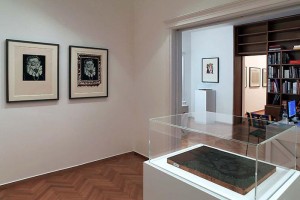 This entry was posted on Thursday, April 8th, 2010 at 12:25 pm and is filed under Art News. You can follow any responses to this entry through the RSS 2.0 feed. You can leave a response, or trackback from your own site.