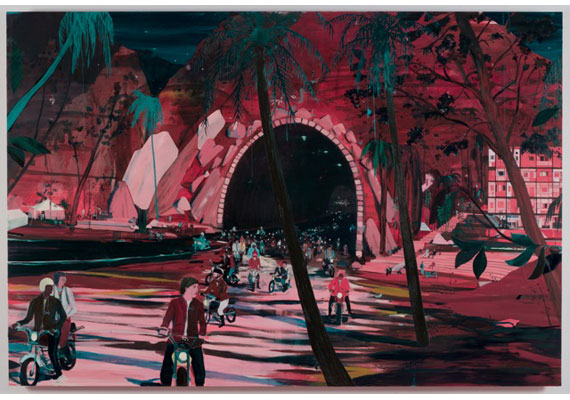 Premonitions, Jules de Balincourt’s current solo show at Deitch Projects, is an implausible explosion of color, imagery, and imagination.  Aptly named, the show teeters between storyboarded recollections of drug induced hysteria and the dreamscapes of an apocalyptic premonition, for lack of a better word. The viewer is expected to jump head first into a world where imagination and chance reign supreme. 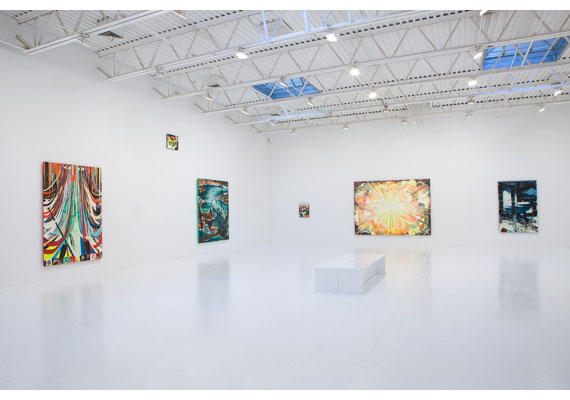 More Text and Images after the jump. . . 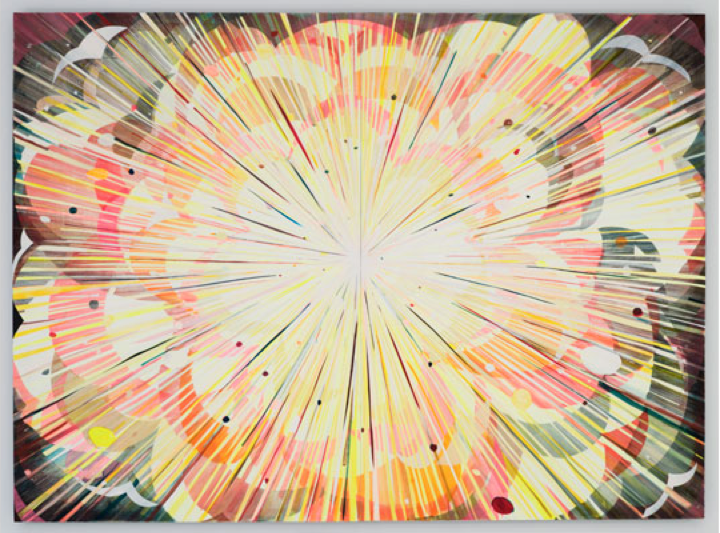 Highlighted in the center of the gallery, the piece Power Flower (2010, 96” x 132”), a mural sized painting depicting, if not the apocalypse, at least a large explosion, performs as the axis point from which all the other pieces radiate out. This illustration of wild energy infuses the narratives in the rest of the show. For example, in the wake of whatever has occurred, all races seem to come together as depicted in such pieces as A Few Good Men (2010, 20” x 26”) and Out of the Darkness and Into the Light (2009-2010, 80 ¼” x 70 ¼”) 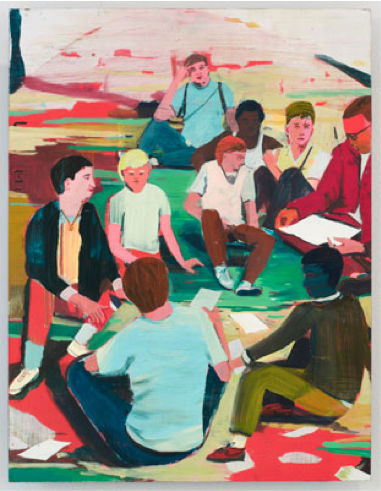 We are also presented more ominous images. For example, Dismounted (2010, 40” x 46”), where the painted out ghost of a mounted horseman sits atop his piñata-like steed standing to attention, still attached to a sled that may have been used to carry wounded or dead from the field. This is actually one of the strongest pieces in the show as the colors, composition, and painterly execution all come together harmoniously. 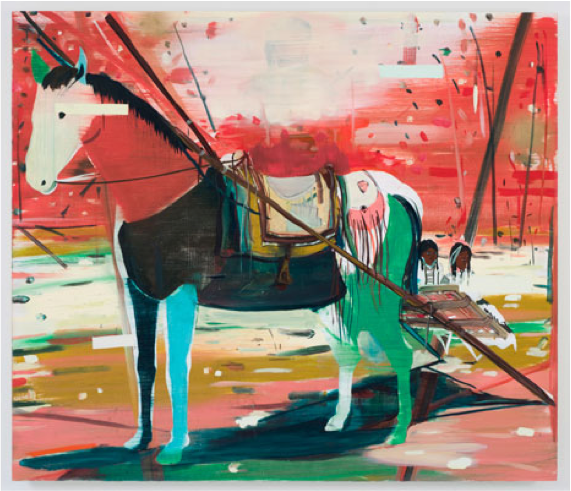 In addition, there are three wizards, gods, or spirits that watch over Premonition. First, Hawkes and Doves (2010 48” x 56”), whose haunting gaze stares out from behind a pixilated bushy beard and brow, forming the wings and tail of a soaring bird. Second, Eyes of a Fortune Teller (2010, 80” x 96”) whose bespectacled eyes are multiplied and digitally distorted as if by cosmic interference, surveys the room. Last and more subtle, Speculator (2010, 65” x 96”) stands looking out from beneath a broken red halo amidst colored streamers with open arms carrying a scepter in one hand and blessing us with the other. 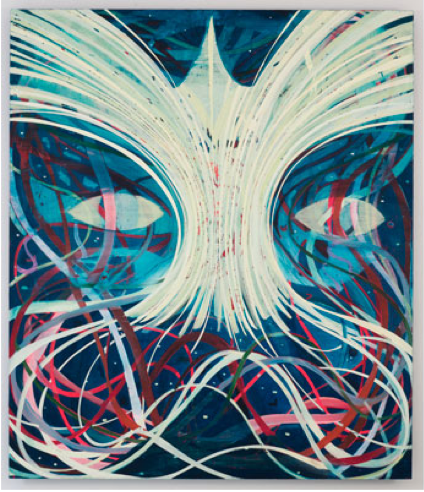 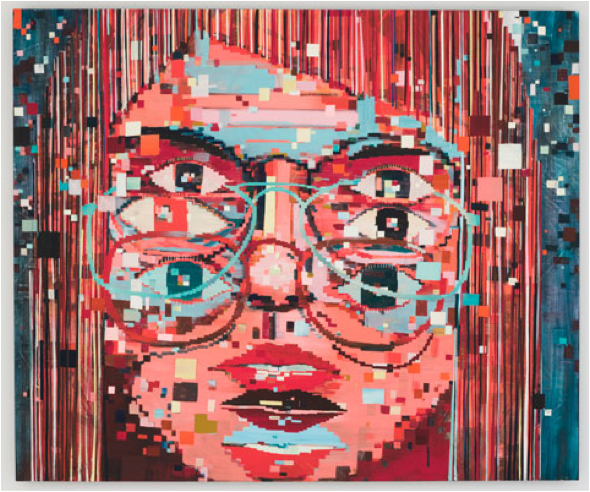 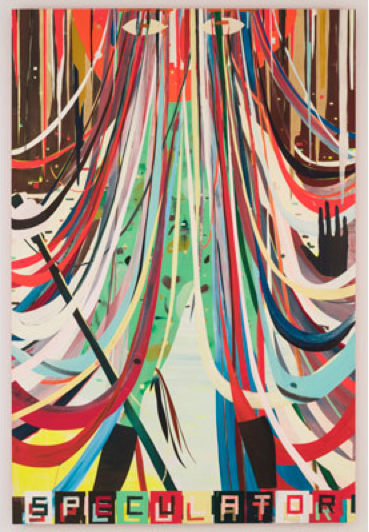 Jules de Balincourt employs text, abstraction, and figurative elements all in the same composition. His bold audacity and confidence in his imagination produces exciting and unexpected results.  Covering a lot of ground, this show’s compositions suggest ideas of technology and identity, politics and subversion, and faith in a higher power. No matter what our take on the subject matter, de Balincourt is prodding us to jump right in and join him in these bizarre experiences. 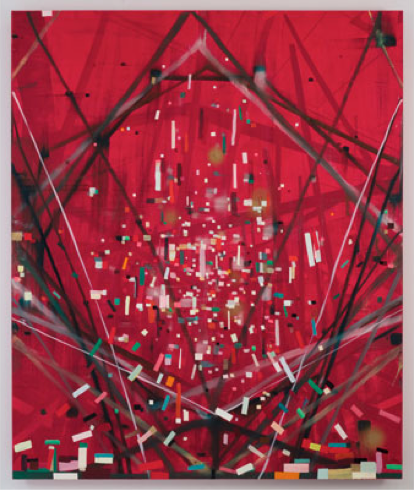 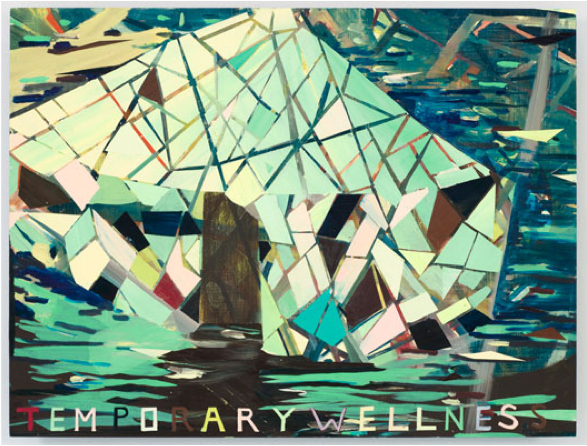 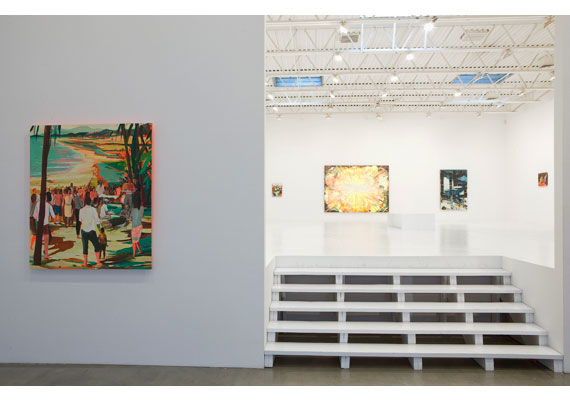 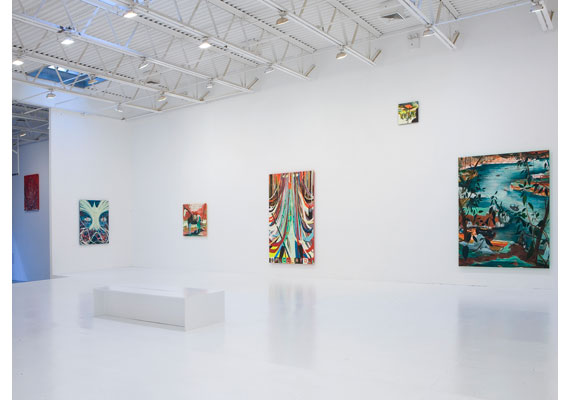 This entry was posted on Tuesday, April 20th, 2010 at 4:19 pm and is filed under Go See. You can follow any responses to this entry through the RSS 2.0 feed. You can leave a response, or trackback from your own site.