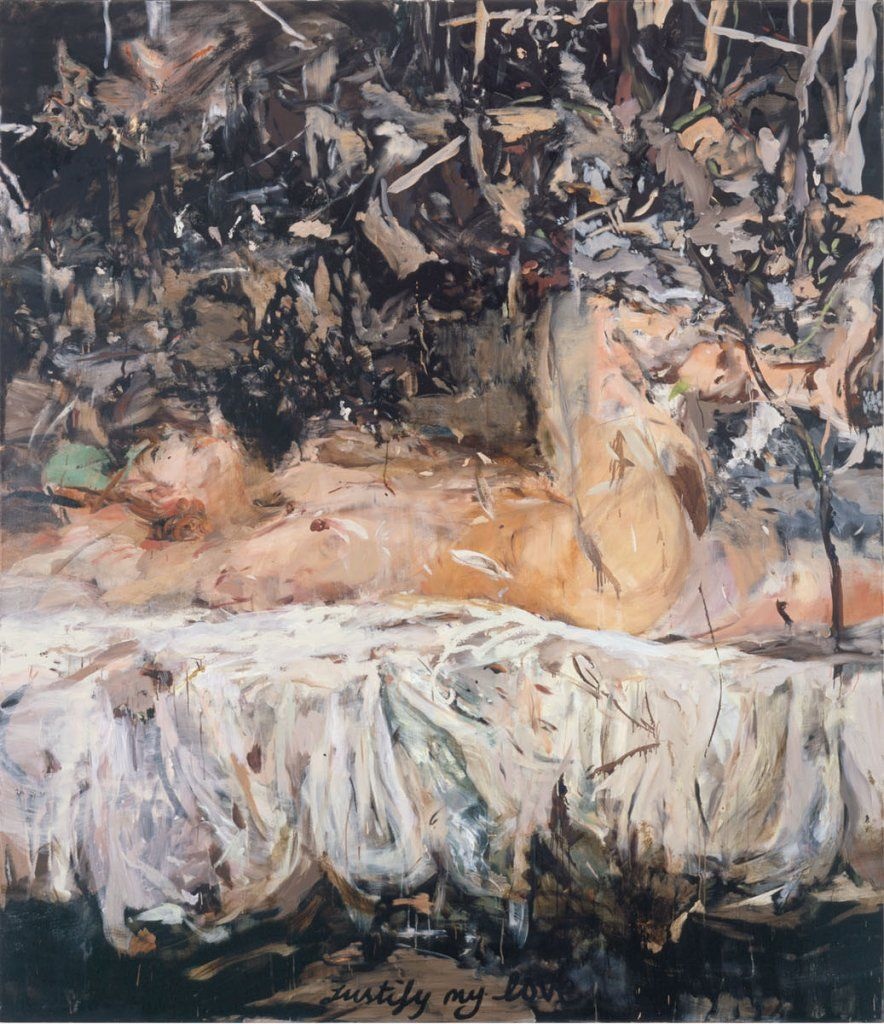 Cecily Brown‘s exhibition at the Contemporary Fine Arts, Berlin, features large-scale oil paintings on canvas and linen.  Brown camouflages her subjects, often females in torrid positions, within alternately muted and frenzied colors and animated brush strokes.  Her use of blurred lines and monochromatic colors forces the observer to look carefully to discern the action of the painting.  Brown employs figuration and expressionism in this exhibition, which combines lush landscape paintings with motifs of sexuality and attraction.

Brown’s later, Eden-like landscapes suggest fertility and femininity, while her earlier paintings, set indoors, are often more explicit.  Brown’s experimentation with color has similarly evolved over the course of the past decade. 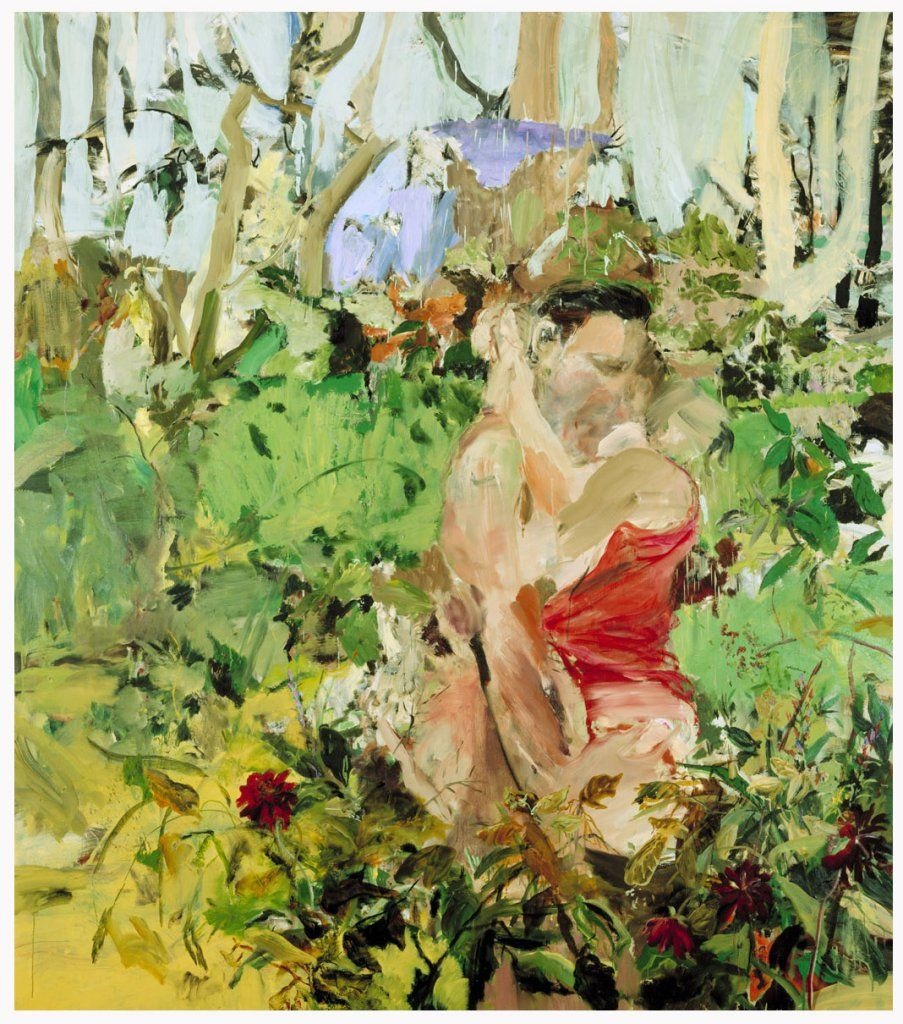 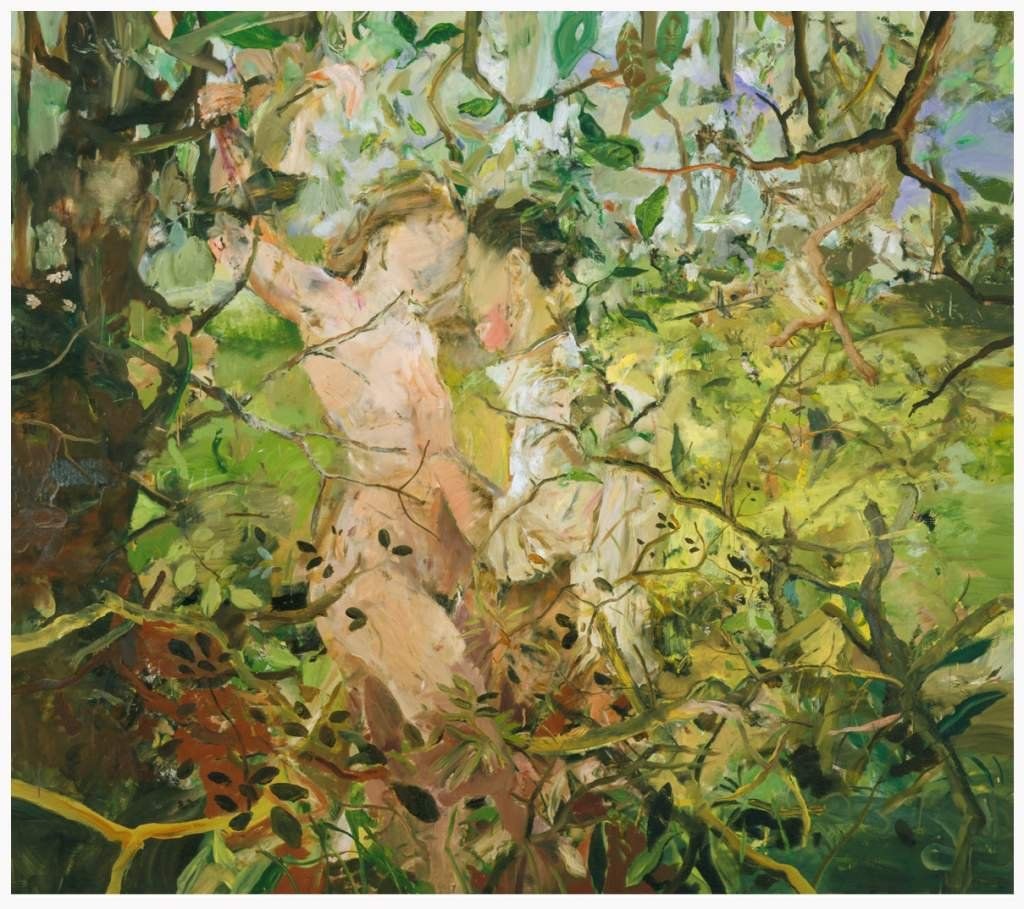 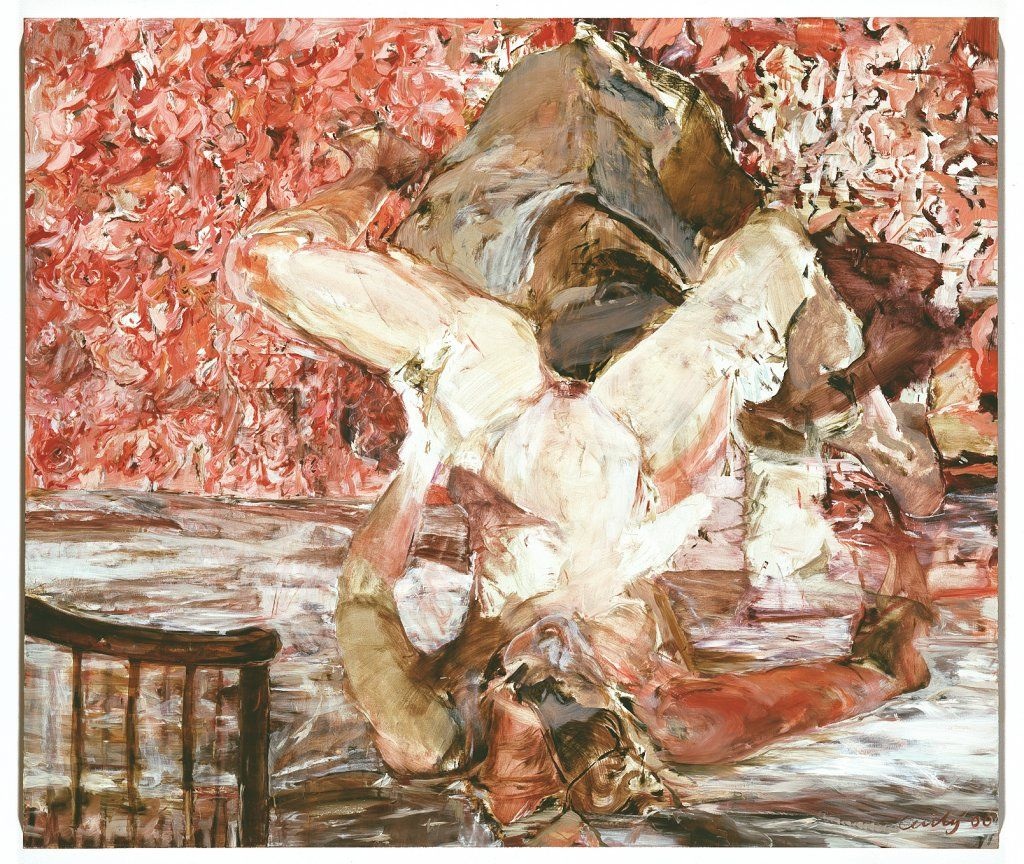 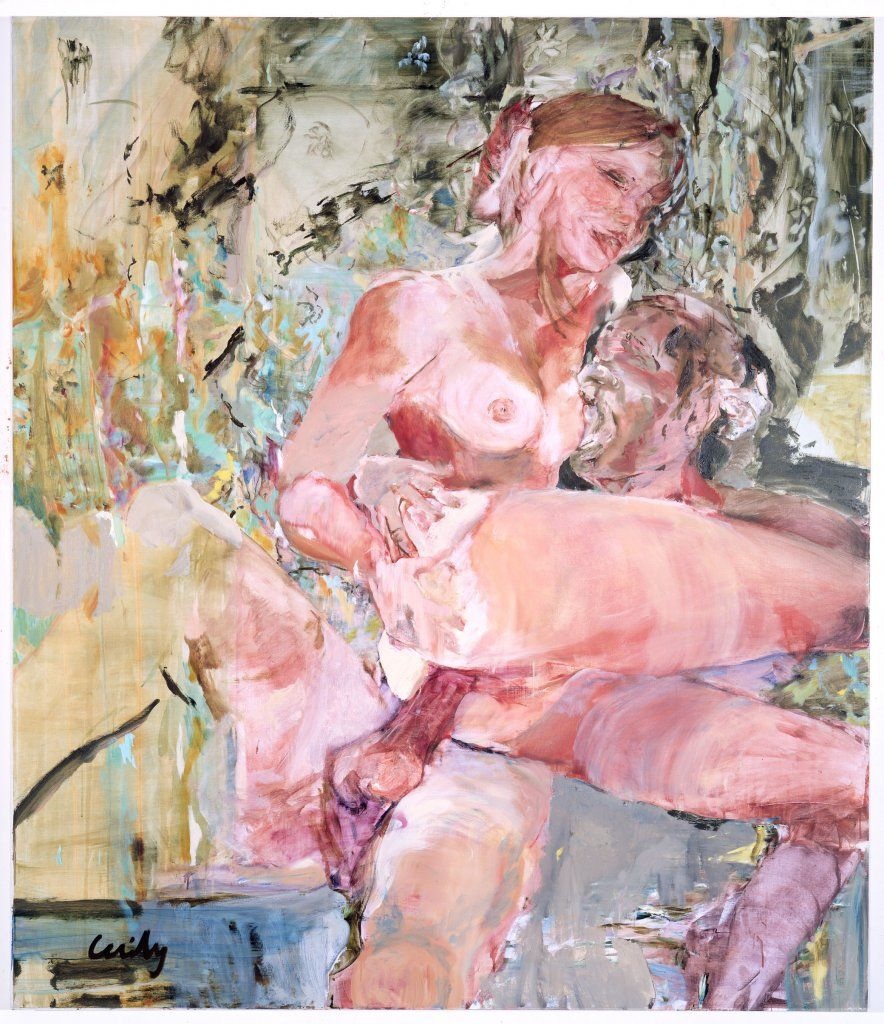 In a 2005 interview, Brown mused on her style: “I think when I was doing a lot of sexual painting, what I wanted–in a way that I think is not too literal–was for the paint to embody the same sensations that bodies would.  Oil paint very easily suggests bodily fluids and flesh.”

Cecily Brown’s paintings will be on display until June 5th, 2010.

AP Online November 4, 2011 | BARBARA ORTUTAY NEW YORK (AP) ? Groupon’s stock sizzled in its public debut Friday despite concerns about its accounting practices ahead of an initial public offering and doubts about the viability of its business model.

The first-day pop for the pioneer of online group discounts was largely expected, though. Not even a gain of about $4 billion in market value ? to nearly $17 billion ? could erase lingering questions about its long-term prospects.

In fact, it may have added to them.

It further sets the stage for the public debut of online game company Zynga Inc., which is expected in the next few weeks. It’ll culminate next year, with the expected IPO of Facebook, one dwarfing them all.

Still, analysts remain worried about the risks concerning the company, especially as the stock price increases.

“Until investors see the full profit model unfold over time, expect this stock to be highly volatile,” said Kathleen Shelton Smith, principal of Renaissance Capital, which operates IPOhome.com. “The first day of trading is typically more about supply and demand. Fundamentals will take over in the long run.” Because the model is easy to replicate, it has spawned many copycats after its 2008 launch, from startups such as LivingSocial to established companies such as Google Inc. and Amazon.com Inc. (which incidentally runs its deals through LivingSocial).

Groupon has the advantage of being first. This has meant brand recognition and investor demand, as evidenced by its strong public debut.

Nonetheless, Chicago-based Groupon Inc. has faced scrutiny about its high marketing expenses, enormous employee base and the way it accounted for revenue. go to site groupon nyc

Groupon splits the money it collects from customers with merchants. But it reported all of its gross billings, not just the money it gets to keep, as revenue. After federal regulators questioned it, Groupon submitted new documents in September that showed that net revenue in the first half of this year was about half of what it originally reported.

Using the new accounting method, Groupon had revenue of $1.12 billion in the first nine months of the year. But it lost $308 million because of high operating expenses. The company spent $1.18 billion on such things as marketing to acquire new subscribers and running its business. Groupon went from 37 employees in June 2009 to 10,418 as of Sept. 30 this year. go to website groupon nyc

By contrast, Google had revenue of $1.35 billion and net income of $143 million in the first six months of 2004 before going public that August. Other than its most recent quarter, LinkedIn has been profitable since last year.

For some longtime IPO watchers, Groupon’s ascent is reminiscent of the late 1990s tech boom ? and bust.

One reason for that is its low “float,” meaning Groupon is selling just 5.5 percent of its available shares. Though not unprecedented, the amount is below that of many prominent tech companies, such as Google (7.2 percent), Amazon (12.6 percent) and LinkedIn (8.2 percent).

“The retail investors buying the stock, I don’t think they were around in the 2000 dot-com bust. I don’t think they have a historical perspective of what happens over time,” said Francis Gaskins, president of IPOdesktop.com. “They are buying based on emotion.” There’s pent-up demand not just for tech IPOs, but IPOs in general, especially from U.S. companies, said Josef Schuster, CEO and founder of IPOX Schuster, an investment firm that specializes in IPOs. And the pre-Thanksgiving offering was good timing for Groupon because it will benefit from the holiday shopping period, he added.

Still, he believes it’s a risky investment in the long run.

“Groupon fits very well into a late 1990s IPO,” he said, citing its low float, which helped drive up demand on opening day.

Though critics abound, not everyone believes Groupon is a disaster waiting to happen.

“They have a real business. They can really make money. They have a really large first-mover advantage,” Wedbush analyst Michael Pachter said. “The downside is that it’s not hard to do what they do.” Still, he said, the fact that Google tried to buy them ? in a $6 billion deal that Groupon rejected ? instead of doing a deals business of its own should account for something (Google eventually started its own deals service called Offers). Amazon’s deals service, meanwhile, are powered by LivingSocial, Groupon’s smaller rival in which Amazon owns a stake. Facebook tried its hand at deals but killed it off in August after four months of testing.

Pachter sees some similarities between Google, a first-mover in the online search market, and Groupon. There have been a lot of online search copycats but Google remains king. And there are opportunities for Groupon, such as targeting its deals beyond geography, based on people’s interests and demographic profiles.

Another Internet darling, professional networking service LinkedIn, saw its stock soar to $122.70 on its opening day in May after pricing at $45. It’s back up now, at $82 ? a possible pattern for Groupon in the coming months.

“I don’t think from today’s trading we can actually say what the long-term value of the company is,” Pachter said. “Let’s see what they do with the cash.” BARBARA ORTUTAY

This entry was posted on Saturday, May 29th, 2010 at 11:21 am and is filed under Galleries, Go See. You can follow any responses to this entry through the RSS 2.0 feed. You can leave a response, or trackback from your own site.