Untitled by Richard Diebenkorn, 1950. All images via Artnet unless otherwise noted.

Currently on view at Greenberg Van Doren Gallery, New York, is an exhibition titled “Richard Diebenkorn: Paintings and Works on Paper 1949-1955″. Organized in cooperation with the Estate of Richard Diebenkorn, this exhibition features thirty-six works on paper  of this well-known American artist, whose early work is associated with Abstract Expressionism. Until the present exhibition, these works have only been seen in museum setting, including the 1988-89 show at the Museum of Modern Art, New York.

Serving in the United States Marine Corps from 1943 to 1945 as an aerial topographical draftsman, the artist developed his own version of abstract idiom, reminding the viewer of topgraphic maps that include whimsical anthropomorphic forms. Characterized by calligraphic lines and shifting fields of color, these works reflect both the broad interest in abstraction shared among many artists of the period, and the diverse landscapes in which Diebenkorn lived during these years before enrolling in at the University of New Mexico in Albuquerque in 1949. 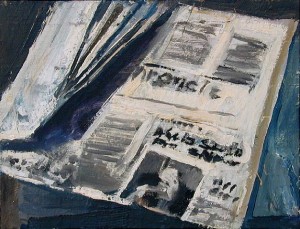 This entry was posted on Monday, May 31st, 2010 at 1:00 am and is filed under Galleries, Go See. You can follow any responses to this entry through the RSS 2.0 feed. You can leave a response, or trackback from your own site.