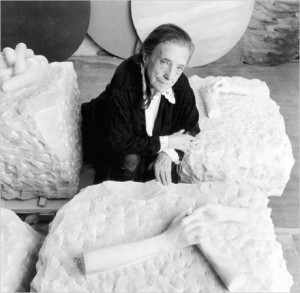 Louise Bourgeois in her Brooklyn studio in 1992. Photo courtesy The New York Times.

Louise Bourgeois, one of the world’s most celebrated sculptors, passed away today at the age of 98. The news was announced by an Italian foundation preparing an exhibition of the artist’s work in Venice, and was confirmed by Wendy Williams, the managing director of the Louise Bourgeois Studio. The cause of death was heart attack, and occurred at the Beth Israel Medical Center. Bourgeois was a leader of feminist art, and is known most recently for her large-scale metal spider sculptures, as well as psychologically-charged roughly-textured depictions of sex organs. 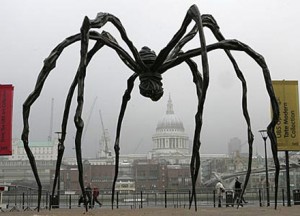 Bourgeois’s 30-ft spider sculpture outside the Tate Modern in 2007. Photo courtesy the BBC.

Highly influenced by painful childhood experiences, her work explores human forms and emotions. “All my inspiration comes from my childhood, from my education, from France at a certain moment in my life,” the artist once said. The subject of her works expresses namely the betrayal and jealousy she felt as a cause of her father’s affair with the family’s governess. 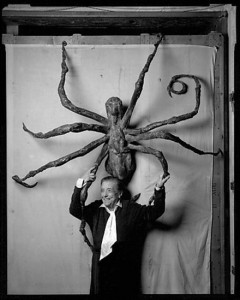 Born in Paris in 1911, Bourgeois studied at the Ecole du Louvre and the Ecole des Beaux-Arts. After marrying American art historian Robert Goldwater, she moved to the US and became a citizen in 1951. She completed her studies at the Art Students League of New York. Although she began with engraving and painting, she worked mostly in sculpture. In 1997 she received the National Medal of Arts, and in 2008 she was presented with the French Legion of Honor medal by French President Nicolas Sakozy. Bourgeois represented America in the Venice Biennale of 1993. In 2000 she created a work for the Tate Modern’s inauguration of Turbine Hall; in 2007 the Tate organized a retrospective of her work which later travelled to the Centre George Pompidou in Paris, the Guggenheim Museum in New York, the Museum of Contemporary Art in Los Angeles, and the Hirschorn Museum and Sculpture Garden in Washington, DC.

Until two days ago, she was actively involved in preparations for the exhibition “Louise Bourgeois: The Fabric Works.” Curated in by Germano Celant in collaboration with Jerry Gorovoy of the Louise Bourgeois Studio, the exhibition is presented by the Fondazione Emilio e Annabianca Vedova. It is to feature little-known works in cloth and sketches from 2002 – 2008, shared foundation president Alfredo Bianchini.

Early in her career, she worked as an assistant in the atelier of legendary French artist Fernand Léger.  She was revered by many contemporary artists, including Antony Gormley and Tracey Emin.  Artist Jenny Holzer stated today that she “orbited Bourgeois” and that “my artist friends and I are crying today.”  She is survived by her two sons, Alain and Jean-Louis, of Brooklyn and New York; she was widowed in 1973 and her son Michael died in 1990. 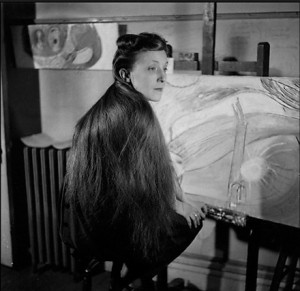 This entry was posted on Monday, May 31st, 2010 at 10:47 pm and is filed under Art News. You can follow any responses to this entry through the RSS 2.0 feed. You can leave a response, or trackback from your own site.